Under the cover of night, two dark-eyed bandits prowled around a Redwood City bank, rifling through trash and knocking over a computer screen in their hunt.

In the office’s break room, they pounced on treasured booty: a tin of almond cookies.

The two juvenile raccoons broke into the Redwood City Chase Bank when it was closed Monday night, ransacking the office before Peninsula Humane Society & SPCA workers chased off the furry vagabonds the next morning.

“This is definitely the first time we’ve ever been called to a bank heist,” said Buffy Martin-Tarbox, communications manager for the Peninsula Humane Society & SPCA.

She said sleuthing animal rescue workers found telltale clues to cobble together a case: muddy paw prints “about the size of raccoons’” tracked up a nearby tree leaning against the bank and three ceiling tiles shattered on the office floor. The animal detectives determined that the raiding raccoons probably climbed the tree to the bank’s roof and entered through the air-conditioning duct, then dropped into the office from the ceiling, Martin-Tarbox said.

“Raccoons are incredibly agile and very curious creatures,” she said. “They find themselves in all kinds of circumstances — and these two were exceptional.” 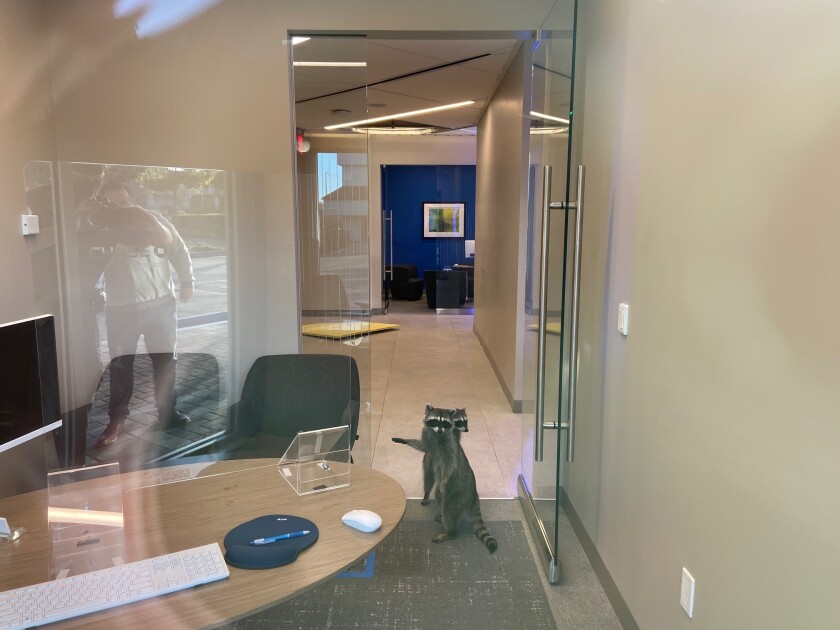 The two raccoons gave Peninsula Humane Society & SPCA workers a chase before being herded out of the bank Tuesday morning.

Rohan Joshi, 34, didn’t realize he was entering a crime scene when he approached the Chase Bank ATM to make a deposit about 7:30 a.m. Tuesday. He glanced into the bank’s window and noticed, sitting atop an employee’s desk, a stuffed animal — one of the thieves in disguise.

“I just didn’t think anything of it until it moved, and then I was like, ‘Wait a minute, that’s something real,’” Joshi said with a laugh. “I was wondering how he got in there without the alarms going off. It was just the funniest sight to see.”

Joshi called the Peninsula Humane Society before heading off to work on his construction job.

The Peninsula Humane Society & SPCA workers responding to the case tried to examine the raccoons for any injuries from their ceiling fall, but “they did not want to leave the bank,” Martin-Tarbox said. After about 10 minutes, the two creatures finally retreated, hissing, outdoors.

“They clearly were not injured, because they were giving our officer a chase as he was trying to run around the bank,” Martin-Tarbox said.

No one knows exactly when the culprits launched their larceny, but they had ample time to scuffle through some office supplies before they discovered the break room table and the almond cookies.

“All in all,” Martin-Tarbox said, “a pretty good day for a raccoon.”

Messi on Maradona's death: he will stay with us because he is eternal
Jurgen Klopp: I Don't understand why you can let 2,000 people into the stadium for 60,000 spectators and the same 2,000 into the arena for 9,000
In honor of Maradona can rename the stadium of Napoli
The peak declined from knee surgery. He hopes to return in 4 months
The International Olympic Committee (IOC) and the Russian Olympic Committee (ROC) expressed their condolences over the passing of Argentine football player Diego Maradona
The Ceferin, founder of Maradona: He had genius and charisma. One of the greatest icons of world football
Nepomnyashchy recalls how he beat Maradona at the world Cup: asked him to foul, shook hands after the match, and now compared with Yesenin
Source https://www.latimes.com/california/story/2020-10-22/2-masked-bandits-break-into-a-redwood-city-bank-the-culprits-raccoons

Pregnant Hilary Duff Reunites With Her Kids After Coronavirus Scare