Three Bay Area counties — Contra Costa, Marin and San Mateo — advanced from the red to the less restrictive orange tier Tuesday in California's reopening plan. They join Alameda, Napa and Santa Clara in the orange, while Sonoma remains stuck in purple and Solano stays red. San Francisco is the only Bay Area county in the least restrictive yellow category.

Contra Costa, Marin and San Mateo's new status paves the ways for reopening some businesses for the first time and expanding operating capacities at those that are already open.

Outside the Bay Area, four other counties made leaps to less severe tiers due to reduced infection spread in their communities.

Glenn and Mendocino jumped from purple to red, Santa Cruz from red to orange and Calaveras from orange to the lowest yellow, allowing new businesses and activities to reopen.  No jurisdictions moved back to a more restrictive tier due to increased virus spread. 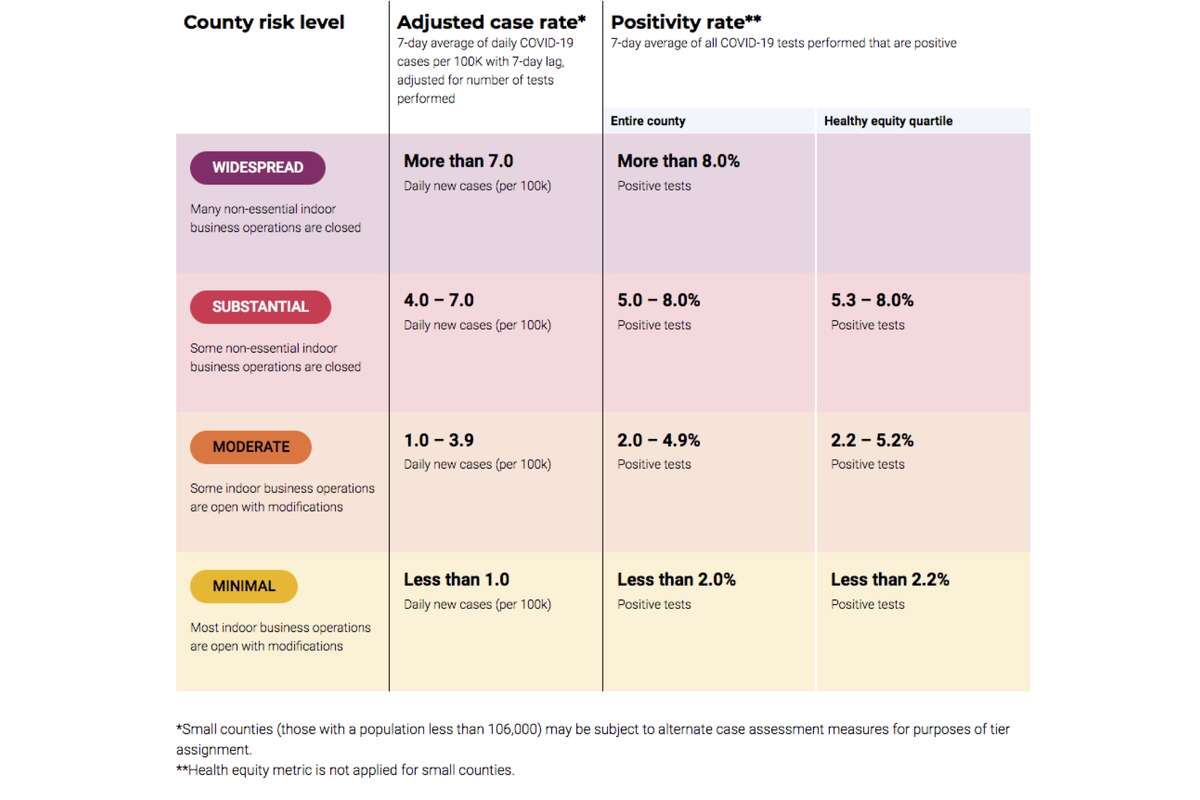 California's reopening plan is dictated by four color-coded tiers. Each county is assigned to a tier based on its test positivity and adjusted case rate.

Gov. Gavin Newsom's system sorts counties into four tiers — "purple" (widespread), "red" (substantial), "orange" (moderate) or "yellow" (minimal) — that measure the spread of COVID-19 and dictate what types of businesses and activities are allowed to open. The structure allows counties to be more restrictive and move more slowly than the state in its reopening if they wish.

Dr. Mark Ghaly, the state's Health and Human Services secretary, pointed out in his regular Tuesday briefing that when the state launched the new reopening structure more than two months ago, 38 of the state's 52 counties were in the purple tier. On Tuesday, only nine counties were purple.

The county tier status is based on the number of new cases per 100,000 residents and the adjusted positivity rate. Earlier this month, the state announced it's now also taking into account an equity metric to address the fact that low-income, Latino, Black and Pacific Islander communities have been disproportionately impacted.

On each day of assessment, the case counts are calculated by taking a seven-day average of daily cases per capita lagged an additional seven days to account for reporting delays.

A county can move backward by failing to meet the criteria for two consecutive weeks, or if state officials see a rapid rise in hospitalizations.

Why is soccer called soccer in the United States (and not only there)? Is it true that this name was invented by the British?
Ole Gunnar Solskjaer: We look at Manchester United through the lens of history. We want to attack and dominate
Koeman on the crisis: We must help Barca in the name of our love for her. We need to think about what's best for the club
Bayer midfielder Bailey named son Leo Cristiano: This has nothing to do with football at all
Tuchel after 2:2 with Bordeaux: I always protect the players, but I refuse to do this. You can't play matches of this level
Ole Gunnar Solskjaer: Any decision I make is for the good of Manchester United. The main thing is the result
Mourinho on Tottenham: We don't have the same conditions as some clubs. They create a crazy market
Source https://www.sfgate.com/bayarea/article/Bay-Area-counties-orange-Contra-Costa-Marin-15679049.php