In a makeshift bedroom in a corner of his apartment’s living room, decorated with a religious altar, Hilario Herrera scrolled through his phone, staring fondly at photos and videos of festivities he hosted in his Huntington Beach neighborhood, when daily life felt less anxious.

There was the time he hosted El Grito, the traditional Mexican Independence Day cry, with mariachi for hundreds of people outside his home along Koledo Lane, in the historic Oak View neighborhood. Or his all-time favorite event, an annual daylong celebration on Dec. 12 to honor Our Lady of Guadalupe.

Autumn was always the busy season for Herrera, one of the unofficial bookers for Oak View, a working-class Mexican enclave in Surf City whose roots reach back generations.

Now, uncertainty looms over the historic barrio, as the COVID-19 pandemic has further choked a neighborhood struggling to survive economically and preserve its culture in a city that has long neglected and ridiculed it as the “Slater Slums,” named after the street that cuts through it.

Oak View residents wonder whether there will be any fiestas navideñas this year, amid state mandates to avoid large gatherings and maintain social distance. A few longtime dwellers such as Herrera, whose family — like many here — emigrated from the south-central Mexican state of Puebla, are thinking about quitting the U.S. altogether and moving back to their ancestral homeland.

“I can’t do it all by myself anymore,” said Herrera, 55, who has had trouble getting hired to cater parties, after he lost his job as a soap factory worker. He now ekes out a living by selling tacos and tamales. “Our neighborhood is rich with culture, but we don’t have any money.”

Yet other Oak View residents resolve to stay, adopting a different strategy: organize to gain political power for Latinos, who make up about 20% of the city’s 199,000 residents, according to 2019 census figures. 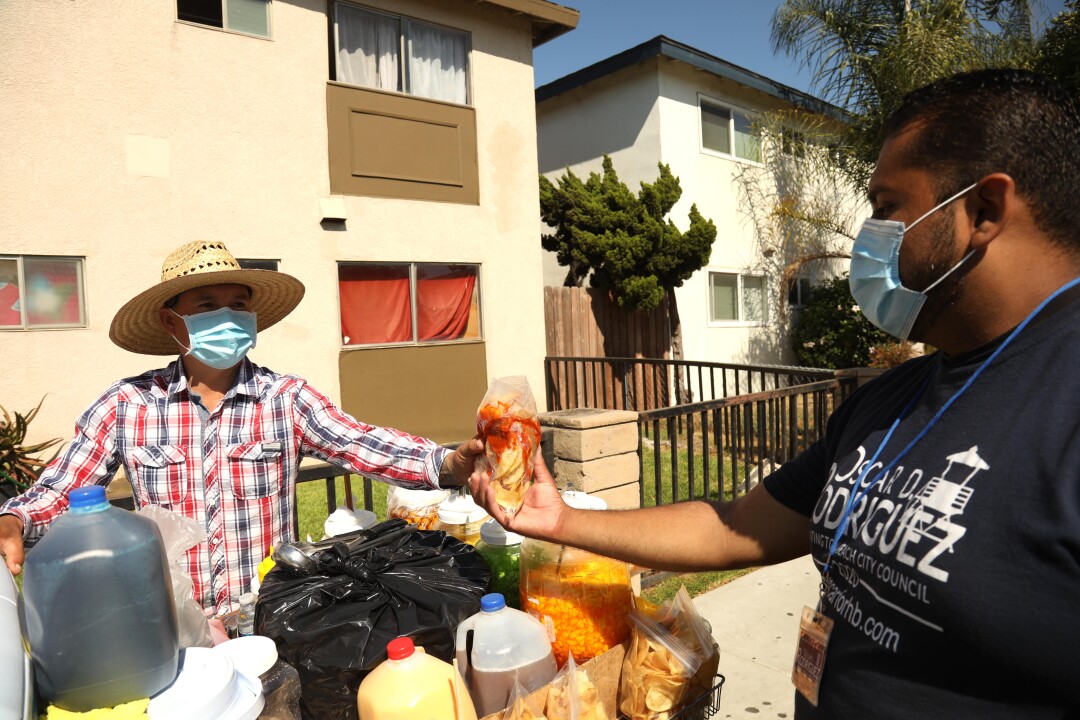 Oscar Rodriguez and Victor Valladares started Oak View ComUNIDAD in 2015 to help mediate disputes between families doubled-up in apartments but also to document the physical changes to the neighborhood, as refurbished apartment complexes began to crop up and raise rents. The grassroots group broadcasts on social media the neighborhood’s tragedies and triumphs, such as its legal victory in getting the waste-disposal plant across the street from Oak View Elementary to enclose its facility and donate millions for a new gym and trees.

Rodriguez is running for a seat on the Huntington Beach City Council, with the endorsement of the Democratic Party of Orange County and the area’s congressman, Harley Rouda. His platform focuses on helping residents who are food insecure during the pandemic, prioritizing affordable housing for working class families, and investing in youth and small businesses. (For a full list of the candidates running for Huntington Beach City Council, please visit https://www.huntingtonbeachca.gov/files/users/city_clerk/Candidate-Contact-List.pdf.)

It’s “not healthy, living with two, three families in apartment buildings,” said the 26-year-old, who attributes his interest in politics to his father’s efforts to improve the Oak View playing fields used by Latino youth soccer teams. “It’s not the way you want to live.”

Rodriguez is up against 14 other candidates, including two other Latinos. If elected, he would be the first Latino elected to the council in recent memory, if not ever. 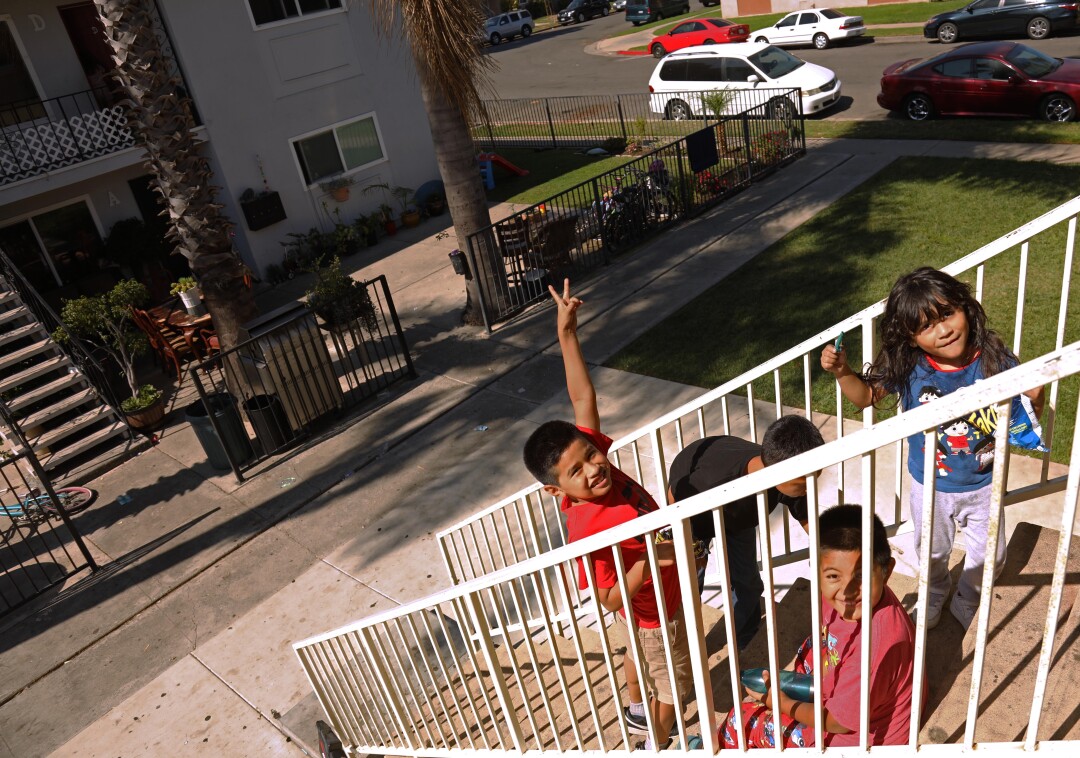 Children play on the staircase in front of their apartment in Oak View.

The square-mile neighborhood presents an alternative Huntington Beach to the postcard-fantasy town favored by sun worshippers and corporate hotel chains, and which has made national headlines in recent years for boisterous — and sometimes violent — right-wing demonstrations. As the city grapples with struggling businesses, revenue shortfalls and homelessness, some Oak View residents have felt forced to leave their community and find cheaper housing elsewhere.

“I feel like we’re facing a growing community with people without housing,” said Laura Lavin, 48, who was drawn to Huntington Beach after being priced out of East L.A. several years ago.

Said Valladares: “I’d walk around with Laura and we’d see obvious telltale signs that these places are gonna be for sale, so we’d warn people and be on the lookout.”

Oak View overlaps with the remains of Wintersburg Village, a former Japanese enclave, including a mission and a former goldfish farm, that the National Trust for Historic Preservation recognizes as an endangered national treasure.

Mexicans who migrated into the region found themselves working in the village or nearby crop fields and started setting down their own roots. They urged families back in Mexico to move into the area later renamed Oak View after Japanese American residents were incarcerated during World War II. 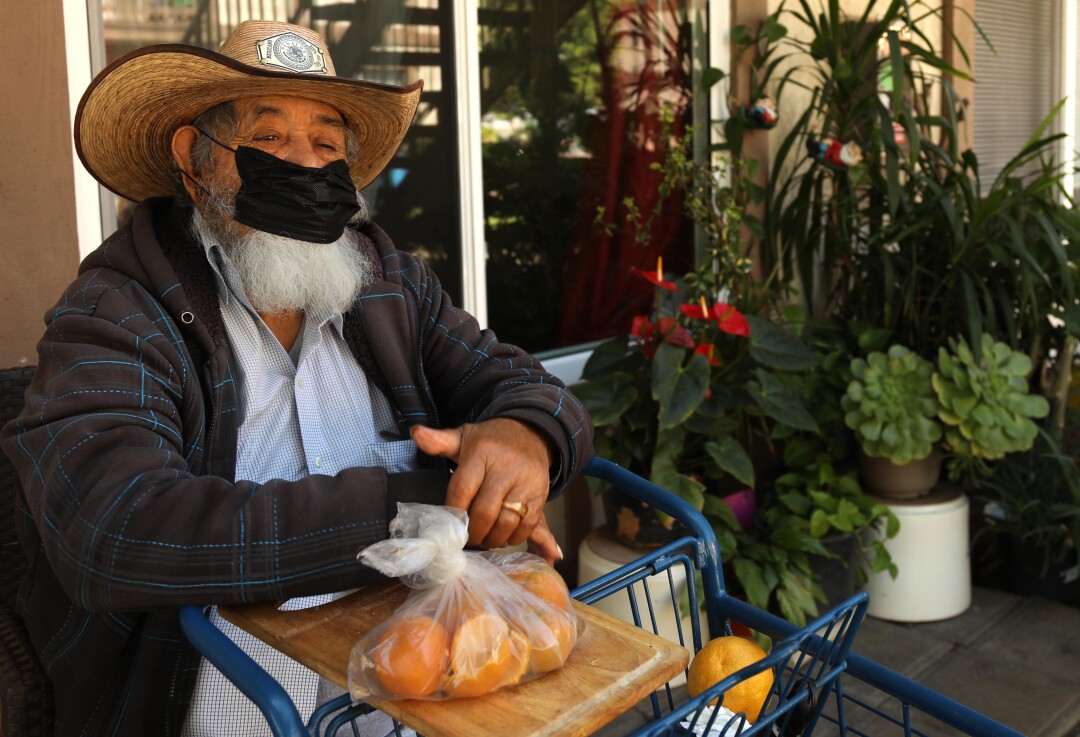 Ricardo Brito Miranda, 84, sits in front of his Oak View apartment, where he has lived for 40 years.

By the 1980s, Oak View, bounded by Beach Boulevard, Gothard Street and Warner and Talbert avenues, had become a predominately Spanish-speaking neighborhood.

The area is home to two schools, a modest park, and a mishmash of renovated and rundown apartment complexes as well as a cluster of affordable housing units. Latino residents who couldn’t travel far or needed to supplement their income created their own businesses.

“We were looking for Mexican neighborhoods where we could sell our products, and Oak View was perfect for our business,” said Roberta Hernandez, 57, who first lived in a friend’s Santa Ana apartment when she and her husband moved to the United States from Morelos, Mexico. They sold spices and dried chili from their truck for 25 years in Oak View until she couldn’t keep up with the $1,900 monthly rent and moved north of the 405 to the unincorporated community of Midway City.

“I had everything well-organized and people would always look for my produce. Many don’t have cars and they won’t visit me in Midway City until I have time to drive out there.”

While Hernandez misses her old business, and finds her new neighbors to be “very reserved,” she doesn’t miss the gunshots that occasionally rang out in Oak View or the young men hanging out drinking and smoking reefer.

“The truth is that neighborhood is no longer safe,” she said of Oak View. Her new residence, by contrast, is “a quiet community that one sleeps in very comfortably.”

Rodriguez’s campaign has excited many locals. He’s one of the few Oak View residents ever to run for elected office in Huntington Beach. 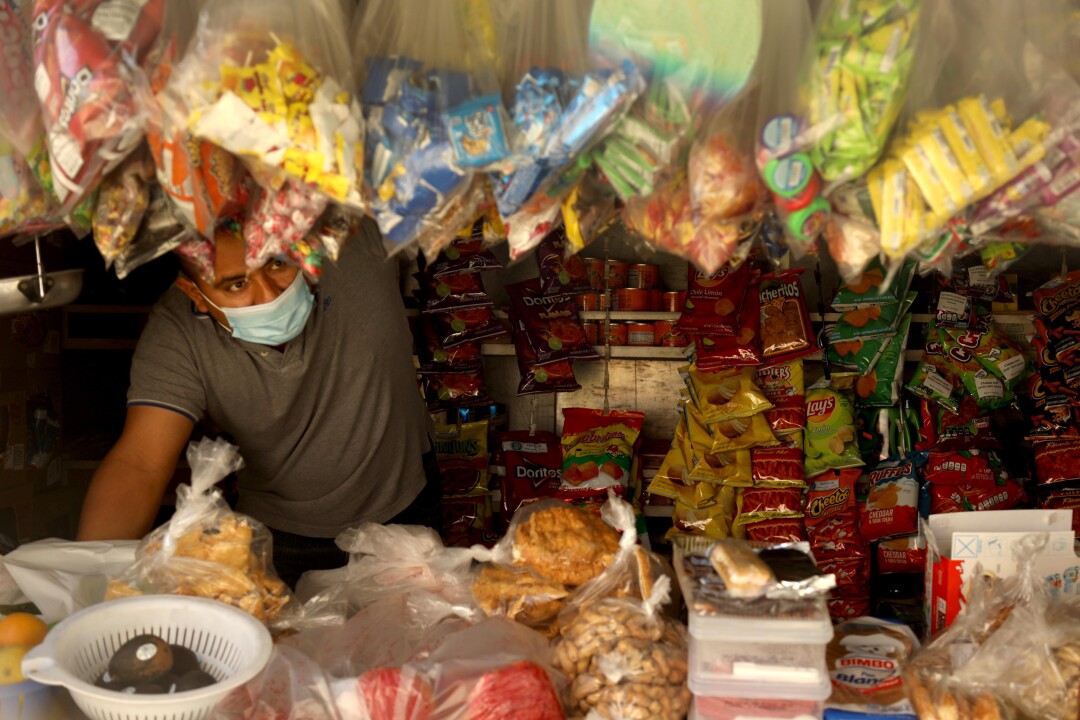 Cristobal Guttierez, owner of Pueblo Produce, watches for customers from inside his food truck in Oak View.

Gina Clayton-Tarvin, president of the Ocean View School District Board of Trustees, said she identified Rodriguez as the person to collaborate with to legally challenge the trash facility. “We knew him from running this amazing soccer league for years. He was already leading the charge.”

Oscar Maldonado has seen Rodriguez’s campaign signs and met Valladares earlier this year. Inspired to help his fellow Latinos, Malondado started working with ComUNIDAD by helping distribute food every Friday to those in need.

The 18-year-old said that his activism has opened a path for him and his family out of what he describes as “the ’hood” and away from Oak View’s long-established street gangs.

“Everyone I used to call my friends are troublemakers,” said the high school senior, who also holds down a janitorial job at a local gym and hopes to work for the Border Patrol someday. “I try to focus on myself, trying to graduate and have good grades. That’s the one reason I help, to stay focused and help the community so I won’t get in trouble.”

But for some older residents, like Herrera, staying no longer seems like an option. Oak View is very different from when his father arrived in the 1950s to work as a bracero. Now his parents are dead. Jobs have dried up. Traffic is awful. Even with two roommates, he’s facing a choice between paying his share of the $1,600 rent and keeping food on the table.

And Puebla, the land of his forebears, beckons.

“Now with smartphones, you can get on YouTube to see everything in your country. I miss my country,” he said.

Neymar on reuniting with Messi: next year we have to do it
Scott Micromini: I hope Manchester United will win Leipzig and away
Lampard on whether Giroud will start in the Premier League: we'll See. Forward scored 4 goals for Sevilla
Lucescu after 0:3 with Juve: Dynamo is learning, getting experience and should go to the eurovesna
You can't be half-pregnant and half-make the playoffs. Tuchel on PSG's chances in the Champions League
Barcelona first ever Champions League penalty kick in 5 consecutive rounds
Almost pregnant doesn't mean pregnant. This is Tuchel's metaphor about PSG's chances for the Champions League play-offs: we explain their alignment with Manchester United and RB
Source https://www.latimes.com/california/story/2020-10-28/huntington-beach-latino-enclave-fights-honor-heritage