Abbreviated Pundit Roundup: COVID-19 is driving the election, and Donald Trump will pay the piper 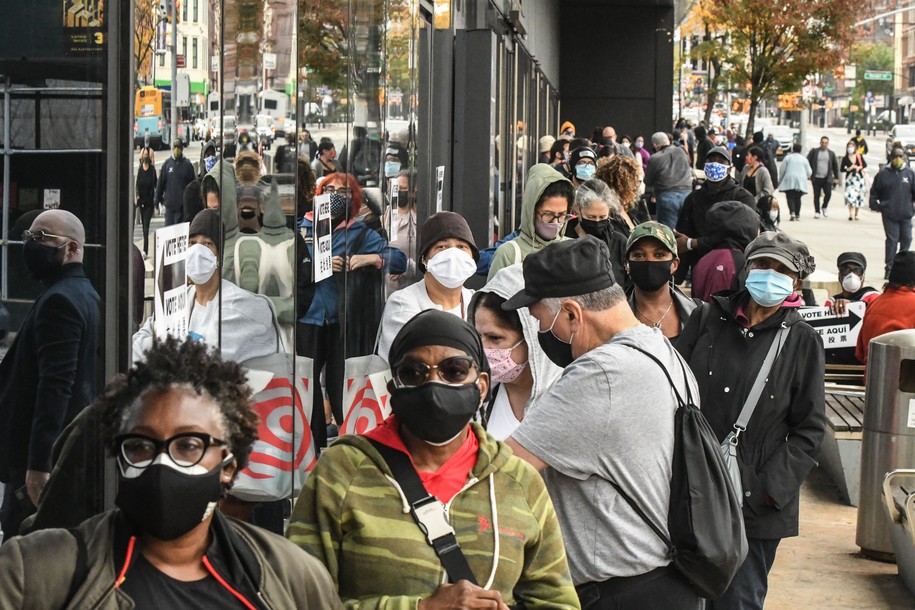 NYS early vote, brought to you by the coronavirus. So far across the country, 80 million people have already voted.

The story of the election is right here. You can say or write anything else, but it’s this.

NEW: Coronavirus cases are surging in every competitive state before Election Day, offering irrefutable evidence against President Trump’s closing argument that the pandemic is nearly over and restrictions are no longer necessary.https://t.co/VHcm2sUt2z

A presidential order would almost certainly face a legal challenge. But if elected, Joseph R. Biden Jr. would have other levers at his disposal to make mask wearing a cultural norm.

Over the past week, a string of prominent public health experts — notably Dr. Anthony S. Fauci, the government’s top infectious disease specialist, and Dr. Scott Gottlieb, a former commissioner of the Food and Drug Administration under President Trump — have said it is time to seriously consider a national mandate to curb the spread of the virus.

Let’s never normalize how bizarre it is that we are all having to expend an inordinate amount of time making sure that our votes get counted cuz there is a whole side in this country that knows they can’t win when lots of people vote. It ain’t normal or right.

The president’s inability to capture a majority of support sheds light on his extraordinary efforts to suppress the vote.

Never before in modern presidential politics has a candidate been so reliant on wide-scale efforts to depress the vote as Trump.

“What we have seen this year which is completely unprecedented … is a concerted national Republican effort across the country in every one of the states that has had a legal battle to make it harder for citizens to vote,” said Trevor Potter, a former chair of the Federal Election Commission who served as general counsel to Republican John McCain’s two presidential campaigns. “There just has been this unrelenting Republican attack on making it easier to vote.”

If I were the President, I might say things like: "One day, when I'm retired, I would like to come back here and just visit, because this is a wonderful place, instead of campaigning. But first we have work to do."

America Is About to Choose How Bad the Pandemic Will Get

If Donald Trump is reelected, he will continue to downplay the threat of the coronavirus, and more Americans will fall ill.

In the 2020 election, on top of every routine test of character and capability, the candidates must answer the challenge the coronavirus has brought to this country. Trump’s response has been so lax as to effectively cede the country to a virus whose spread is controllable. He has,&nbsp;by his own admission, repeatedly downplayed the threat after he became aware of how dangerous the new coronavirus could be. He caught the virus himself and seems to have learned nothing from the encounter.

I don't want to be too snarky but Trump needs to close a big polling deficit and this is the message on a day with 80k new COVID cases and a 940 point decline in the Dow. https://t.co/aJ4kPawfmb

The president isn’t a throwback to old-school masculinity. He’s a he-man specifically engineered for our image-based, sensation-saturated times.

Of the grunt ethic, Pyle wrote, “We are all men of new professions, out in some strange night caring for each other.” This service-oriented prototype of manhood — tending to the needs of others, providing protective support, spurning the spotlight — was essentially a maternal masculinity, all the purported qualities of motherhood, recoded for the Y chromosome.

If anyone in the race is channeling that precept, it’s Mr. Biden, who, a day after federal officers tear-gassed peaceful protesters to make way for Mr. Trump’s photo-op outside St. John’s Church,&nbsp;called the presidency&nbsp;“a duty of care — to all of us.” Ernie Pyle would have worn a mask, because it comported with the masculine ethos of his era: shielding others from harm, being enlisted in the country’s defense.

Mr. Trump could not be more at odds with that ethic. His is a Potemkin patriarchy, the he-man re-engineered for an image-based, sensation-saturated and very modern entertainment economy.

Don’t miss either one of these clips.

David Perdue lined his own pockets – trading medical stocks and dumping casino shares – while he lied to us about the threat of a virus that's now killed over 220,000 Americans.

At last night's debate, millions saw that Perdue had no answers when I called him out on his record of blatant corruption, widespread disease, and economic devastation.

Shame on you, Senator.

A room, a bar and a classroom: how the coronavirus is spread through the air

The risk of contagion is highest in indoor spaces but can be reduced by applying all available measures to combat infection via aerosols. Here is an overview of the likelihood of infection in three everyday scenarios, based on the safety measures used and the length of exposure

The coronavirus is spread through the air, especially in indoor spaces. While it is not as infectious as measles, scientists now openly acknowledge the role played by the transmission of aerosols – tiny contagious particles exhaled by an infected person that remain suspended in the air of an indoor environment. How does the transmission work? And, more importantly,&nbsp;how can we stop it?

A great dataviz piece, above. But the article is not without controversy:

To win, Trump needs to win states where he hasn’t led polling averages in months

As&nbsp;we’ve noted, Trump benefited in 2016 from undecided voters shifting in his direction. That was possible because there were a lot of undecided voters — both Trump and Hillary Clinton had the support of less than half of voters. This year, such undecided voters are less common, and candidates polling above 50 percent are more common. So in many states, it’s not just that Trump hasn’t accrued enough support, it’s that his ability to get a plurality of the vote depends not on people making up their minds (undecided voters) but on people&nbsp;changing&nbsp;their minds about supporting former vice president Joe Biden.

Battleground polling of all voters - white, Black, Latino found the child separation issue badly hurts Trump. Because it was immoral and unethical. https://t.co/MB6wZitu8B

Why is Trump trailing? New polling shows it’s his slide among Whites.

After Donald Trump shattered the “blue wall” states in 2016, reporters spent years venturing into rural and small-town Rust Belt hinterlands to examine the Real American White Voter’s seemingly unshakable attachment to Trump. His divination of their true values and aspirations has long since been treated as a quasi-mystical phenomenon.

So it’s a remarkable turnabout that President Trump is now well behind in his race for reelection in large part because he’s losing ground among Whites of all kinds, a particularly pronounced trend in that very same region.

Fati became socio of Barca, but will not be able to vote in the next election
Jose Mourinho: some Tottenham players coming to visit LASK, Ludogorets, think they don't belong there
Pioli on 4:2 with Celtic: Milan did not lose their head at 0:2 and continued to play as a team
Messi will be at PSG next year. RMC Sport journalist on Barca forward
Suarez passed a negative test for coronavirus and will return to the General group of Atletico tomorrow
Chelsea are ready to sell Ruediger and Tomori in the winter. The German was Interested in Barcelona
Çalhanoğlu for 7 years has scored 18 goals from free-kicks. Only Messi (36) has more players in the top 5 European leagues
Source https://www.dailykos.com/stories/2020/10/30/1990735/-Abbreviated-Pundit-Roundup-COVID-19-is-driving-the-election-and-Donald-Trump-will-pay-the-piper

CNN Exclusive: Biden says he will ask Americans to wear masks for the first 100 days he's in office

Warner Bros. Will Release Its Films on HBO Max and in Theaters Simultaneously. The Decision May Change Moviegoing Forever

Bayless launches YouTube cooking series funding staff salaries: How Chicago restaurants are adapting to draw you back in

The Heartbeat of ‘Small Axe’

Federal watchdog: 'substantial likelihood of wrongdoing' at US Agency for Global Media

Tennessee inmate’s execution put on hold due to COVID-19

‘Let Them All Talk’ Review: Steven Soderbergh Turns a Transatlantic Cruise With Meryl Streep and Friends Into an Actors’ Joyride

‘Superstore’ to End After Season 6 on NBC

Super-Manager Wassim ‘Sal’ Slaiby on Helming the Careers of The Weeknd, Doja Cat, Brandy and More

Warner Bros. to Stream All 2021 Movies

DOJ alleges Facebook discriminated against US workers in new lawsuit

Women and BIPOC Continue to Trail in TV Representation, According to Nielsen Study