Voters in Alabama are casting absentee ballots in record numbers after pandemic rules made it easier to do so.

As early voting proves popular -- with many lining up on Saturdays despite the virus -- some are asking why the state doesn't allow it every year.

More than 145,000 absentee votes have already been cast, either by mail or in-person voting, according to Alabama Secretary of State John Merrill. He said that number is expected to rise.

The state’s previous record for absentee votes was about 89,000. For the Nov. 3 election, Merrill said another 70,000 absentee ballots remain outstanding. 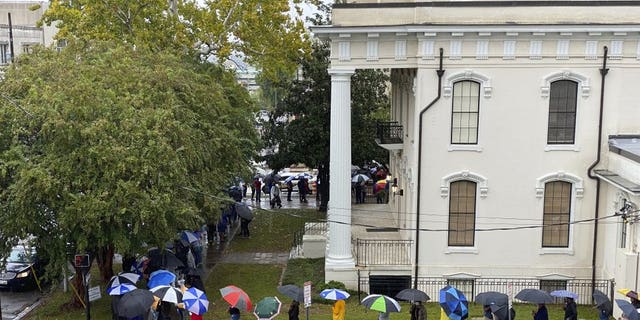 People wait in the rain to vote in Montgomery, Ala., on Saturday, Oct. 24, 2020. Alabama Secretary of State John Merrill said a record number of absentee ballots have already been cast this year in the election. Some counties allowed Saturday voting for the first time. (AP Photo/Kim Chandler)

England said he believes the issue cuts across party lines, and that people of all political leanings appreciate the opportunity to vote outside of 12 hours on Election Day.

Alabama does not technically have early voting, but people can cast absentee ballots by mail or in-person at local election offices. Normally, to vote absentee, people must swear that they are out-of-town, ill, or working during polling hours. Merrill has said this year people can vote by absentee ballot if they are concerned about the risk of COVID-19 at the polls.

Election officials in more than a dozen of Alabama’s 67 counties have offered Saturday in-person absentee voting to handle the anticipated flood of people.

On a rainy Saturday in Montgomery, people waited in line for more than three hours for an opportunity to vote early in the November election. News outlets showed similar lines in Birmingham and Mobile.

Aviance Turnbull, 40, stood with an umbrella in hand to cast her vote for Democrat Joe Biden.

Turnboll is an advanced placement science teacher at a Montgomery magnet school and mother of three teenagers. Her work and home schedule sometimes makes it difficult to get to the polls on Election Day, so Saturday voting is much more convenient, she said.

“I say make this the norm. Make it where that we are not making it so difficult with all these obstacles in the way for voting,” she said.

Wearing a black T-shirt with the word VOTE on it, Jacqueline Smiley, 36, was turned away from voting Saturday because local election officials closed the line at noon. Smiley said she planned to come back Monday, but she would also like to see the state allow early voting every year.

“It would be beneficial to anyone who has to work or just can’t get away,” she said.

Democrats have made a push to get people to the polls early. “Every day is Election Day,” the state Democratic Party wrote on social media in posts encouraging people to make a plan for voting.

England said he expects legislation to be introduced in the next session to allow early voting every year, or at least allow people to vote absentee without an excuse.

Such a change would have to be approved by the GOP-dominated Alabama Legislature. A bill to allow people to absentee vote without an excuse or explanation passed the state Senate in 2017 but did not get a vote in the House of Representatives. Merrill said he expects the issue to be considered in the 2021 legislation session.

Asked if Republican Gov. Kay Ivey would support a change to allow early voting or no-excuse absentee voting, spokeswoman Gina Maiola replied that the governor “is confident in the current process in place and believes that every person has ample opportunity to cast their vote in Alabama, even as we are amidst a pandemic.”

Merrill said the decision to offer Saturday voting is up to local election officials.

“I don’t know why it hasn’t happened before,” Merrill said.

Bale doesn't need to prove anything. His presence inspires the Tottenham players. Davis on the midfielder
Pochettino and Raul can replace Zidane at Real Madrid. The club does not want to dismiss the Frenchman yet
Stefano Pioli: Milan need to take the Celtic game seriously. They always play well
Atalanta captain Gomez did not follow Gasperini's instructions in the match against Midtjylland. He was replaced at half-time
We have a big battle ahead of us. Conor and Sergio Ramos agreed to a fight
Tuchel on the match with Manchester United: Victory is mandatory. Coming to England for her is a big challenge
Jimenez will miss Atletico's games with Real Madrid and Salzburg due to a hip injury
Source https://www.foxnews.com/politics/absentee-voting-hits-record-level-in-alabama

This winter, the Vox Book Club is reading about lesbian necromancers in space

Can ‘Wonder Woman 1984’ Lasso a Hit for the International Box Office?

Who Has Trump Pardoned So Far?

Illinois reports 238 COVID-19 deaths, the most in a single day since the pandemic began

GOP chairman: Defense bill to include renaming Confederate bases, but not Section 230 repeal

Like Everyone Else, Mackenzie Davis and Charlize Theron Discuss Happiest Season

Visa to launch credit card that offers bitcoin as a reward

North Lawndale school consolidation proposal that split the neighborhood is now on hold: ‘We took a stand as a community’

CNN has been ‘overwhelmingly biased’ against Trump: Joe Concha

New rule cracks down on emotional support animals on planes

Black women don't get much startup funding. These founders are trying to change that

Is ‘Ammonite’ Based on a True Story?

Arizona’s Kelly to be sworn into Senate, narrowing GOP edge

Coronavirus in Illinois updates: 9,757 new confirmed and probable COVID-19 cases and 238 additional deaths reported, the highest daily death toll since the start of the pandemic

See the ‘Jersey Shore’ cast then and now

'I have lot of anger which is needed, don't have temper': Salman Khan

To See and Be Seen: These Dancers Make Disability Visible

Meghan Markle opened up about her painful miscarriage for this reason, says pal

Review: A brilliant turn from Aubrey Plaza in ‘Black Bear’

Phoenix cop accused of sexually assaulting 3 women while on duty

George Clooney reveals hope for America's future after its 'great deal' of failures: 'You can't give up'

Waiting for passengers, American puts Boeing Max in the air

P.P.P. Loan Data Shows How a Sliver of Borrowers Got Much of the Help

No American Lives Should Be Lost to Defend Taiwan

NFL Superstar Bobby Wagner on Creating a Vision Off the Field

The seven most important relationships Biden will have on Capitol Hill

Out $395 in bitcoin scam, Chesterton woman reports man’s threat to kill her: police

Mark Kelly to Be Sworn In, Narrowing G.O.P.’s Senate Majority

Facebook’s Oversight Board Has Announced Its First Six Cases

Switzerland cuts new COVID-19 infections in half without national lockdown

Savannah Chrisley is getting her family phone chargers for Christmas

What You Need to Know About COVID-19 and Flu

Who is Ben Shapiro's Wife? Everything We Know About Mor Shapiro