Award-winning actor Judd Hirsch, a Bronx-born army vet with a physics degree, has put his charming mountaintop compound on the market for $4.49 million.

He bought the initial parcel of land of 44 acres for $56,000 in 1983, and built the 5,600-square-foot home from the ground up — 2,271 feet above sea level, with views of three mountain ranges: the Catskills, Berkshires and Shawangunks.

Hirsch made his name as beloved New York City taxi driver Alex in the sitcom “Taxi.” He’s also been in films including “Running on Empty,” “Independence Day,” “A Beautiful Mind” and many other television shows, like “Dear John.”

Hirsch and his wife Kathryn love the area and aren’t leaving, Waring says, but they are looking to downsize. 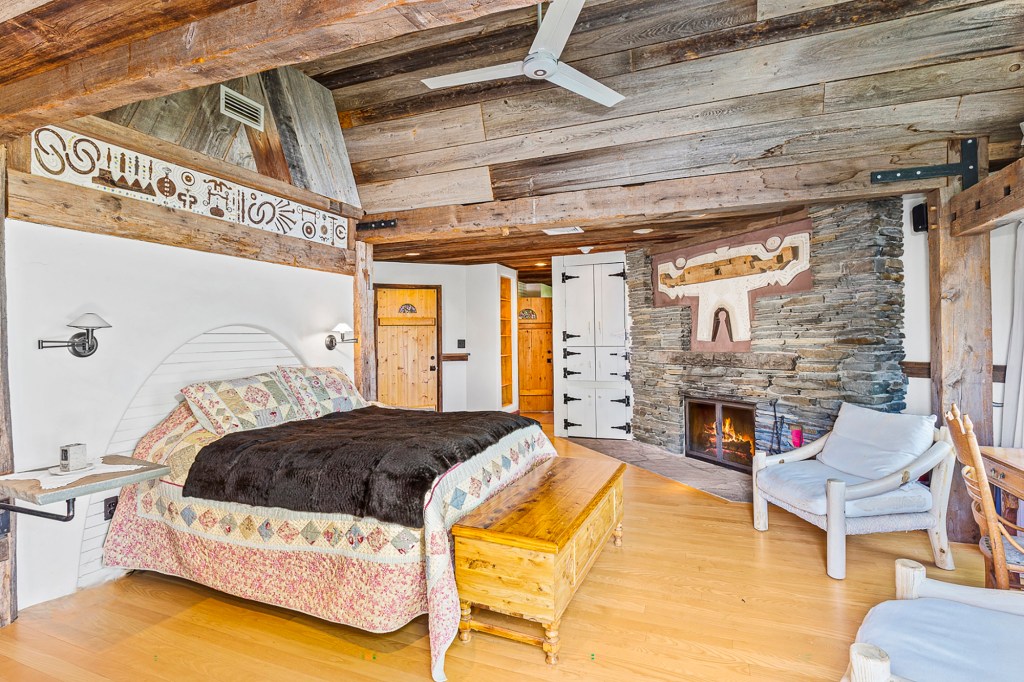 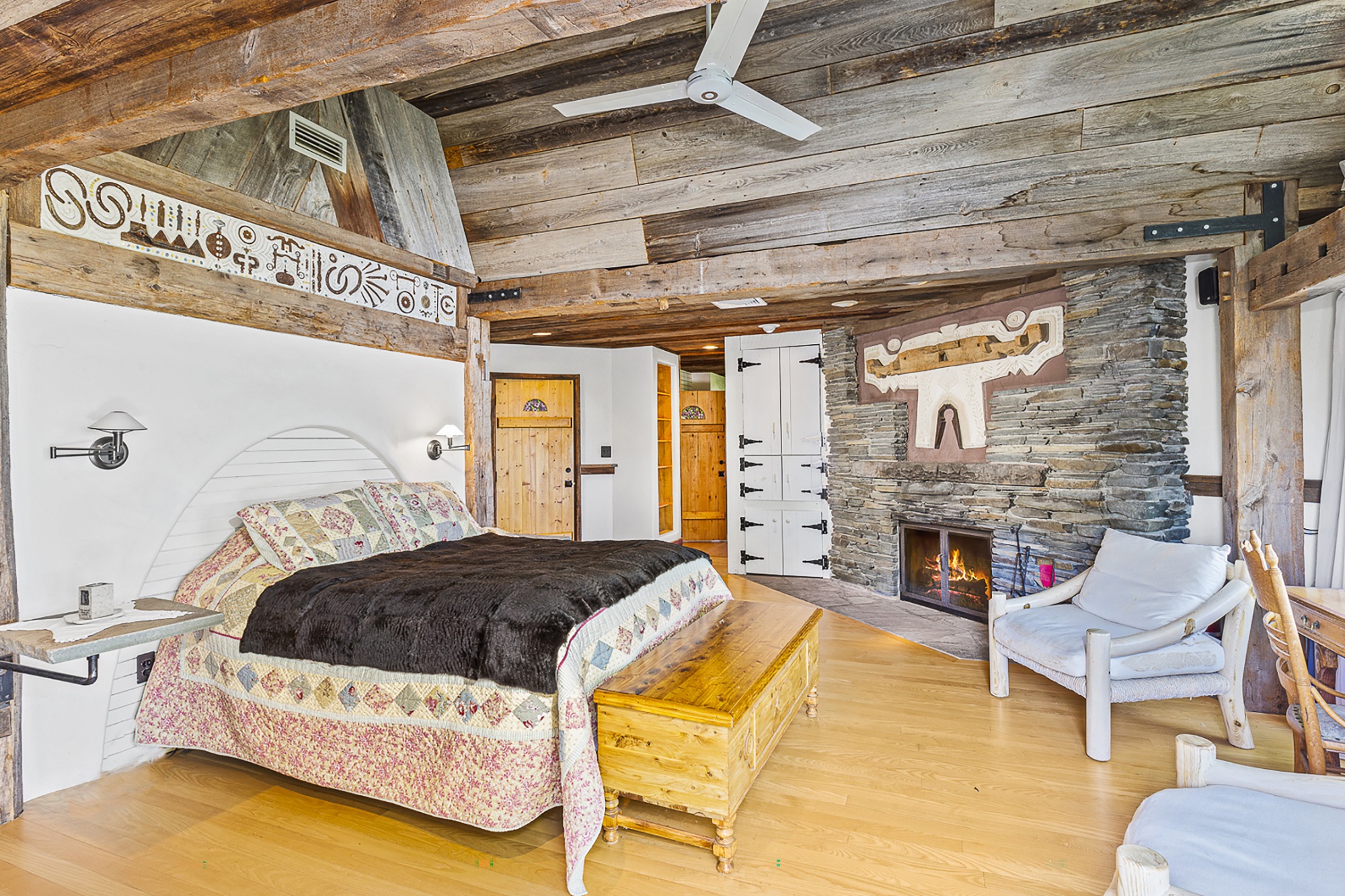 One of the home's six bedrooms. 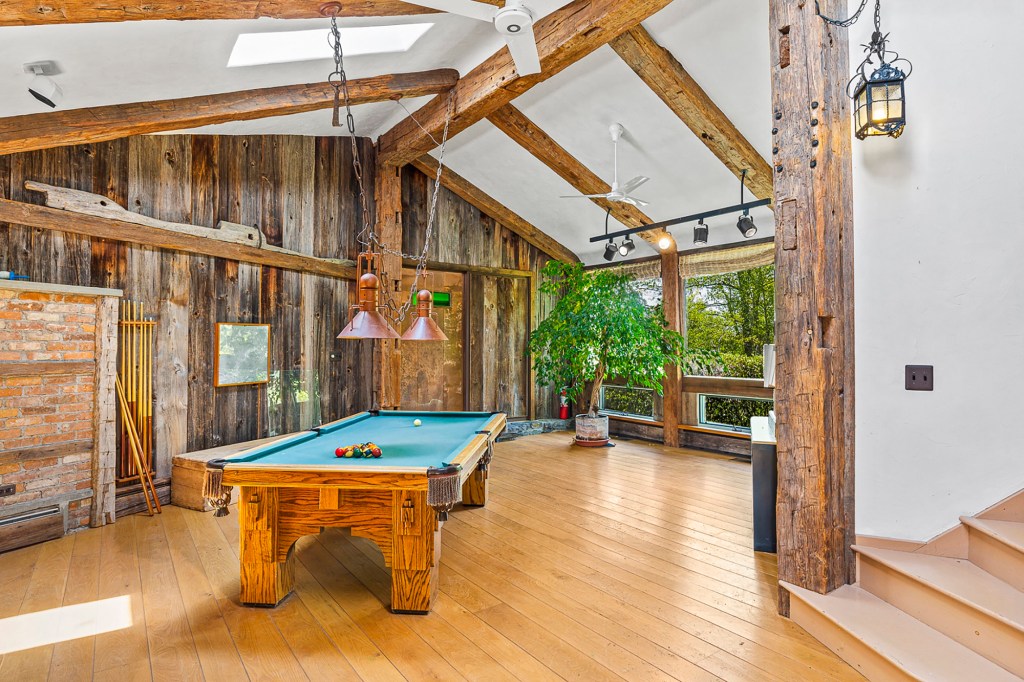 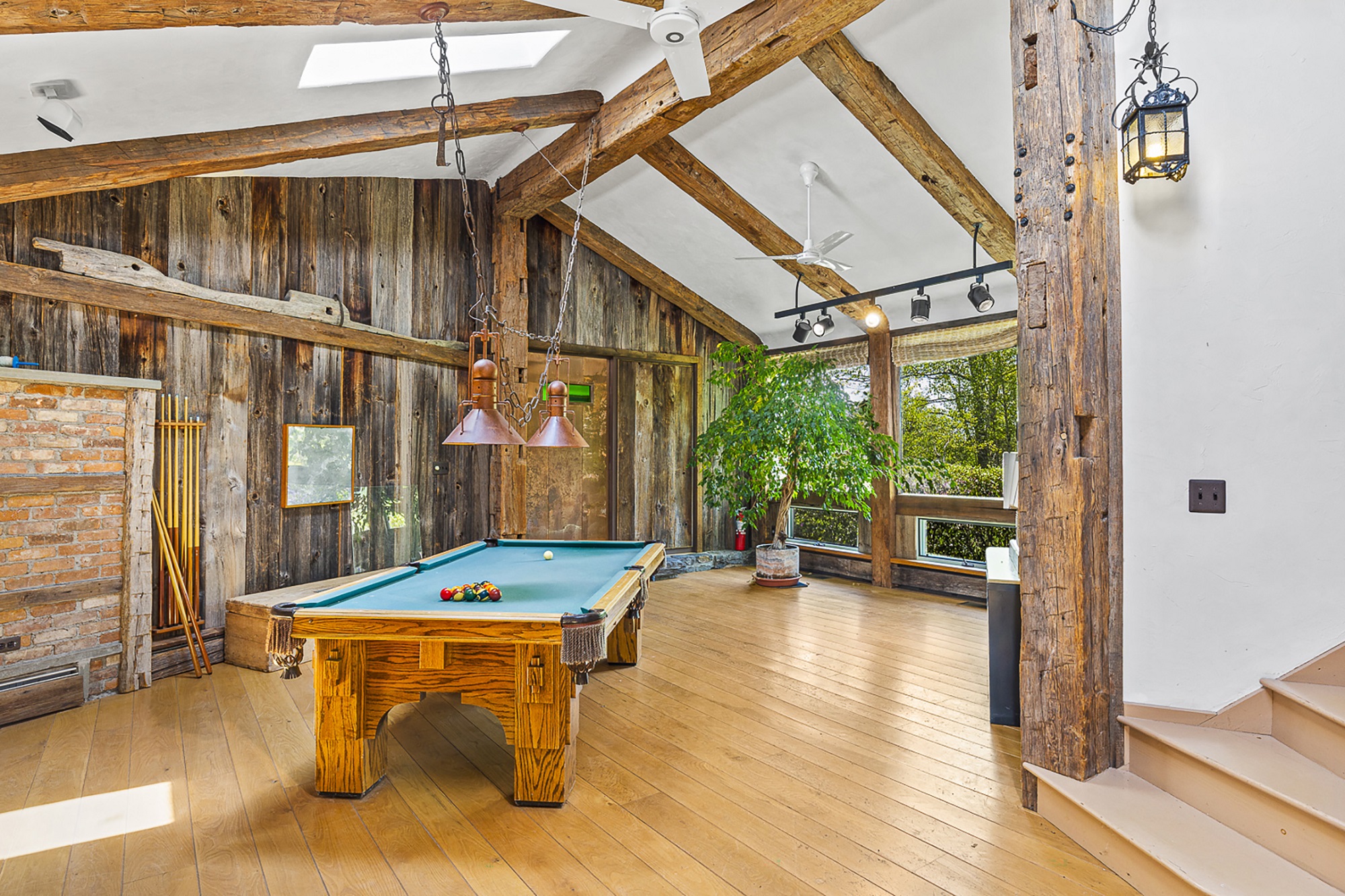 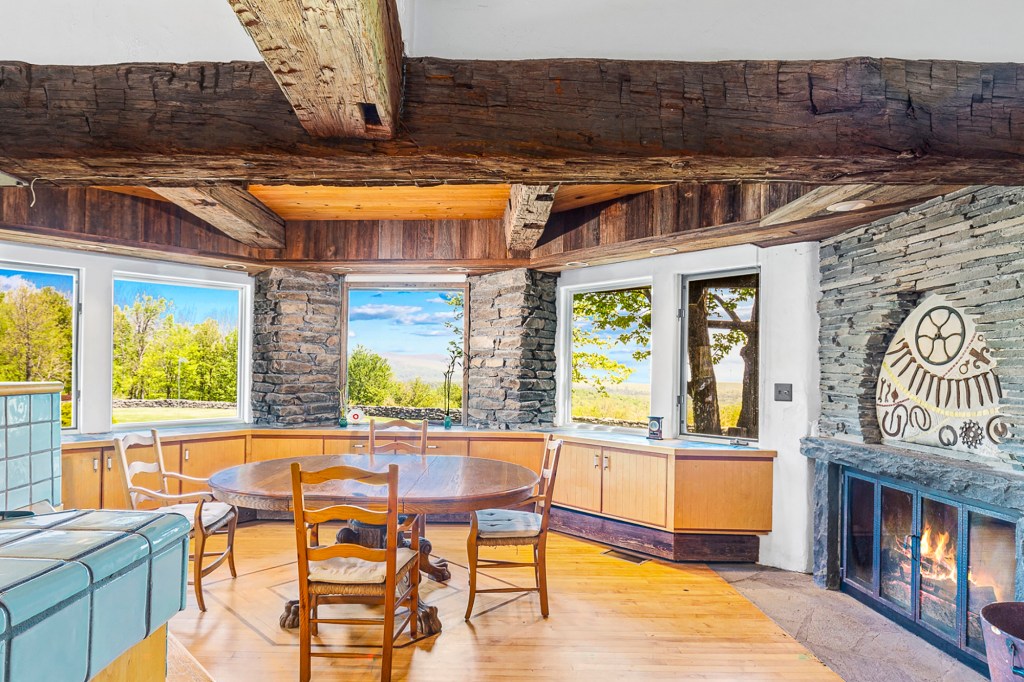 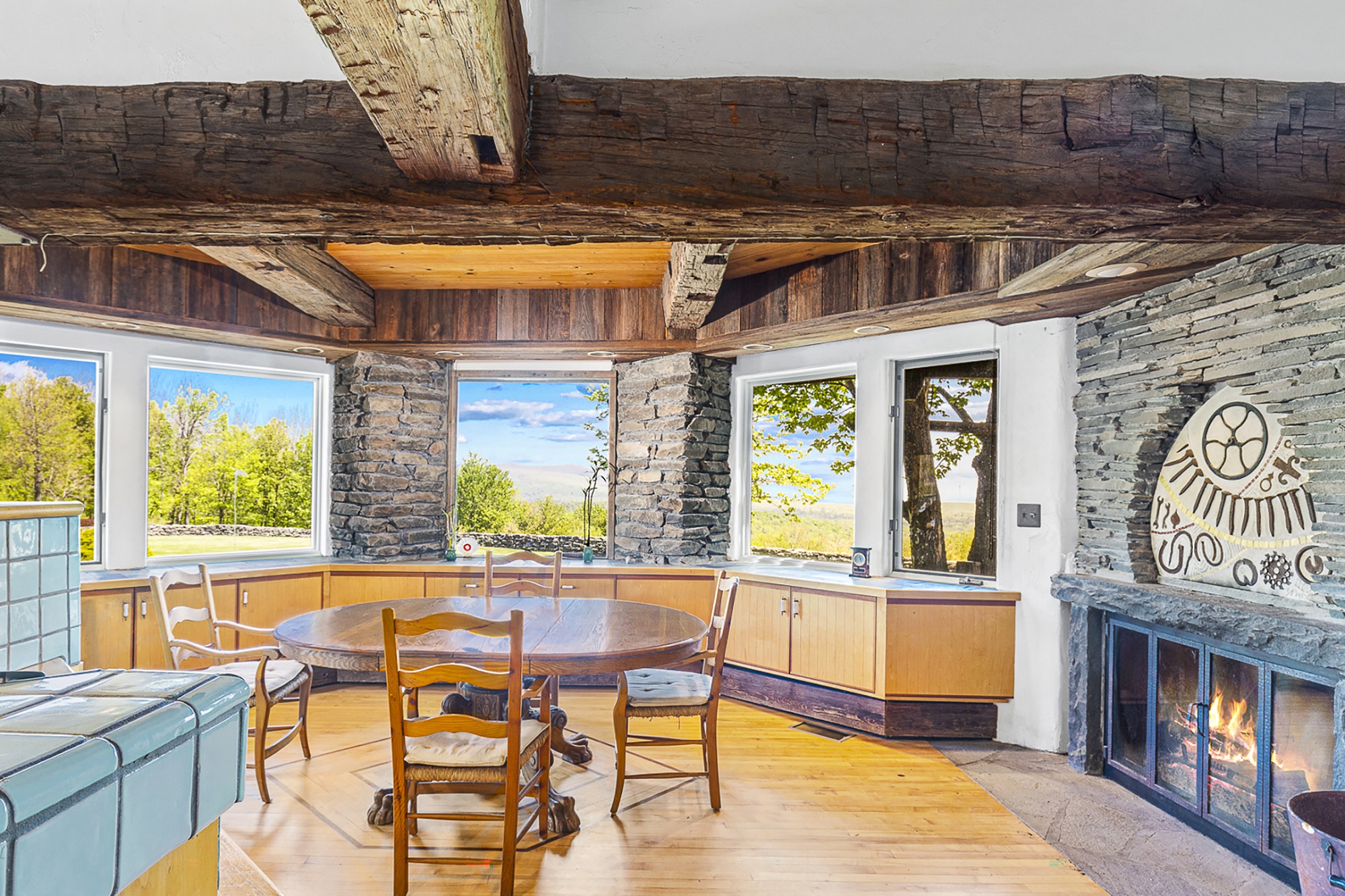 The compound's dining area has a fireplace.

The home, built in 1985, features a great room with cathedral ceilings and 200-year-old barn beams and many of the rooms have similar beams collected from five disassembled barns.

Along with the main house, which comes with an indoor pool, there’s a pool house with a stone fireplace, kitchen, gym, hot tub, two full baths and an outdoor pavilion with a stone barbeque grill. 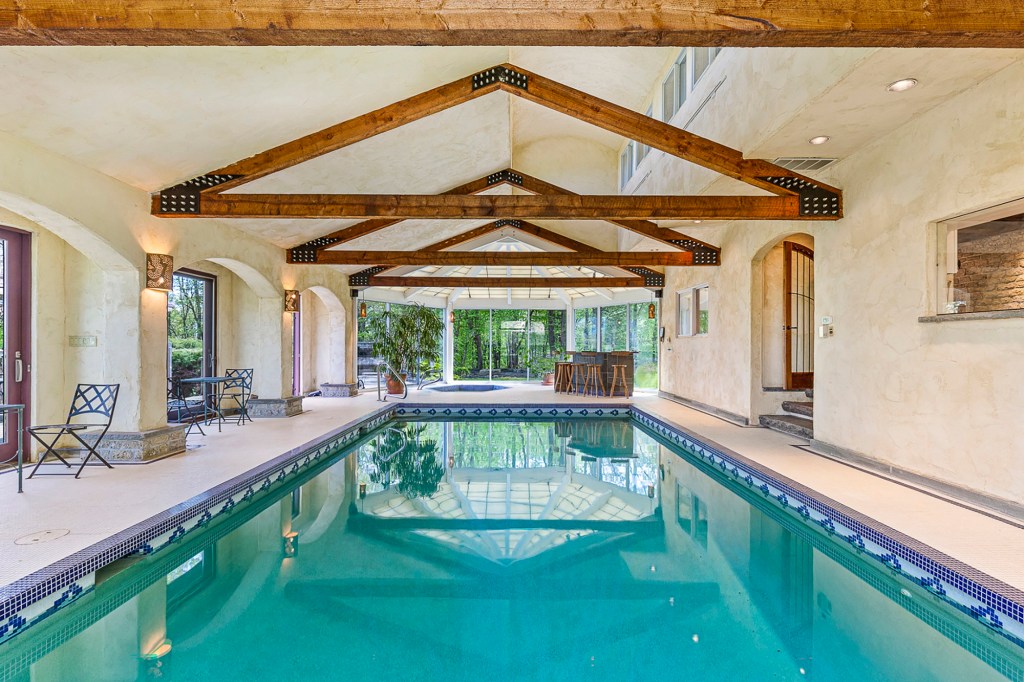 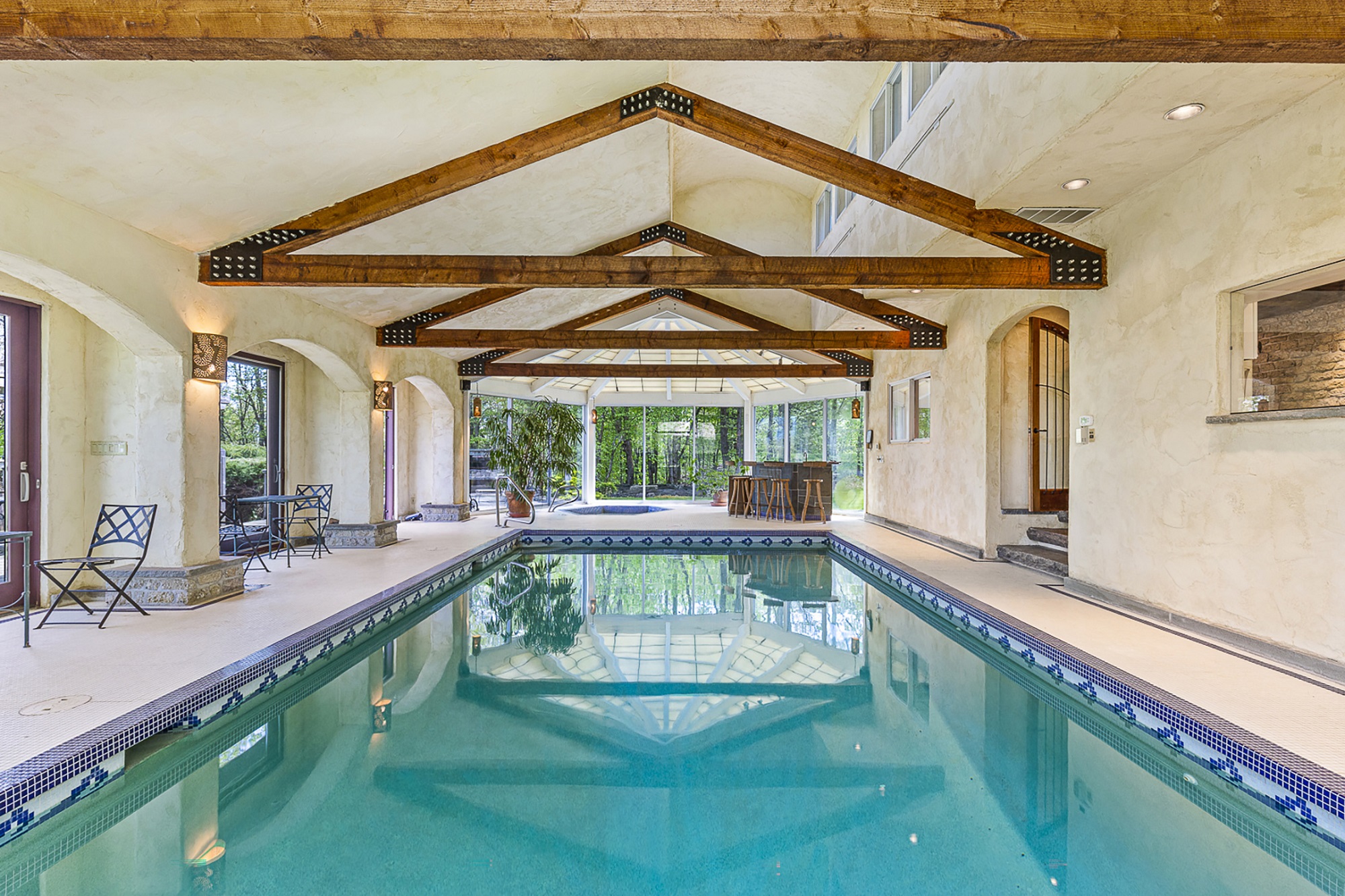 The sprawling Napanoch pad has an indoor pool. 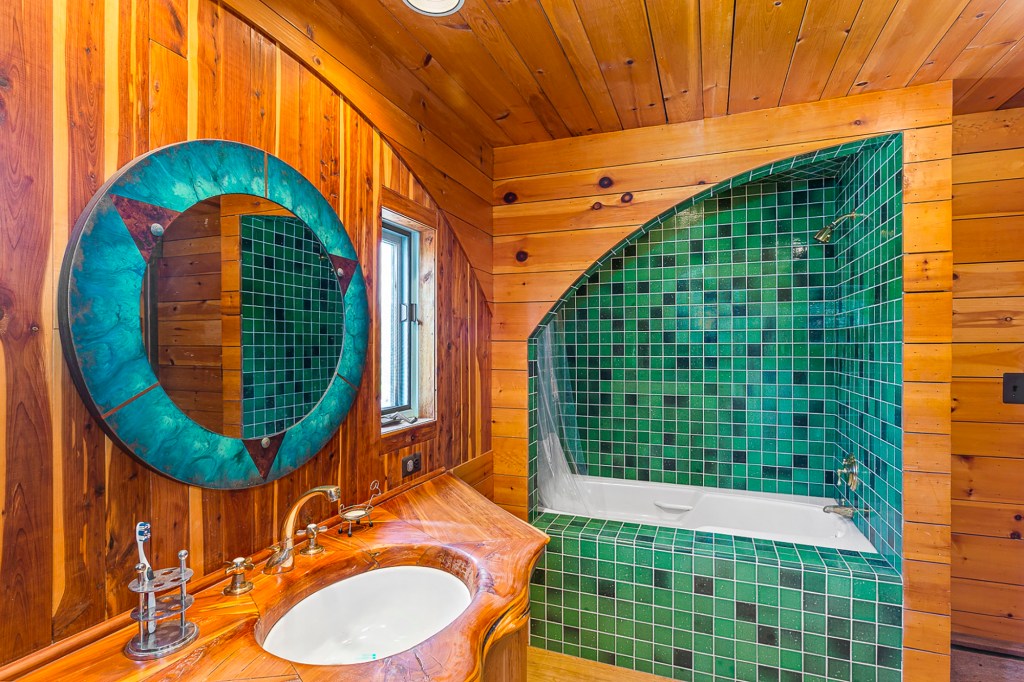 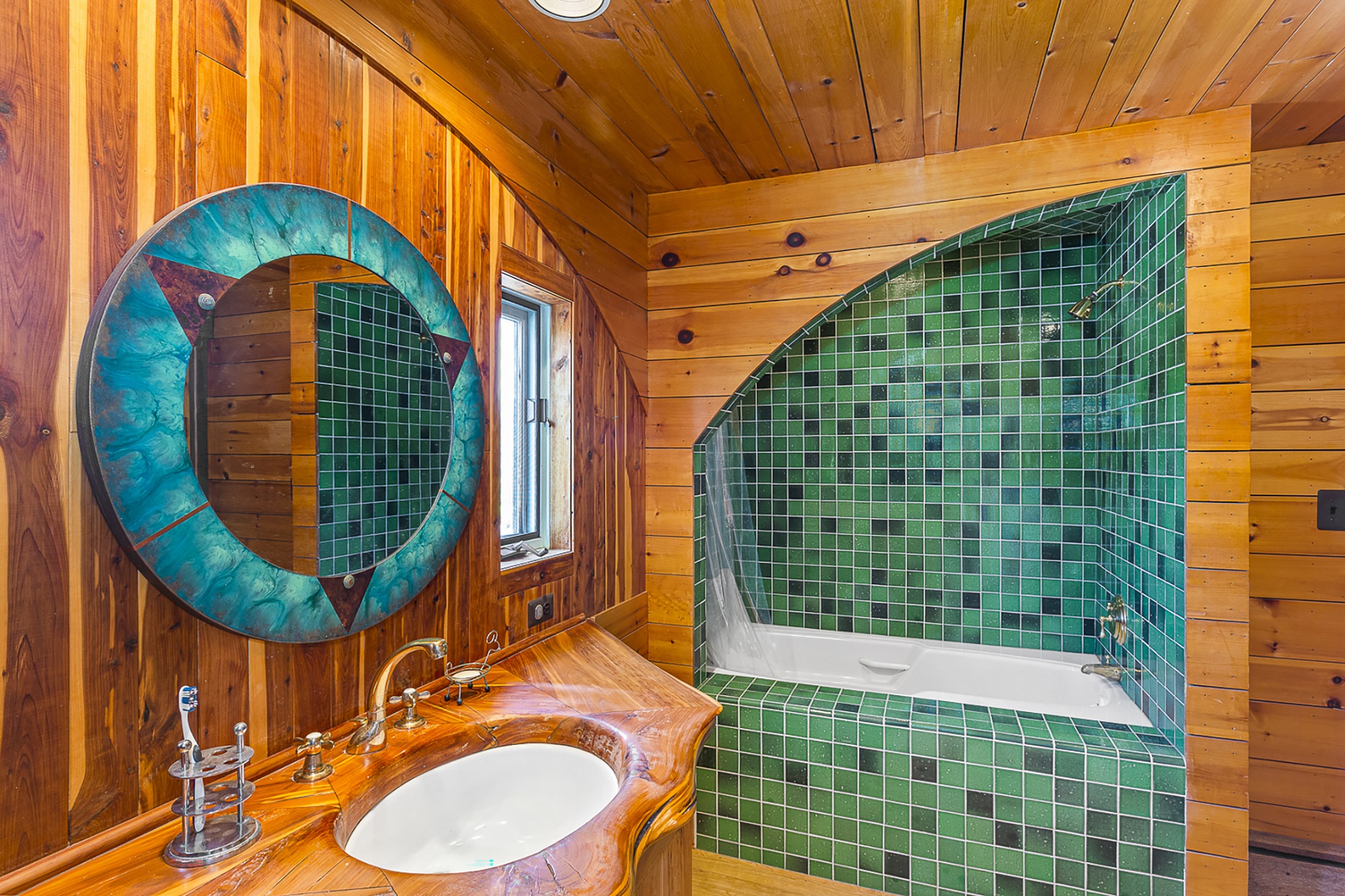 There are 4½ bathrooms in the main house. 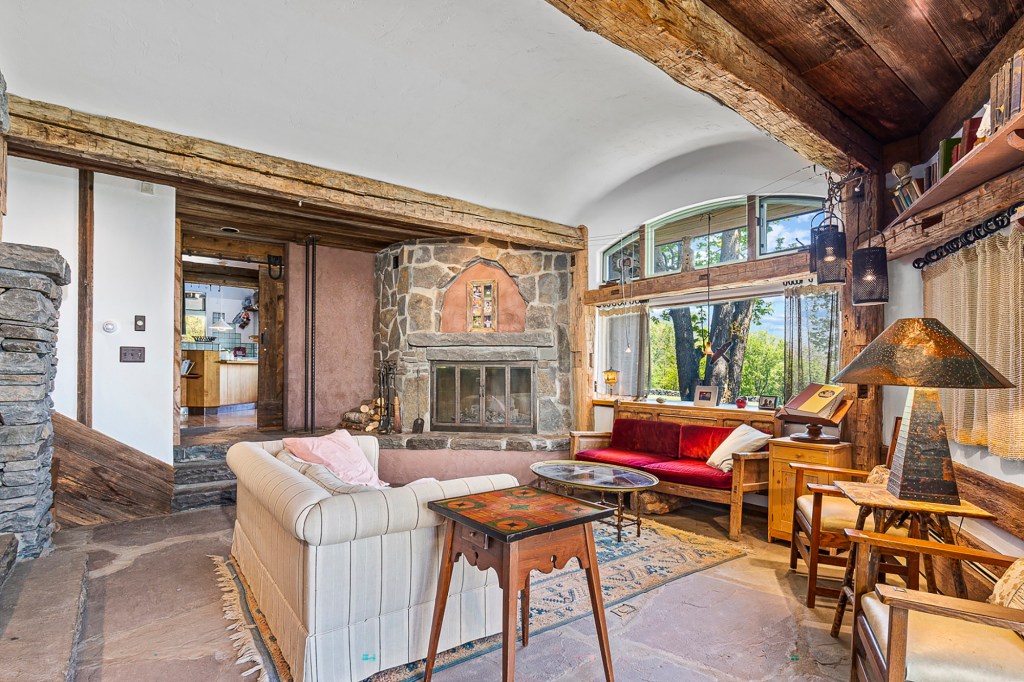 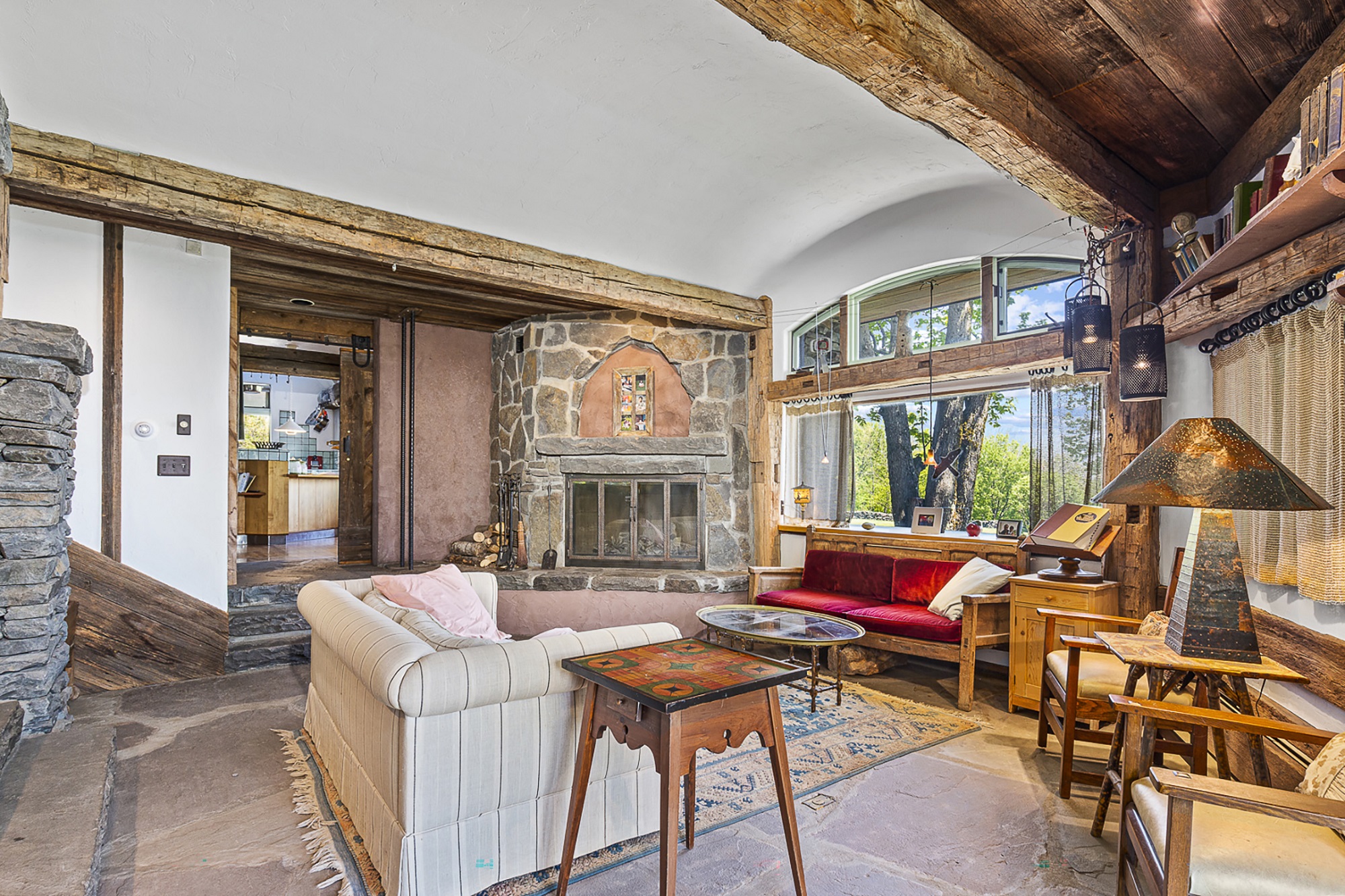 The main house is a generous 5,600 square feet.

In addition, there’s a  studio with a lounge by a spring-fed pond filled with bass, catfish and trout and an irrigation pump for landscape watering.

One detached two-car garage comes with a workshop and apartment above it and another three-car garage features a large one-bedroom apartment.

The compound includes a solar farm-to-power field, 20 geothermal wells for heating the main residence and an indoor heated pool.

Burnley extended the contract with Coach Dyche until 2025
Barcelona is close to extending the contract with Araujo for 5 seasons
The Barca Board of Directors approved the closing of the financial year with a loss of 481 million euros. Budget for the season-2021/22 - 765 million
Mendes is discussing Fati's new contract with Barca. The club sees him as a strategically important player for years to come
The author of poker for Ajax Aller-the player of the week in the Champions League
Dad, this is for you. The father of the defender of Man City Ake died a few minutes after his son's debut goal in the Champions League
Adam Traore's goal from Sheriff against Shakhtar is the best goal of the week in the Champions League

One of America's oldest cities has had only White men as mayors. In November, that changes

Abode Cam 2 review: A $35 camera that punches above its weight

Jim Gianopulos’ Paramount Ouster Is Another Sign of the Streaming Times

CMT ‘Artists of the Year’ Show Taps Luke Combs, Gabby Barrett and Others for Live Return

Tune in Whenever You Want: How TV Marketing Has Changed in the On-Demand Era

Zoë Kravitz and Channing Tatum are now sharing a stylist

What Time Will ‘The Morning Show’ Season 2 Premiere on Apple TV+?

Newt Gingrich: The rare Republican opportunity to make Democrats own the Socialist brand

The Case for a Smaller Reconciliation Bill

Biden addresses the nation on economy, expected to argue against going back to pre-pandemic policies

'Incredibly dangerous': Trump is trying to get Big Lie promoters chosen to run the 2024 election

Debbie Allen Reflects on Storied Career, Being the First Black Female Recipient of the Governors Award

Ken Jennings and Mayim Bialik will host 'Jeopardy!' for the rest of the year

U.S. Border Agents Found A Toddler And A Baby Abandoned Along The Rio Grande

No. 13 UCLA looks to avoid misstep against Fresno State

EXPLAINER: What are current COVID-19 guidelines for schools?

US stocks fall as technology companies lead a broad slide

Fiance Of Missing Woman Identified As Person Of Interest

If You Want to Scale, Give the People You Hire Freedom to Succeed

White House Official: We Offered A Call With Nicki Minaj Over Vaccine Safety

Three Iranian dissidents to be honored by PEN America

5 Penny Stocks To Buy According To Insiders In September

Boilermakers hoping to be spoilers against Fighting Irish

Get Focused in 60 Minutes Flat With This Nootropic Stack

'Jeopardy!' goes with Mayim Bialik, Ken Jennings as hosts for the rest of the year