A physician, two nurses, a professional athlete, a drug dealer and a lawyer who had nodded off in court. Teenagers, specifically a 14- and a 15-year-old. And a 7-year-old who got into a stash in her mother's purse.

These are some of the types of people Dr. Christopher Colwell, the chief of emergency medicine at Zuckerberg San Francisco General Hospital, has recently seen in the emergency room for medical issues related to fentanyl use and overdoses.

"That's just in the last couple weeks," Colwell said. "It’s really remarkable because it runs the entire spectrum. This affects all walks of life, all folks. It’s hard to overstate how impactful it can be to anyone. It doesn’t seem to care about race or background or gender — or anything."

Colwell said on average about 10 to 15 people who've taken fentanyl are treated in the San Francisco General emergency room a day, sometimes more. And that's at just one hospital in the city.

Naloxone (Narcan) is a medicine used treat a fentanyl overdose and prevent death, and when administered, patients actively vomit and sweat.

"Our most immediate threat right now is the opioid epidemic and the trauma we are seeing. We are seeing increases I haven’t seen in my career around dependency and overdoses, mostly involving fentanyl. We always had problems with opioids, specifically heroin, but fentanyl has changed the whole landscape of drugs." 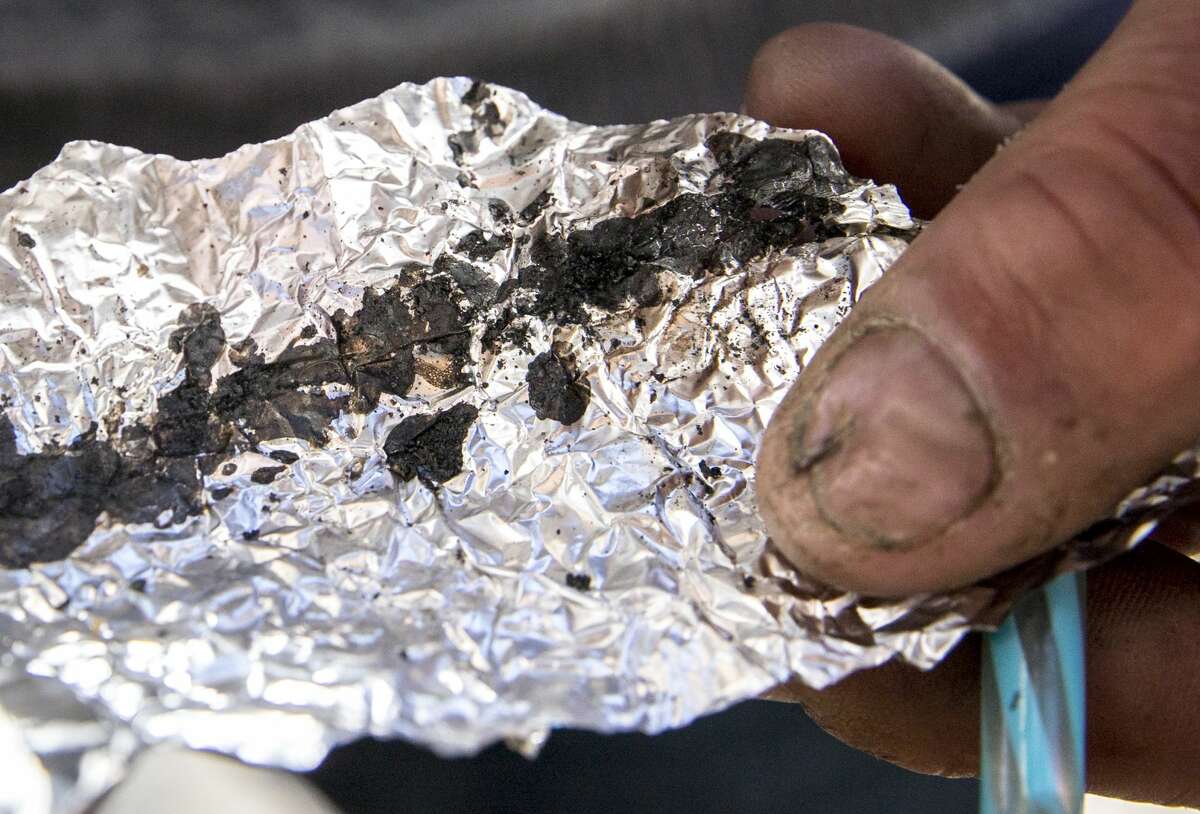 In this file photo, Roger Boyd, 35, holds a piece of foil containing fentanyl while spending time on McAllister Street in the Tenderloin district of San Francisco on June 21, 2019.

Fentanyl is a powerful synthetic opioid that's 50 to 100 times more powerful than morphine. Like all opioids it's a respiratory depressant and can impact the user's ability to breathe.

It was initially created in the 1960s to manage pain after surgery, and its clinical use expanded in the 1990s with the introduction of the extended release patch for chronic pain, typically advanced cancer pain.

"I give fentanyl in the ER every day for people in trauma," said Colwell. "It’s very quick. Morphine reaches peak effect is 20 minutes. Fentanyl is immediate."

More recently, fentanyl is being illicitly made in labs and usually either sold under its own name as powders or tablets or mixed with a wide range of drugs such as heroin, cocaine, methamphetamine, and MDMA. It's also made into counterfeit pills that look like other prescription opioids.

Fentanyl wasn't a problem for San Francisco a decade ago, but since about 2018, illegally produced fentanyl has flooded the recreational drug market, intensified the peril of addiction and amplified overdoses. Colwell said the majority of people who land in the ER have ingested it unintentionally, either using a drug that they didn't realize was laced with fentanyl, or that they thought was something else entirely but was actually fentanyl.

"Even our most savvy drug users know that fentanyl is something to be very careful with," he said. "Of the ones that present to the emergency department, I would say about two-thirds say they did not realize they were taking it. But there are people who also take it knowingly and they just don’t know how potent it is. We need to be aware of how dangerous this is and how common it is."

Colwell said he treated a drug dealer who explained to him that he mixes the heroin he sells with fentanyl to make a larger profit. The dealer explained that customers can't afford pure heroin, but if he dilutes it with other substances, then customers aren't satisfied with their highs and stop buying.

"The dealer told me, 'My out is I can put a little fentanyl in there. I dilute it, mix it and they still get that intense high,'" Colwell said.

But while the majority of fentanyl cases that land in the ER may be due to accidental use, Dr. Phillip Coffin, director of substance use research for the San Francisco Department of Public Health, said the majority of people using fentanyl in the city are seeking it out and taking it intentionally.

"It is easy to produce, it is cheap to produce, it is easy to move from one location to another, and it is more efficient in terms of the effect you get for the dollar you spend," said Coffin who has helped develop overdose prevention and syringe exchange programs for the city. "The people who are trading in drugs have switched to fentanyl because it’s so much easier. The people buying are largely dependent on what’s available."

Fifty percent of those who died from overdoses since the start of the year are white, 28% black, 15% Latino and 2% Asian.

"Fentanyl has become the dominant opioid on the street in San Francisco," said Coffin. "Every community that has had that happen has seen a four-fold increase in opioid overdose mortality."

Research shows that the potency of fentanyl is more likely to trigger an overdose than other opioids. "The likelihood for overdose is almost 10 times that of oxycodone," said Coffin, citing an Australian study.

One reason the risk for overdose is so high with fentanyl is it acts almost immediately. While a heroin overdose can takes 20 minutes to progress to cardiac arrest in 30 minutes, with fentanyl it can happen in minutes.

Kristen Marshall is the project manager for the Drug Overdose Prevention and Education Project (DOPE Project), a city-funded program that coordinates San Francisco’s response to overdoses. Marshall spoke with SFGATE for a previous story and said fentanyl use started an upward climb only three years ago, and the impact on overdose death was huge: In 2019, 441 people died of drug overdoses — a 70% increase from 2018.

"Drug supplies move in cycles, and fentanyl is just really notable now because it’s very strong," Marshall said. "The margin of error around using it is small because it’s white powder, it’s often mistaken for other things. You may get a surprise dose of fentanyl when you think you're buying cocaine."

Use has skyrocketed even higher amid the pandemic.

"The one golden rule of overuse prevention is to try to not use alone, and the shelter-in-place order said to keep yourself safe, you need to isolate," she said. "That’s just the opposite. People at high risk went into isolation and that heightened the risk. The chaos put people at higher risk. The worst months were in the dead of the summer when it was most chaotic for this community."

The DOPE Project has trained more than 13,000 people in San Francisco on how to administer naloxone (Narcan) to reverse an otherwise fatal overdose from opioids including fentanyl. 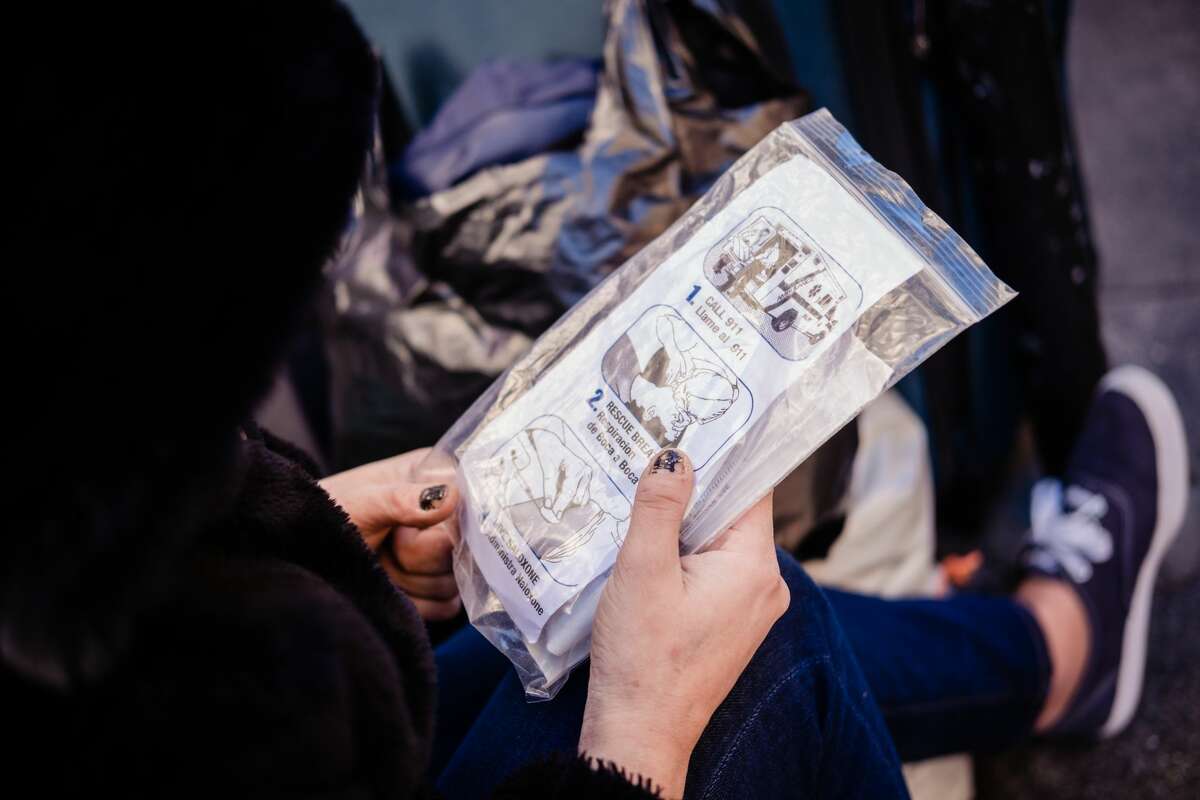 In this file photo, a drug user looks at the package of Narcan she was handed by Paul Harkin, director of harm reduction at GLIDE, who was walking the streets to handout Narcan, fentanyl detection packets and tinfoil to those drug users in need as a part of outreach on the streets of San Francisco on Feb. 3, 2020.

Juliana DePietro, director of harm reduction services at Glide Memorial Church, is also part of the team of people across the city devoted to ending the fentanyl crisis. DePietro said its impact is catastrophic on those without housing and shared details of a recent conversation she had with people working in one of the city's emergency rooms.

"They mentioned that a lot of folks come in after overdosing in the evenings, and then when they're discharged, there’s nowhere for them to go," she said. "There are no treatment programs to take people at midnight. We know people are more susceptible to overdose again after being discharged."

DiPietro manages Glide's range of harm reduction services, from outreach programs to Narcan distribution, that help more than 5,000 people a year. She has witnessed the impacts of these programs firsthand and said if the city takes the right approach in coming years — seeing this as a health crisis and not a criminal crisis — the situation will improve.

"I think if the right investments are made then I think we can address this," she said. "I worry quite frankly about overcriminalization of fentanyl leading to the same devastating impacts and overpolicing that we saw in the war on crack in the '80s and '90s. We know criminalization isn’t the outcome. We need person-centered care, a wide variety of options for folks. Safe consumption spaces, more drug testing, improved safety nets, access to permanent housing and everything in between. I think also we can’t ignore the impact of poverty, systemic racism, and serious social issues, health care concerns, especially those exacerbated by COVID." 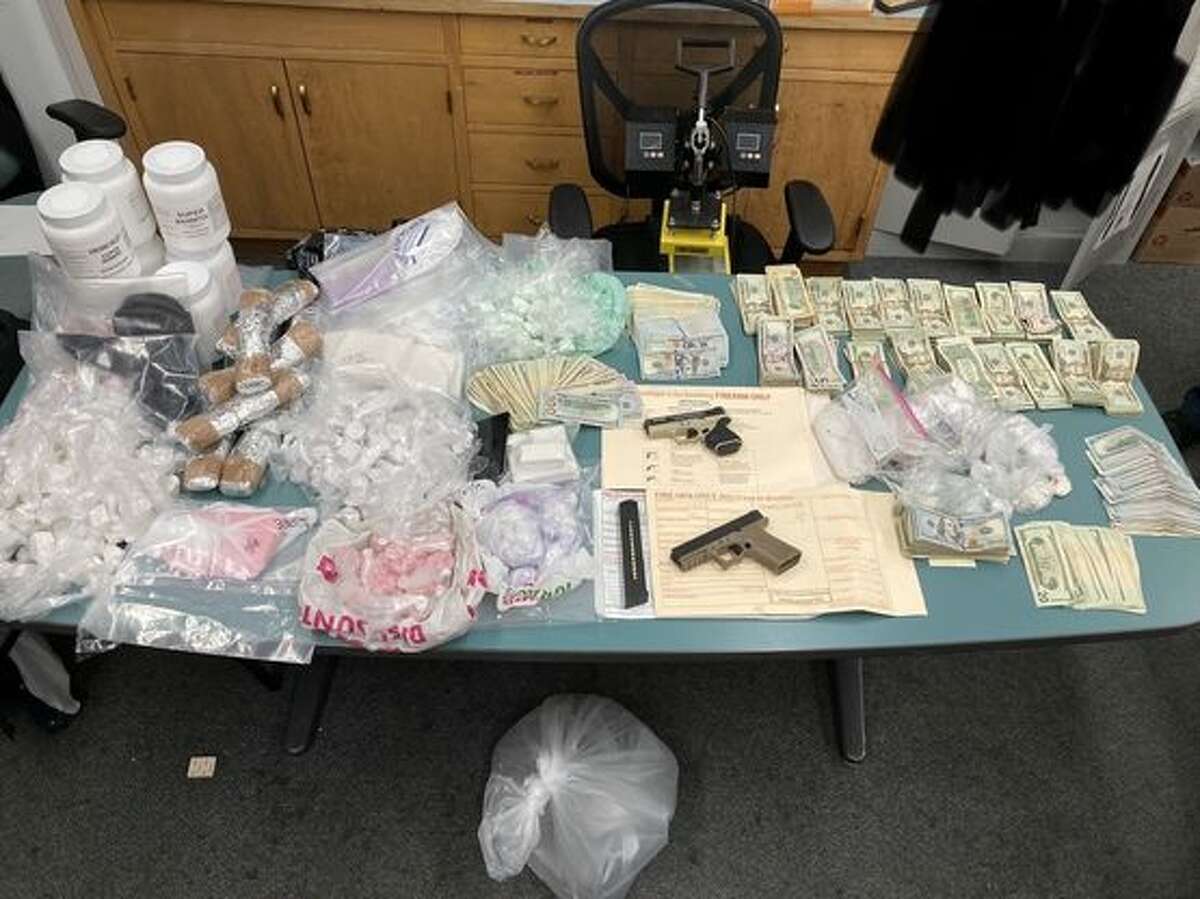 The San Francisco Police Department seized more than 30 pounds of drugs in Oakland on June 3.

The San Francisco Police Department said in a recent press release that since the start of the year it has booked 248 people for sales or possession of dangerous drugs, seized more than $104,000 in cash and confiscated more than 17 pounds of fentanyl, more than one pound of cocaine, almost five pounds of crack cocaine, more than seven pounds of heroin and more than 10 pounds of methamphetamine.

In a bust earlier this month, the police department confiscated than 16 pounds of fentanyl from three locations in Oakland.

"The amount of fentanyl seized in this single operation is enough lethal overdoses to wipe out San Francisco's population four times over," SFPD Chief Bill Scott said in a statement. "Fentanyl remains the primary chemical culprit in the record-shattering number of fatal overdoses plaguing our city, and the recovery of semi-automatic ghost guns along with this haul of deadly drugs most likely intended for the Tenderloin is ominous."

Giants' Sterling Shepard's blunt message to those unhappy with Joe Judge's style: 'You're welcome to leave'

Lizzo Delivers TED Talk About The Origins Of Twerking: 'Welcome To TED Twerk'

Winter Is Coming: The Beijing 2022 Olympics Start In Fewer Than 6 Months

With Delta surging, America is dangerously divided over vaccines

Kathy Hilton once called security when Nicky borrowed her diamonds

Biden allows some Hong Kong residents to stay in U.S. amid Beijing crackdown

Amanda Knox, in her own words

Bezos Slams Musk and SpaceX With Infographic, Musk Gets Final Word With Not-So-Subtle Tweet: 'Thanks to Those ... Who Fight Hard for the Right Thing'

6 'Must Haves' That Determine If You Are Coachable

Kate Bosworth and Michael Polish Separating After 8 Years of Marriage