As early voting winds down across the country, voters are more determined to cast ballots than ever 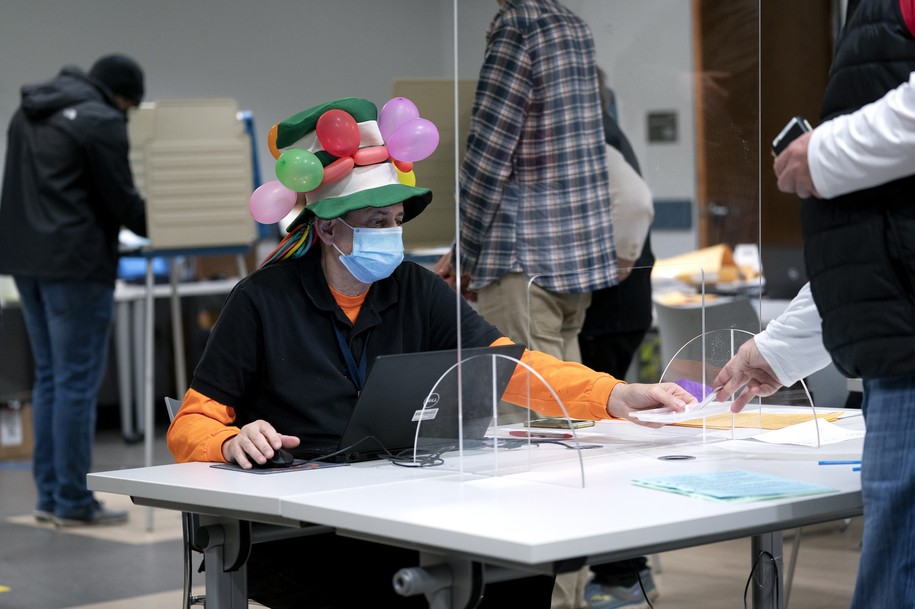 Thank a poll worker today. This one got into the Halloween sprit!

Last Saturday was Vote Early Day, a joyful celebration of the great right and responsibility to shape the direction of this nation. The dispatches from Vote Early Day featured singing, dancing, laughter, and other forms of joy.&nbsp;

The dispatches since are a bit more somber. Sure, folks are celebrating submitting their ballots—I did, after I voted on Tuesday—but most folks’ focus is on getting others to vote. We’re all in this together, and defeating fascism is a group effort.&nbsp;

Let’s take a look at voting this past week, as early voting numbers soared to a remarkable 90 million ballots cast.

Young voters respond to text messages, and NextGen America is reaching out to young voters in 11 battleground states to make sure they have a plan to vote. Sign up to volunteer, and spend some time sending text messages to get out the vote.

This little PSA, coming in at exactly 60 seconds, reminds us of why each of our votes is needed.

Brian wants you to know that it’s safe to vote in his Florida precinct.

In Clay, New York—a suburb of Syracuse—so many people have early voted, they were already out of the beloved “I Voted” stickers at 10:30am on Saturday. Here’s hoping they get re-stocked soon.

We really do, as a country, love those stickers.&nbsp;

Our love of our “I Voted” stickers really is a demonstration of how cool voting is.

I voted early on Tuesday and&nbsp;tweeted about it. Yet I didn’t peel the backing off my sticker. I’m “saving” it for Tuesday.&nbsp;

Look’s like Maria’s dad isn’t ready to wear his sticker, either. I wonder if we have the same plan.

Speaking of dads who vote …&nbsp;this woman’s conservative dad made her proud in 2020.

Okay, that was a tearjerker. Let’s cleanse our palate with some patriotic woozles.

This pup doesn’t want your sticker: They just want you to vote.

Take a tip from this Virginia voter and cover up your candidates of choice with a jacket before you enter the line.&nbsp;

This voter didn’t plan to vote on Saturday, but was pleasantly surprised by what he found.

Other folks were prepared for a long wait and sharing their diversions.

Voters in line on Friday were READY.

This beautiful couple is old enough to remember when Mrs. Neely was barred from&nbsp;voting.&nbsp;

Meet the Neely’s: They are a West Alabama couple ages 101 and 102. They are at the Tuscaloosa County absentee election office this morning making sure their vote is counted and singing hymns while they wait. ❤️ I’ll have the story tonight on @abc3340 pic.twitter.com/BpJMMcU5qM

Some people used their time in line to work through some things.

We now interrupt this Twitter roundup to recycle a beautiful GOTV message from the one and only, late, great, so-badly-missed John Lewis.

“I gave a little blood on that bridge in Selma. I almost died. Some of my friends and colleagues were murdered. I'm not asking any of you to give any blood. I'm just asking you to go and vote like you've never voted before."

Here’s one in real-time. It gets painful to watch after awhile, especially when you know that it didn’t have to be this way in Ohio, and in other states. Enthusiasm is part of the equation, but so are&nbsp;pointed efforts to suppress the vote.

It wasn’t just in Ohio, of course. Check out this footage from Alaska on Saturday.

Wait times were obscene in South Carolina as well.

The polls closed at 1 PM here in Moncks Corner and at 1:30, there are still hundreds of people in line.

I warned my colleagues, but the General Assembly failed to prepare for this election. pic.twitter.com/3GwpKMz3H7

This voter had never experienced a line like this year’s before, and was woefully unprepared for the wait. Brrr!

First time ever I'll still be waiting in line to #vote once the polls close for the day.

Still a longer line on the other side of the building on North Greece. Maybe I shouldn't have worn shorts and flip flops. &#x1f602;&#x1f926;‍♂️#Rochester pic.twitter.com/8rxqwqtqMg

Some people (ahem, those people) responded to long waits in the worst possible way.

People were determined to wait it out, though.&nbsp;

Regardless of the wait, folks were so happy once they did what they came to do.

The encouraging nature of these voting reports can not be showcased enough.

For those not satisfied by a sticker, there are some pretty great perks to voting in one of the many stadiums and arenas around the country that are serving as polling places.

But what about people voting on Election Day? Are they ready? In Lancaster County, all signs point to “yes.”

But it’s important to know how complex those plans are for too many. Reminder: There’s only one party determined to make it&nbsp;harder&nbsp;to vote.&nbsp;

Voter Suppression Example: Does the average American know that in order to stand hours in line, millions of low income ppl have to pay for babysitters, ask for time off of work, etc. Long lines mean $$ spent by people who do not have it, in order to vote for people who have it! pic.twitter.com/hQE2qGapJo

If I had to guess, this voter was in Cleveland, where CNN reported lines as long as four hours.

Jerry, in Los Angeles,&nbsp;made a plan so solid, they didn’t even have to wait in line.

In Oklahoma, that wasn’t the case.&nbsp;

Yet in Tulsa, the privilege of voting was impossible to deny.&nbsp;

From Greenwood to Greenville:

I don’t even care who this South Carolina woman is voting for, honestly. I just appreciate the fact that she must have brightened the line time of everyone waiting in that precinct.

And sometimes, that’s the greatest gift we can offer: improving the unavoidable trial that is waiting in line to vote in this country.

Sometimes the best thing you can do for someone struggling is to join them in the trenches. Cookies also help.

Paul Rudd is handing out cookies to people standing in line — in the rain — waiting to vote.

These folks in Virginia don’t appear to have celebrity support, but they aren’t giving up.

At the polls in Kempsville. The line goes all the way around the shopping center. We spoke with folks who had been there since 8AM and still hadn’t gotten in to vote. pic.twitter.com/eqOfunynAP

These folks in Michigan aren’t giving up either.

There is currently a 2.5 hour wait to vote in a city in Oakland County, Michigan, which is a suburb about 30 minutes from Detroit. The people in line are waiting to pick up an absentee ballot that they can either fill out in person or drop off via drop box later. pic.twitter.com/mcI8t5zr9m

If this voter can see their ballot through, then so can you. So can we all.&nbsp;

I found found out that my ballot has not been accepted. I can't go more than 4 hours without being on a nebulizer. Being out in the cold causes me a great deal of pain. I can't even stand for more than few minutes. I'll be in line to vote.

Remember to check with your circle of friends and family and make sure they’ve got a plan to vote. Make sure they know their rights, too. Here’s an easy way to share that important&nbsp;info.

Finally, don’t be afraid to chat with your fellow voters. You never know who will surprise you.

The guy in front of me in line to vote said “ I think it will be a landslide for trump”. I was wearing my Vietnam hat. He said “bet you are voting for him”. I laughed and said “If a raccoon were running against that damn draft dodger, I’d vote for it.” Short conversation

If Trump attempts to stop the vote counting, we need to take to the streets. The Protect the Results coalition has been preparing for this by organizing hundreds of post-election events across the country. Click here to find, and RSVP for, the Count Every Vote rally near you.

Goals by Zobnin, Kuzyaev and Skopintsev claim the title of best in November
Romelu Lukaku: one and a Half years at Inter are the best in my career
Bulykin on Loko's chances of reaching the Europa League play-offs: it Will be very difficult to do anything
Joao Felix: Atletico are missing Suarez and Costa
Loko didn't know what to do when Red Bull scored first. Naumov about 1:3
Gasperini about Atalanta: we will Go to Amsterdam with a small advantage
Striker Berisha Of Salzburg: We were better than Loko and deserved to win
Source https://www.dailykos.com/stories/2020/10/31/1991341/-As-early-voting-winds-down-across-the-country-voters-are-more-determined-to-cast-ballots-than-ever