Since the first major outbreak last February, South Korea’s COVID-19 response has been a model for other nations—its government praised for its ability to quash each spike in infections without severe lockdowns, relying instead on quick action, extensive testing and tech-powered contact tracing, along with social distancing and public cooperation.

But lately, President Moon Jae-in’s popularity inside the country has been sinking—in part because of frustration over the speed of vaccine rollout. South Korea has yet to authorize the use of a COVID-19 vaccine, or even receive any doses. In a poll last month, 60% of respondents said the government should move faster with inoculations.

The country is not alone in the Asia-Pacific region.

More than 40 million vaccine doses have been administered worldwide, according to data compiled by the NGO Our World in Data. The U.S. started its vaccination program on Dec. 14; now more than 10.5 million people have received their first dose. The U.K. gave its first jab on Dec. 8, and the European Union started Dec. 27.

But most nations in the Asia-Pacific region, including South Korea, won’t begin vaccinating citizens until February or March. New Zealand, another COVID-19 success story, won’t start vaccinating its healthcare workers until April. In the wealthy business hub of Singapore, just 6,000 people have received doses of the Pfizer-BioNTech vaccine since Dec. 30, out of a population of 5.7 million.

It’s the deft handling of COVID-19 by many countries that has contributed to them becoming laggards in the vaccine race, experts say. Although countries from South Korea and Japan to Thailand are battling resurgences of the virus now, governments do not feel the same urgency to begin vaccinating because infections are largely under control.

“The U.S. and U.K. face a raging, uncontrolled surge that is reaching unthinkable levels of illness and death, threatening to break their health systems, undermining national economies, worsening inequities and stoking social instability,” says J. Stephen Morrison, the director of Global Health Policy Center at the Washington-D.C.-based think tank the Center for Strategic and International Studies (CSIS). “That pattern is absent in Asian countries which had in place the systems to intervene early and strongly.”

Comparatively low infection rates have bought governments time to wait to observe the safety and efficacy of the new vaccines as they rollout elsewhere in the world.

Price is another consideration. South Korean Health Minister Park Neung-hoo said in November that the country could wait until it was able to negotiate a reasonable price for the vaccines.

A scarcity of supply—with the countries that make the vaccines keeping most doses for themselves, has also hampered the ability of countries in Asia to obtain doses early. 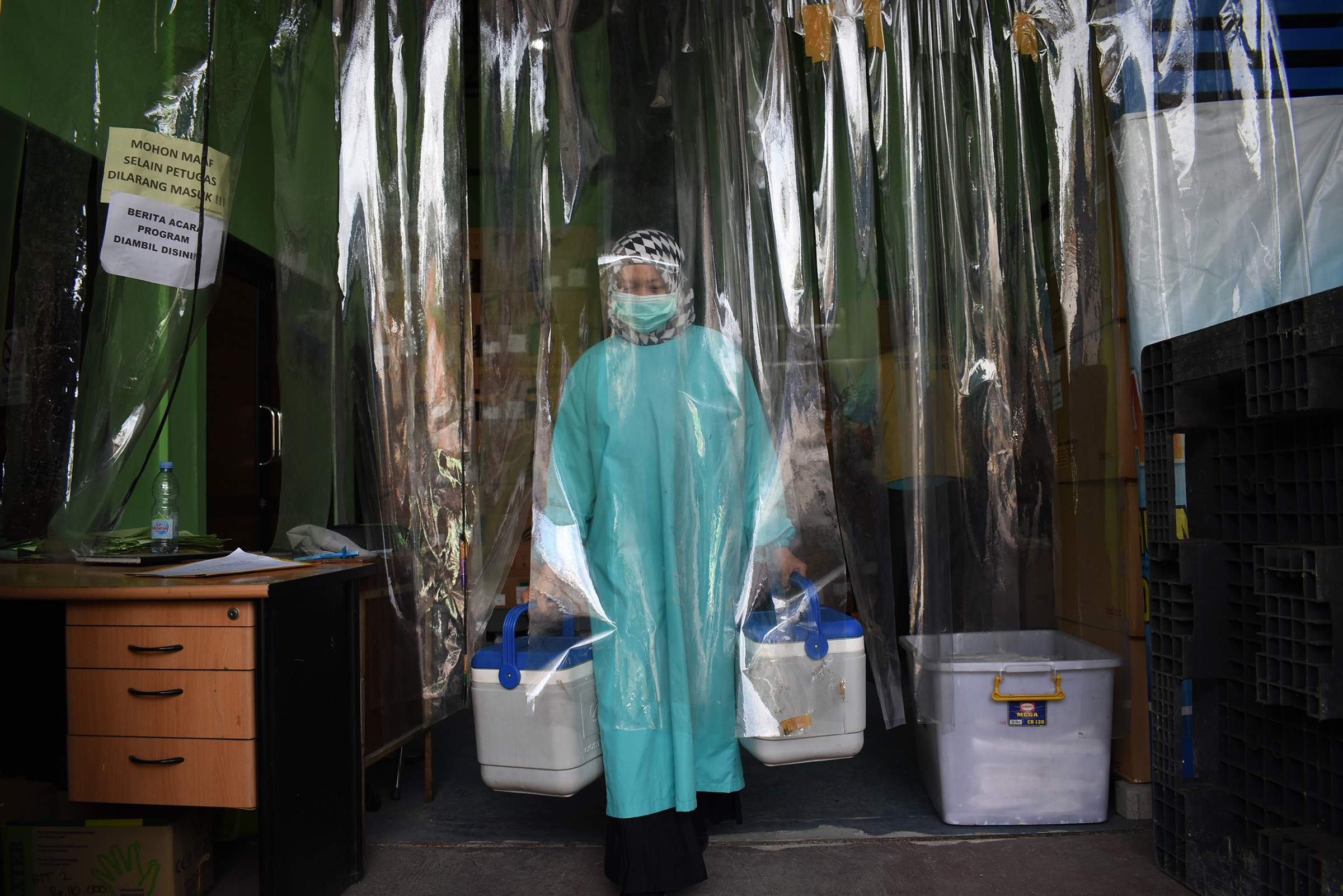 A health worker delivers containers of Covid-19 vaccines produced by China's Sinovac from a cold room in Bandung on Jan. 13 as the sprawling archipelago of nearly 270 million kicks off a mass inoculation drive in a bid to control soaring case rates

Some countries have also pushed forward with vaccine rollouts despite questions over the safety and efficacy. China authorized the use of domestically-produced vaccines in July before they completed phase 3 clinical trials.

Indonesia is using the CoronaVac vaccine from Chinese manufacturer Sinovac. Efficacy data from in trials of the vaccine have varied widely—with rates as low as 50.4% according to one study in Brazil.

India has authorized the use of a vaccine from Oxford University and AstraZeneca, which has also been approved by U.K. regulators, alongside a locally-developed jab called Covaxin. The maker of the latter, Bharat Biotech, has not released phase 3 trial data—leading some to express concern about its safety and efficacy. 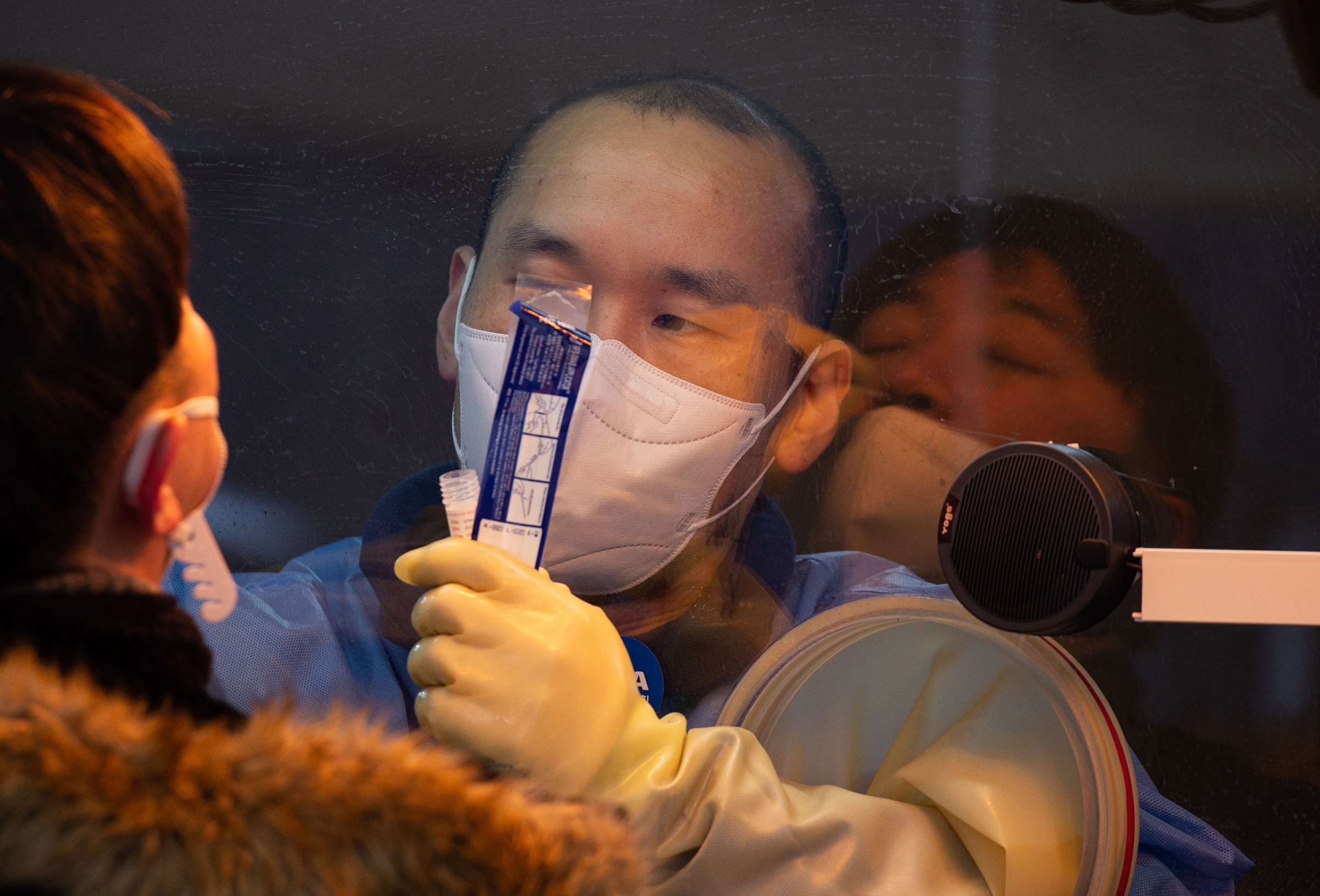 A health worker collects swabs from a citizen for COVID-19 testing at a makeshift clinic outside the Seoul city hall on Jan. 5

Elsewhere in the Asia-Pacific region, government regulators have sounded a note of caution about existing vaccines. Health experts in Hong Kong said the city’s vaccination program, which is due to start in February, might be delayed amid concerns over the safety of the Pfizer-BioNTech vaccine. Officials later recommended approval of the vaccine with the caveat that a mass vaccination drive could be stopped by a “circuit-breaking” mechanism if safety concerns arise.

The Hong Kong experts said they would seek more information from regulatory agencies in Norway, where more than 20 elderly people died after receiving the vaccine (though the causes of the deaths remain unclear). The Chinese enclave is also likely to delay the rollout of Sinovac’s vaccine due to a lack of trial data, the Financial Times reported.

That caution over the vaccines has sometimes veered into skepticism. On Jan. 5, Australian Prime Minister Scott Morrison explained the February rollout for vaccines by falsely suggesting other countries like the U.K. didn’t fully vet the vaccines before authorizing their use.

“Australia is not in an emergency situation like the United Kingdom. So we don’t have to cut corners. We don’t have to take unnecessary risks,” he told a radio station. A spokesperson later backtracked on those comments.

However, Morrison has added in recent days that Australia, which has had fewer than 30,000 COVID-19 cases and confirmed just 13 infections on Jan. 17, is seeking additional information about the deaths in Norway, as well.

South Korea’s health minister said at a press briefing in early December that the country’s relative success at tackling the virus meant that the government did not need to rush a vaccine; instead regulators would allow for time to allow potential side effects to become known.

That caution by governments may be a reflection of hesitancy to receive COVID-19 vaccines. Japan has one of the lowest levels of confidence in vaccines in the world, according to a September 2020 study of surveys about vaccine confidence done between 2015 and 2019.

That means that a rush to begin vaccinations might deter its citizens from deciding to receive the shot. Although Tokyo has secured the rights to at least 540 million doses of COVID-19 vaccines and plans to roll out vaccines in March, the country has yet to grant regulatory approval for any vaccine.

More recently, a YouGov survey in December found a wide variance across the region when it came to willingness to receive a COVID-19 vaccine. Some 83% of Thais and 67% of Indians said they were willing to get a COVID-19 jab, while the figure in Singapore, the Philippines, Taiwan and Hong Kong was less than 50%.

But some leaders say waiting longer to roll out the vaccine won’t mean their countries will fall behind. In New Zealand—which has had fewer than 2,300 cases among its 5 million residents—Prime Minister Jacinda Ardern has defended the timeline, which won’t see immunizations of the public until the second half of 2021.

The Coronavirus Brief. Everything you need to know about the global spread of COVID-19

No charges after KKK flag hangs next to Black family's home

Health Insurance: How to select adequate sum insured to secure all family members

House to vote on sweeping government, ethics and election bill

Up Your Zoom Game With This Light on Amazon That Has 1,877 5-Star Reviews

Dear Care and Feeding: My Son Is Bullying His Asian Classmate About the Pandemic

Ledecky returns to competition with time ticking to Tokyo

Tim Allen: ‘I Kind Of Liked' That Donald Trump Pissed People Off

Report: No fans from abroad for postponed Tokyo Olympics

The COVID-19 Relief Bill Could Be A Huge Turning Point For Child Care In The U.S.

Hungary pulls its ruling party out of EU’s conservatives

The indignity of Philippines' 'homeless' dead: leased graves that expire

Fox News' Weird, Full-Day Freakout Over Dr. Seuss Gets The Treatment On Twitter

We asked governors what they want from Biden. Here’s what they told us.

Trump aides build out the MAGA-verse with new groups