American police or sheriff’s patrol officers make anywhere from just under $19,000 up to $131,000, with salaries varying significantly by region and the department level, statistics analyzed by Fox news show.

A police or sheriff’s patrol officer makes a mean hourly wage of $33.66 and an average yearly salary of $70,000, but their annual pay varies significantly by region and jurisdiction, the Bureau of Labor Statistics' (BLS) most recent data for May 2020 shows.

Broken down by state, officers in California make the highest yearly salary, with $107,440, while those in Mississippi make the lowest, at $37,210 per year, statistics show.

Meanwhile, looking at the more local level by examining the salaries of officers employed in metropolitan and non-metropolitan areas, BLS data shows mean yearly pay ranges from under $19,000 in some places and more than $131,000 in others.

"We have tens of thousands of police departments across the nation, which is probably the most inefficient and ineffective policing model in the free world," said Miami Police Chief Art Acevedo, who also serves as president of the Major Cities Chiefs Association. 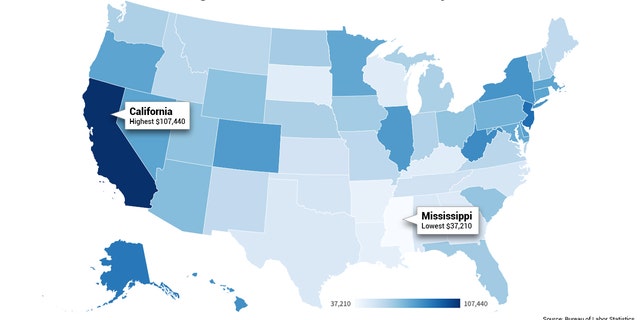 Officers in Aguadilla-Isabela, Puerto Rico, for example, make $18,980 on average per year. In Guayama, Puerto Rico, they make a mean salary of $21,370, to name two areas in the commonwealth, according to data.

Other areas of the country where officers make an average annual salary of under $40,000 include parts of Arkansas and Mississippi, as well as Central Louisiana, Macon, Georgia; East Georgia’s nonmetropolitan area, Northeast South Carolina and South-Central Kentucky, figures show.

"You look across the country, there are a lot of departments where officers are underpaid, which is a recruitment issue, a retention issue, and not to mention a quality of the candidate you're going to get in the first place issue," Acevedo told Fox News.

Meanwhile, officers in Sunnyvale, San Jose and Santa Clara, California, are paid, on average, $131,090 per year, marking the highest mean annual salary of the country's metropolitan areas. Second-highest are the San Francisco, Oakland and Hayward, California, areas, with a mean annual salary of $122,570, BLS figures show. All 10 of the top-paid police departments in metropolitan regions are located in California.

Top-paying non-metropolitan areas include the North Valley, Eastern Sierra and North Coast regions of California, which range in mean annual pay from $82,740 to $93,570, as well as Hawaii and its Kauai area, with $84,370, and Alaska’s non-metropolitan jurisdiction, with $79,230, BLS statistics show. 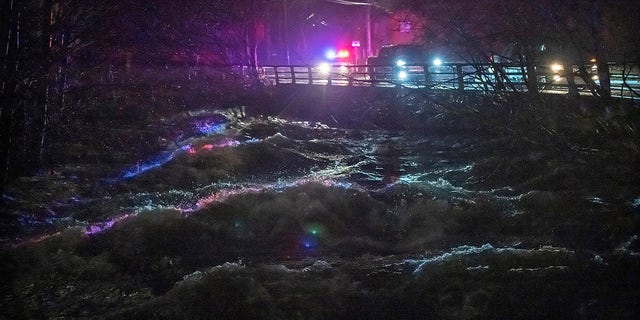 Retired police Sgt. Betsy Brantner-Smith, National Police Association spokesperson, noted how much police compensation varied so regionally, such as in Mississippi, where, looking at the state as a whole, the average hourly wage for officers is $17.89, according to BLS numbers.

"I made a lot more than that in the Chicago metro area," she told Fox News. "There is no real standard -- it has to reflect where you live. So, I was a cop in the Chicago suburbs. It's pretty expensive to live there, but not as expensive as Los Angeles. And so it does need to reflect the area."

Brantner-Smith highlighted the range of training and "specialty" information officers need to have to respond to the litany of police calls.

"As a police officer for 29 years, I did everything from, dealt with mentally ill people …  to negotiating people into letting their hostages go and talking to people out of killing themselves and delivering a baby, and tasering somebody 30 years younger than me through a neighborhood who just committed a burglary, and everything in between," she said.

"In today's atmosphere, [there is] the expectation that police officers are going to have so much more specialty training, especially when we're talking about mental illness and and utilization of various different kinds of weapons and making sure that we're always exactly within policy and things like that." 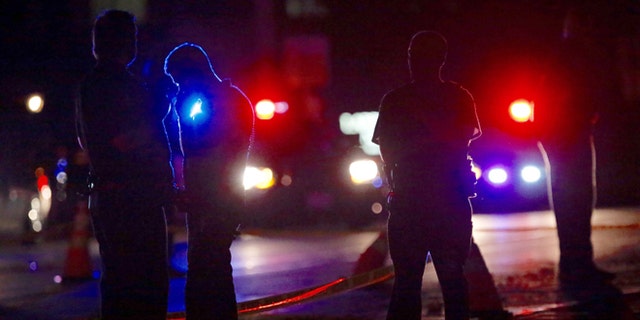 Investigators at the scene of a police-involved shooting on Wednesday, July 6, 2016, in Falcon Heights, Minn. (Associated Press)

As of May 2020, the Bureau of Labor Statistics estimated there were 654,000 police and sheriff's patrol officers employed throughout the country at the non-executive or non-supervisor levels.

Dr. John DeCarlo, an associate professor at the University of New Haven’s Henry C. Lee College of Criminal Justice and Forensic Sciences, estimated that about $304 dollars are spent on police protection per person in the United States. DeCarlo told Fox News there are approximately 18,500 police departments throughout the country, which are funded by local tax dollars.

When asked about police officer retention rates and the impact of police salaries on such figures, Acevedo said it’s one of a combination of factors affecting cops’ decision to stay or leave the job.

"I think that having competitive salaries is important and in a lot of places, police officers are not paid well," Acevedo said. He said mistrust of government was at a "historical, fever-pitch high" and police are "the most visible cog of government."

"The profession is under such scrutiny by a lot of folks that it's actually creating, not just, again, a recruitment problem, but it's also creating a retention problem. We're starting to see more officers retire as soon as they can," Acevedo added. "It's becoming more and more apparent of a challenge and a growing challenge for a lot of agencies across the country."

Most intense heat wave of year hits L.A. area: What you need to know

'Memo' Ochoa becomes a shareholder of the Mexican unicorn Kavak

Bill Gates Released His 5-Book Summer Reading List, Themed Around the Conflict Between Humans and Nature

With COVID tamed, it’s a ‘grand reopening’ in California

More evidence suggests COVID-19 was in US by Christmas 2019

Pixar’s ‘Luca’ invites you to summer in the Italian Riviera

Behind in quantum computer race, Germany gets boost from IBM