The Covid-19 pandemic upended daily life so drastically that there was a moment when it seemed to be making a dent in the climate crisis. Rush-hour traffic disappeared, global travel slowed to a crawl, and the resulting economic tailspin sent energy-related pollution plummeting almost 6 percent globally. This kind of decline in pollution is unprecedented in modern human history — it’s as though the emissions output of the entire European Union had suddenly disappeared. It led many to wonder if the Covid-19 crisis would at least give us a little extra time to avert climate emergency.

More than a year after Covid-19 abruptly changed everyone’s routines, the United States is itching to return to “normal,” and some parts of the economy are approaching business as usual. But for the climate, “back to normal” means pollution is rebounding and, worryingly, climate change is accelerating.

“We ultimately need cuts that are much larger and sustained longer than the Covid-related shutdowns of 2020,” said Ralph Keeling, a geochemist who measures carbon pollution at Mauna Loa.

As the Covid-19 pandemic continues to rage globally but starts to abate in the US, here are four ways to understand the new “normal” of the climate crisis.

1. Climate change is accelerating despite the pandemic

While emissions dropped last year, carbon and methane concentrations in the atmosphere just reached their highest-known level in millions of years. Think of it as filling a plugged bathtub with water: Even if you turn down the faucet for a little while, the water will keep rising.

The atmospheric concentration of carbon rose to 419 parts per million in June 2021, based on National Oceanic and Atmospheric Association measurements that have been taken in Hawaii since 1958. This is a level probably not seen since around 4 million years ago — when sea levels were 78 feet higher than they are today.

A chart from NOAA shows that CO2 concentrations from human activities are not only increasing, but going up at a faster rate as time goes on. (The red line shows seasonal fluctuations in CO2.) 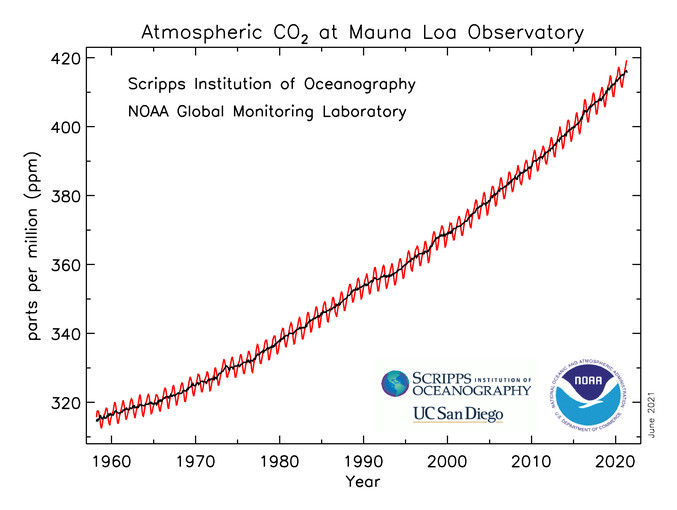 Carbon dioxide is rising in the atmosphere, accounting for annual fluctuations, and measured by NOAA and the Scripps Institution of Oceanography.
NOAA Global Monitoring Laboratory

As NOAA explained in its recent press release, “There was no discernible signal in the data from the global economic disruption caused by the coronavirus pandemic.” What’s more, Pieter Tans, a climate scientist with NOAA, told me, “If we managed to keep emissions constant, that’s not enough. Then CO2 would continue to go up at the same rate that we’ve seen in the last decade. Emissions really have to go to zero to stop this problem.”

Looking at the longer-term trends, it’s clear that the pandemic did not slow the acceleration of climate change in the way that some hoped.

In 2020, renewable energy overtook coal consumption in the United States, and electric vehicle purchases soared 43 percent over their 2019 level. But fossil fuels still reign in transportation and the power sector, the world’s two biggest pollution sources.

During the pandemic, transportation took the biggest hit. Travel is still down globally, but in May, the TSA recorded the biggest day for US air travel since March 2020. The number of US air passengers reached 90 percent of 2020 levels, according to TSA data. Passenger car travel also plunged by about half during the pandemic, but some measurements compiled from GPS data show car traffic surging even past its 2019 levels.

The pandemic led to a temporary crash in emissions, as shown by the International Energy Agency’s tracker of 2020’s monthly emissions change compared to 2019. Around the start of December, where the line turns red, monthly emissions surpassed their 2019 levels. 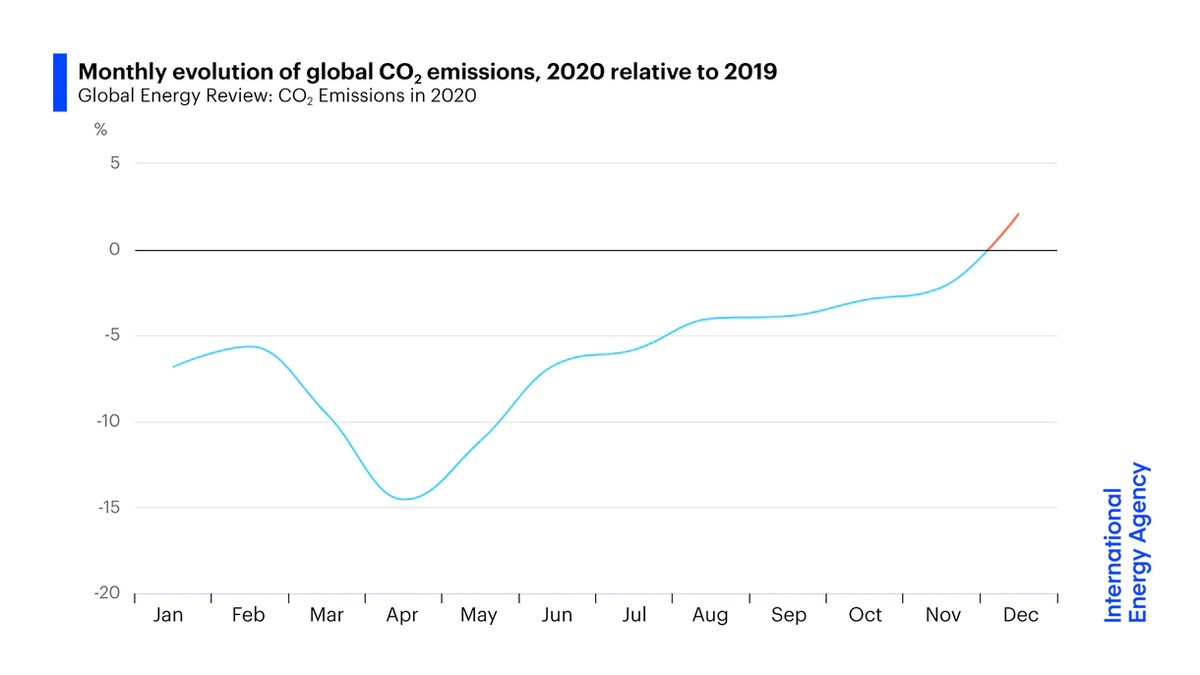 Of course, these are signs of a rebounding economy. But when fossil fuels still run the underlying fundamentals of the economy, we’re gambling dangerously with climate change.

Worse, it’s still possible for pollution to accelerate if the world chooses “business as usual” in its post-pandemic recovery. Last year, climate scientists from the University of East Anglia, Stanford, and other institutions pointed to the possibility that emissions could rebound to levels worse than before if politicians delay climate action for temporary economic gains. The former Trump administration justified environmental rollbacks in part by citing the pandemic’s impact, and now the Wall Street Journal reports that China is limiting the rollout of its national carbon-trading program later in June.

3. The global target of 1.5 degrees Celsius is almost out of reach

One of the key developments of the 2015 Paris climate agreement was a new target for containing climate change: restricting warming to 1.5°C, and “far under” the more disastrous 2°C.

In that effort, “normal” won’t cut it. The return to flying, driving, and commuting carves away from a limited global budget of pollution, which represents everything the atmosphere can afford before the 1.5°C target is reached. A United Nations agency, the World Meteorological Organization, updated its analysis in May and underscored that we’re essentially out of time. It found a fairly good chance — 44 percent — that the Earth will hit 1.5°C of warming in one of the next five years. That’s double the odds from just one year ago.

Last year was also one of the hottest on record, at 1.2°C above the pre-industrial average, and parts of the world are warming unevenly and have already surpassed 1.5°C. These variations don’t sound huge, but their real-world impacts can be catastrophic and concentrated in particular regions.

Parts of the Middle East hit 125 degrees Fahrenheit in June, a dangerous record even before summer settles in. The American Southwest could see similar temperatures this summer. Extreme heat causes more deaths than any other type of weather disaster and can cause power failures and infrastructure problems such as warping roads and railroad tracks.

Not only is the heat a public health threat, it also exacerbates deepening droughts that fuel the conditions for widespread wildfires.

Never a good sign to see an "Excessive Heat Watch" in effect for the hottest region in the U.S. Temps could soar to near 120 deg F next week, according to the Nat'l Weather service. pic.twitter.com/efwcWMggll

In a warming world, these are not freakish events. These events, and worse than we’ve experienced yet, become the new normal.

4. Public opinion hasn’t changed either, which is surprisingly good news

A return to normal doesn’t have to mean climate change careens out of control. It’s a path governments choose if they continue to subsidize fossil fuels and fail to meet the challenge of investing in renewable infrastructure.

The pandemic hasn’t diminished people’s appetite for action on climate change, argues Anthony Leiserowitz, the director of the Yale Program on Climate Change Communication who has studied American opinions on climate change. “Public opinion about climate change hasn’t changed at all. It actually picked up a little bit,” Leiserowitz said. “I don’t see any evidence that people’s views have changed dramatically, either because of the pandemic or the economic crisis.”

Similarly, in the Great Recession of 2009, Leiserowitz studied the effect of unemployment, home value, and the economic downturn on the public’s views on climate change. He was surprised to find it did not diminish voter attitudes on climate. “A majority of Americans actually think that taking action to deal with climate change will grow the economy and increase the number of jobs,” he said.

Most Americans don’t think there has to be a zero-sum trade-off between climate change and economic growth. The Biden administration has capitalized on that view, making the case for “building back better” and trying to boost the economy with a climate-focused infrastructure package. But this can’t happen without large-scale political action. The US may savor a returning sense of normalcy — but the whole world need to remember that normal was never good enough.

Prosecutors Say They Have Evidence Of More Abuse And Bribery In The R. Kelly Case