On Thursday they faced off in Florida. Friday – with just four days to go until the general election on Nov. 3, the showdown takes place in Minnesota, which suggests that a state long carried by Democrats in presidential elections may be in play.

BIDEN AND TRUMP FACE OFF IN BATTLEGROUND FLORIDA

President Richard Nixon was the last Republican to win the state – during his 1972 landslide re-election. 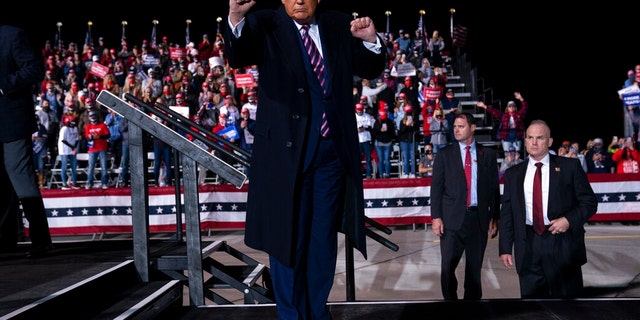 But four years ago Trump narrowly lost Minnesota and its 10 electoral votes to 2016 Democratic nominee Hillary Clinton, and for over a year the president and his re-election campaign have been eyeing the state in hopes of breaking the losing streak and flipping it from blue to red.

An average of the latest public opinion polls in the state indicate the former vice president with a mid-single digit advantage over Trump, but the surveys suggest that Trump’s gained ground over the past month. Biden’s strength is concentrated in the Twin Cities and the surrounding suburban counties, while Trump polls best in the more rural areas across the rest of the state, which is known as Greater Minnesota.

The president’s event – which has been planned for a few days – is being held at 5pm local time at the airport in the southeastern city of Rochester, although the location of the event was moved twice due to the state’s coronavirus restrictions on large crowds. And the event will be dramatically smaller than the president's typical rallies, where supporters are packed together with out social distancing, and there's limited wearing of masks.

Taking aim at the state's Democratic governor and attorney general, the Trump campaign said Thursday night that "thanks to the free speech-stifling dictates of Gov. Tim Walz and Attorney Gen. Keith Ellison, only the first 250 people will be admitted." 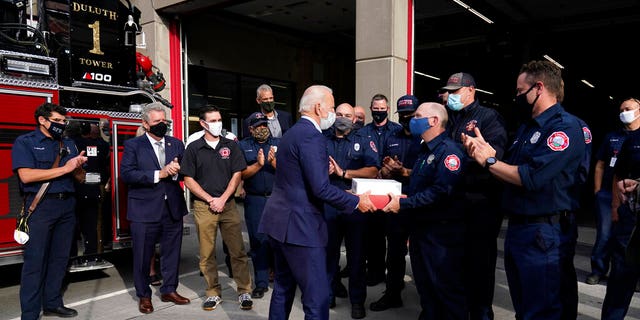 On Thursday afternoon, the Biden campaign announced that the former vice president would hold a socially distanced drive-in car rally in the capital city of St. Paul at 3:30pm local time, just 90 minutes before the start of Trump’s event.

Koch, the first and only woman elected as the state senate majority leader in Minnesota, emphasized that Democrats “always take Minnesota for granted. No one can ever believe that Minnesota’s in play and that was a mistake that Hillary Clinton’s camp made in 2016 and it very nearly cost them. Biden’s camp at least seems to be heeding that, but they always seem to be playing catch up.”

But Democratic strategist Mike Erlandson said that the trips Friday by the two national party standard bearers “tells me that the Trump campaign is a little bit desperate and that Biden is feeling good enough that he can come to a state that looks to be pretty blue at the moment.”

The former state Democratic Party chair told Fox News that “it’s close,” but that “all the early voting indicates that it’s going very well in Minnesota” for Biden. Erlandson said that Biden adding his trip at the last minute after Trump’s stop was already planned suggests that Biden may be attempting to “undo whatever the president is trying to do.”

Friday evening’s rally will be the president’s fourth campaign stop in Minnesota this year. And Biden’s Twin Cities visit will be his second to the state since formally becoming his party’s nominee at the Democratic Convention in August.

The events on Friday will be the second time both Biden and Trump will be in the state on the same day. Both campaigned in northern Minnesota on Sept. 18, with Biden in Duluth and Trump in Bemidji.

The Trump campaign started building resources in Minnesota early in the 2020 cycle. Biden’s campaign has been catching up in recent months and both teams have shelled out big bucks to run ads in the state in the closing two months of the campaign.

Before arriving in Minnesota, Biden campaigns in neighboring Iowa, another swing state. And following his Twin Cities stop, the former vice president campaigns in another neighboring battleground, Wisconsin.

The president also campaigns Friday in Wisconsin, as well as the battleground of Michigan.

Inter will fine Vidal for sending off against Real Madrid. The player received two yellow cards in 7 seconds
Conor: Rest in peace, Diego
Some love Ronaldo, some love Messi, but they can't even dream of the adoration that Maradona received. Ardiles about Diego
Argentina is drowning in tears. Maradona's coffin displayed in the presidential Palace
Dimitar Berbatov: Ramos will do well at Manchester United. Tiago Silva has proved that it is never too late to move to the Premier League
Maradona's lawyer: the Ambulance drove for half an hour. For 12 hours, my friend was left without medical supervision. Criminal idiocy
Gennady Orlov: I Don't agree that Messi is more talented than Maradona. Leo did not become the leader of Argentina
Source https://www.foxnews.com/politics/biden-and-trump-hold-dueling-rallies-in-battleground-minnesota-friday

Column: Newsom and legislators got a surprise windfall. They should resist the urge to spend

Certainty, simplicity and enjoyment: Main opportunities for brands before the end of 2020