Now is the time for President Joe Biden to speak out against apartheid in Israel and for the U.S. to no longer support state-sanctioned violence and repression against Palestinians.

Violence and civil unrest have broken out in Israel and the occupied Palestinian territories, with the Israel Defense Forces (IDF) waging airstrikes with U.S.-supplied bombs and flattening Palestinian high rise apartment buildings in Gaza and the Palestinian militant group Hamas launching rocket attacks. Dozens have been killed, mostly Palestinians, including children. This, as violence escalates in the streets, with Jewish supremacist lynchmobs in Proud Boys gear calling for “death to Arabs” and attacking Palestinians and Palestinian businesses with material support, and incitement from, the Israeli government.

Two flashpoints ignited the most recent violence. One was the forced mass eviction of Palestinians from the Sheikh Jarrah neighborhood of East Jerusalem to hand over the property to Jewish settlers. Such a forced removal of people because they are Palestinian amounts to ethnic cleansing and is part of a greater effort to socially engineer the city of Jerusalem to make it more Jewish and displace and overpower the Palestinian population. 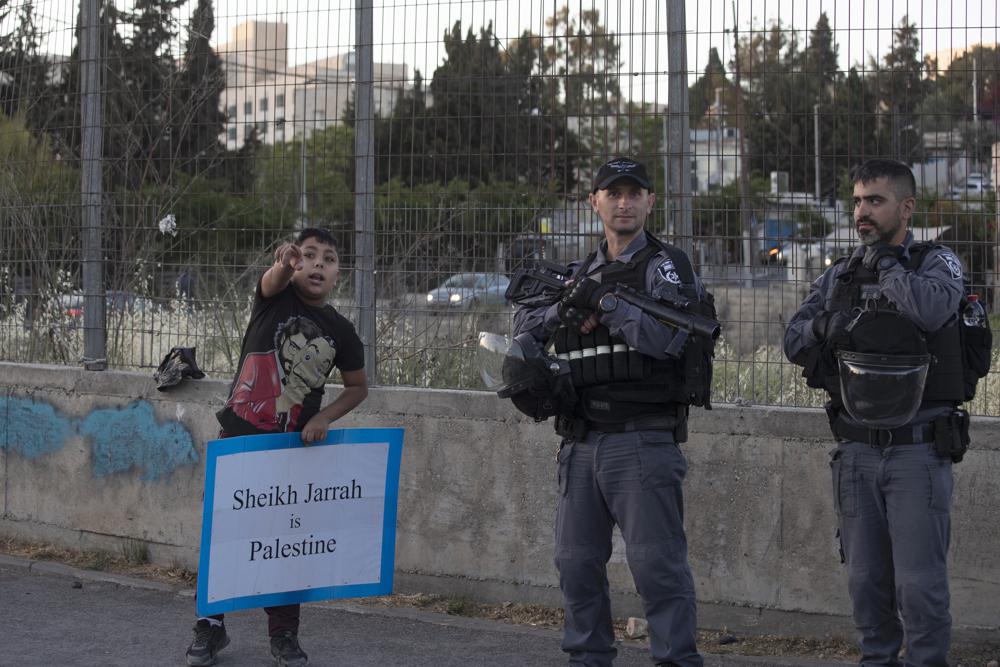 A Palestinian boy speaks to police during a protest against the forcible eviction of Palestinians from their homes in the Sheikh Jarrah neighborhood of east Jerusalem, Friday, May 7, 2021. (AP Photo/Maya Alleruzzo)

And the Israeli police stormed the Al-Aqsa mosque — one of the holiest sites in Islam — with teargas and stun grenades during the holy month of Ramadan.

Responding with the typical white American narrative of the Mideast “conflict,” Biden said Israel has “a right to defend itself” from Hamas rockets while speaking to Israeli Prime Minister Benjamin Netanyahu, not mentioning the many Palestinians killed by Israeli attacks this past week. Biden also said he did not think the Israeli military airstrikes in Gaza were a “significant overreaction.” And while the President would later say upon the upcoming White House Eid celebration that Palestinians and Israelis “deserve to live in dignity, safety and security,” we do not see a U.S. foreign policy reflecting this empty sentiment.

But Biden’s statement won’t cut it, coming from the leader of the country that gives Israel $4 billion in aid annually and is in a position to make the Mideast nation do better, be better and stop colonizing another people.

In response to Biden’s statement that Israel has a right to defend itself, Rep. Alexandria Ocasio-Cortez asked a question: “But do Palestinians have a right to survive? Do we believe that? And if so, we have a responsibility to that.” The Squad member added, “The United States must acknowledge its role in the injustice and human rights violations of Palestinians. This is not about both sides. This is about an imbalance of power.”

Other members of Congress are speaking up for Palestinian rights and questioning America’s funding of the Israeli occupation.

“For decades, we have paid lip service to a Palestinian state, while land seizures, settlement expansion, and forced displacement continue, making a future home for Palestinians more and more out of reach,” said Reps. Ilhan Omar (D-Minn.), Andre Carson (D-Ind.) and Rashida Tlaib (D-Mich.) said in a statement.

“We are anti-war, we are anti-occupation and we are anti-apartheid,” said Rep. Cori Bush (D-Mo.), noting Palestinians face state violence, militarized policing and occupation of their communities as they are forced to walk through checkpoints and try to live their lives.

And calling a budget “a reflection of our values,” Rep. Ayanna Pressley (D-Mass.) said, “We cannot remain silent when our government sends $3.8 billion of military aid to Israel that is used to demolish Palestinian homes, imprison Palestinian children and displace Palestinian families.”

The violence in Israel-Palestine has escalated of late, but the violence was always there. That violence stems from Israel’s military occupation of Palestinian land since 1967, with no end in sight or path for Palestinians to be free with equal rights, self-determination or statehood.

Meanwhile, B’Tselem, based in Israel, referred to the nation as a “regime of Jewish supremacy from the Jordan River to the Mediterranean Sea.” The organization says it rejects the claim that Israel is a democracy behind Green Line (its pre-1967 borders), with a temporary military occupation, but rather the government has entrenched its control over the Palestinians through land allocation to benefit the Jewish population, denial of citizenship rights for Palestinians, movement restrctions and second-class political access for Palestinian citizens of Israel, and no political rights for Palestinians living in the territories.

Why should Black people care? There’s such a thing as solidarity. Because oppressed people must stick together as a unified front. Nobody is free if somebody isn’t free, and we must live in a world free from war and police violence. Know there are George Floyd murals in the Palestinian territories. And during the uprising in Ferguson, Missouri, Palestinian activists instructed Black Livers Matter protesters on how to deal with police tear gas, which was manufactured in Pennsylvania and used on BLM and Palestinian protesters.

As much as they love him today, Rev. Dr. Martin Luther King lost support from liberal allies and the civil rights establishment when he spoke out against the war in Vietnam. King connected the dots and viewed “war as an enemy of the poor.” He understood the connection between American support for war and colonization abroad and continued poverty and denial of civil rights at home.

“We stand with the Palestinian people, and support their right as an oppressed, colonized people to resist how they see necessary,” the Walter Rodney Foundation said. “As Kwame Nkrumah, Kwame Ture, Malcolm X and many more often reminded us: the Palestinian struggle is a Pan-African struggle.” 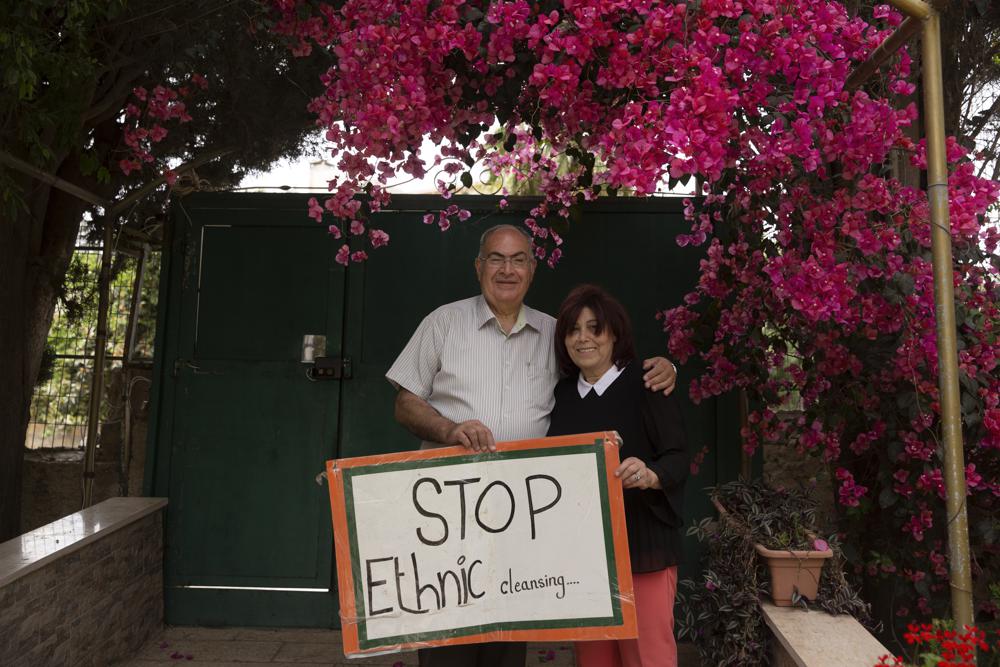 Samira Dajani and her husband, Adel Budeiri, pose for a portrait in the garden of their home, where she has lived since childhood, in the Sheikh Jarrah neighborhood of east Jerusalem, Sunday, May 9, 2021. (AP Photo/Maya Alleruzzo)

The singer Halsey tweeted to her 14.1 million followers: “It is not ‘too complicated to understand’ that brown children are being murdered + people are being displaced under the occupation of one of the most powerful armies in the world. It is willful ignorance to conflate these simple horrors with religion + geopolitics. #FreePalestine”

And displaying a photo of an Israeli soldier pointing a rifle at a rock-throwing Palestinian child as an example of the “both sides” argument, Anthony V. Clark said what is happening in Palestine is not complicated.

Further, just as Palestinians have created murals for Floyd, Palestinians — including Black Palestinians — are losing their lives to state-sponsored violence. Black-Jewish filmmaker and writer Rebecca Pierce tweeted about Mohammad, an Afro-Palestinian man in Jericho known for his kebab sandwich cart, who was just killed by the IDF.

“This is the human cost Palestinians bear daily,” she said of the occupation.

Meanwhile, U.S. policy in Israel and Palestine is steeped in white supremacy. When New York City mayoral candidate Andrew Yang vocally supported the Israeli bombing of Gaza, he received kudos from former President Donald Trump advisor and white supremacist Stephen Miller. And former Israeli ambassador to the U.S. Ron Dermer said Israel should focus its attention on courting white evangelical Christians rather than American Jews because they provide the “backbone of Israel’s support” in the states and their support is “passionate and unequivocal.”

And in the midst of this despair, Israel, which has a universal health system, is touted for its successful COVID-19 vaccination program. However, Israel has left Palestinians out of the vaccinations. Now that’s apartheid.

Biden can stop this and become a part of the solution. But the people, those who love freedom and justice, and don’t want to see more babies die, must demand change. As America confronts its own reckoning, how can it overcome its problems of systemic racism and police violence at home as it gives billions of dollars to Israel to maintain an oppressive apartheid system and brutal occupation?

Have you subscribed to theGrio’s “Dear Culture” podcast? Download our newest episodes now!