The Senate Homeland Security and Governmental Affairs Committee is slated to holding a hearing on Mayorkas' nomination Tuesday morning. It is one of five confirmation hearings senators have scheduled on the day before Mr. Biden is inaugurated.

The government's third largest department, created after the 9/11 terrorist attacks, handles issues ranging from counter-terrorism and border security to immigration policy and disaster management. If confirmed, Mayorkas, the son of Cuban immigrants, would take the helm of a highly politicized 240,000-person agency that has seen a succession of temporary leaders during the Trump administration — six in four years – two Senate-confirmed, four acting.

Gil Kerlikowske, a former head of U.S. Customs and Border Protection (CBP) who worked with Mayorkas during the Obama administration, described him as a straightforward "known quantity" at the agency.

"He can be very direct when necessary, particularly during those fraught days," Kerlikowske told CBS News, reflecting on the 2014 flow of unaccompanied minors and families from Central America seeking to enter the U.S. at the Mexican border.

Mayorkas would also inherit challenges inside the U.S., particularly the rise of domestic terrorism and anti-government militia groups, on display during the Capitol riot. 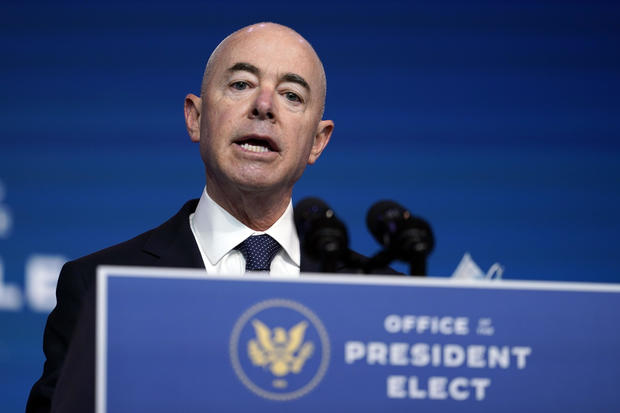 "The president-elect could not have found a more qualified person to be the next homeland security secretary," wrote Tom Ridge, Michael Chertoff, Janet Napolitano and Jeh Johnson. "Mayorkas needs no on-the-job training and will be prepared to lead DHS on Day 1."

And while the former federal prosecutor appears likely to be approved by a simple majority as the Biden administration applies pressure on lawmakers to greenlight its national security team, it is unclear how long the process will take. Democrats will soon assume control of the Senate, but with a razor-thin majority.

Mayorkas is expected to face challenges from GOP senators, which could delay his confirmation. Republicans have expressed concerns over a 2015 inspector general's report alleging that Mayorkas tilted the scales on behalf of well-connected Democrats applying for a program for wealthy immigrant investors when he served as director of the U.S. Citizenship and Immigration Services (USCIS).

Mayorkas would likely play a key role in Mr. Biden's plans to reverse many of Mr. Trump's immigration changes, which collectively restricted avenues for people to immigrate to and stay in the U.S.

Mr. Biden, for example, has pledged to safeguard the Deferred Action for Childhood Arrivals (DACA) initiative, a program for undocumented immigrants brought to the U.S. as children that Mayorkas implemented in 2012. Mayorkas, the son of Jewish refugees who fled Nazi Germany and then communist Cuba, will also be charged with helping to fulfill Mr. Biden's pledge to dramatically increase refugee admissions, which Mr. Trump slashed to historic lows.

But the task at the U.S.-Mexico border would be formidable: reversing Mr. Trump's restrictive asylum policies without triggering a sharp increase in unauthorized migration, which could provide political ammunition for Republicans and derail Mr. Biden's immigration reform bill.

Mr. Biden and his immigration advisers say they want to avert a border crisis but warn that their plans to reverse Mr. Trump's asylum policies will take time amid the pandemic.

Biden transition officials pledged last month to immediately start reviewing asylum cases of the most vulnerable migrants at the southern border. Advocates still intend to keep up the pressure to ensure that Mr. Trump's obstacles to humanitarian protections are dismantled.

"It would be unrealistic to expect that all of the problems that came from the Trump administration and before to be undone in a single day," said Kennji Kizuka, a senior researcher for Human Rights First, "but the incoming administration has the legal obligation to follow U.S. law and treaty obligations that the U.S. has taken on to protect refugees."

But a challenge enveloping all of DHS will be re-establishing trust in the sprawling agency.

And Kerlikowske, the ex-CBP head said, "The public trust issue is pretty tough right now in law enforcement generally. But when you look at (U.S. Immigration and Customs Enforcement) or CBP, I think it's even more critical right now."

A Newspaper Casino? Toronto Star Company Is Getting Into The Online Gaming Business

Only 1 family member from Floyd, Chauvin families to be allowed in courtroom

Biden Says U.S. Will Have Vaccine Supply For All Adults By May, Prioritizes Teachers

US Sanctions Russians for Role in Navalny Attack

Why I Said No to Being Called CEO

Mitch McConnell laughs off Trump taking credit for his reelection

U.S. Will Have Enough COVID-19 Vaccines for All Adults by End of May, Biden Says

New report lists worst states for kids during the pandemic

Dolly Parton gets Covid-19 vaccine, jokes she got a 'dose of her own medicine"

Biden: US will have enough COVID vaccines for every adult by the ‘end of May’

'The View' host: Maybe Democrats should 'ignore everything' about Andrew Cuomo harassment allegations

Cuomo to be stripped of pandemic powers amid sex harass, nursing home scandals

Sutter to cancel up to 95,000 vaccine appointments in Northern California

Dr. Oz Helps Save Man Who Collapsed at Newark Airport

How does guaranteed life insurance work?

Hugh Grant To Play Villain in Paramount And eOne’s Untitled ‘Dungeons & Dragons’ Pic; ‘It’ Star Sophia Lillis Also On Board

Joe Biden Says U.S. Will Have Enough Vaccines For All Adults By End Of May

Even Keith Morrison Is Shocked By the Lori Vallow Podcast Revelations

Baseball to return to Nationals Park — but without fans, for now

Braves’ Freeman celebrates his new baby ‘twins with a twist’

Texas and other states ease COVID-19 rules despite warnings

From Britney to Buffy, We’re Suddenly Rethinking Postfeminist Pop Culture—and Nothing Could Be Healthier

Will Smith says he might step into politics one day

US efforts to force Google, Facebook to pay for news gains steam

Biden: US will be able to vaccinate all adults by end of May

Johnson & Johnson Covid-19 vaccine given to first patients in Ohio

Tyson Foods To Offer COVID Vaccines To Thousands Of Its Workers