A coalition of 27 major companies including Mastercard, Goldman Sachs and Verizon has pledged to hire 100,000 low-income and Black, Latino and Asian workers in New York City over the next 10 years, part of a broader push by corporate America to expand economic opportunities to marginalized communities.

The companies are funding the creation of a nonprofit organization, the New York Jobs C.E.O. Council, which they say will work with universities, the city government and other nonprofit groups to prepare a new generation of New Yorkers for high-paying jobs at some of the country’s biggest companies.

Details are scant, but the initiative has attracted the support of many of the most powerful chief executives in the country, including Jeff Bezos of Amazon, Laurence D. Fink of BlackRock, Satya Nadella of Microsoft and Sundar Pichai of Google.

“We started with the C.E.O.s for a very specific reason,” said Gail O. Mellow, who will run the new council and most recently served as president of LaGuardia Community College. “We wanted that buy in.”

Those involved with the new group say it will work to develop programs intended to prepare low-income and minority students for jobs at the companies.

The effort began to take shape before the pandemic, but “Covid has given it a different sense of urgency,” Mr. Rodríguez said. 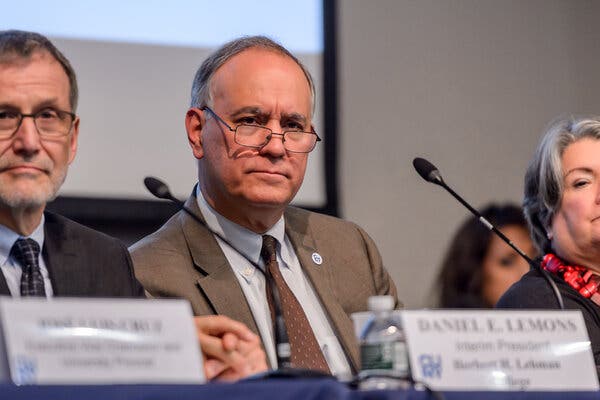 Even as New York City has successfully fought back from the height of the pandemic, when hospitals were overcrowded and hundreds were dying of the virus every day, the city’s economy has yet to recover from the sudden shutdown and continued social-distancing restrictions due to the outbreak.

The city is in the middle of its worst economic crisis since the 1970s, when it nearly went bankrupt. Though officials have allowed a gradual reopening, the city’s unemployment rate climbed above 20 percent in June — the highest level in the 44 years that such data has been collected. A recent report also suggested that roughly one-third of the city’s small businesses may never reopen. The city’s small-business sector had already lost about 520,000 jobs, the study said.

The companies in the nonprofit effort said they aimed to hire 25,000 CUNY students over the next decade. But it was not clear exactly what programs would be developed or how much money would be spent on the effort.

Nor did the group provide a basis for comparison. While the companies have pledged to expand their hiring of low-income and minority New Yorkers, most of the companies already have major presences in the city, so it was unclear how much of an increase their commitments represented.

“I think it’s presumptuous of us to be prescriptive and say, ‘This is what we’re going to do,’” Ms. Mellow said. “We’re going to be very action oriented. It’s going to have multiple brains. We’re going to set up some programs fast. This is a really hard nut to crack.”

Jamie Dimon, chief executive of JPMorgan Chase, said the hope was that announcing the initiative at an early stage would inspire other companies to join. “The C.E.O.s have agreed to attack the problem, specifically, deliberately and publicly,” he said in an interview. “This is so critical to the basic health of America.”

Jamie Dimon of JPMorgan Chase said the council was being announced at an early stage in the hope of attracting more companies.Credit...Shannon Stapleton/Reuters

The New York Times Company is among those that have signed on to the effort.

Mr. Dimon added that even for entry-level jobs at JPMorgan Chase, people needed to possess a range of technological and professional skills.

“Even to be a teller at a bank you have to learn a lot of systems and compliance and regulations,” he said.

By creating more apprenticeships and curriculums, Mr. Dimon said, the program will give more low-income and minority New Yorkers a chance at the middle class.

“That first job brings dignity,” he said. “It’s that first rung in the ladder.”

Liverpool and PSG offered contracts to Alaba, but the player chose Real Madrid. He dreamed of playing for Madrid
I believe in Zlatan. Ibrahimovic asked about Milan's chances of winning the Scudetto
Man City have yet to offer Aguero and Fernandinho contract extensions
Frank Lampard: Chelsea do not have Hazard, who accounted for 50% of goals and assists, and Diego Costa with 30 goals for the season
Let See ten Mangalica and we win the Champions League. The Milan newcomer was a nightmare for Messi, quarreled with Pep and was a favorite of Allegri
Real Madrid can sign Aguero, Giroud or Milik after Jovic's departure
Chelsea spent the most in Europe on transfers in 2020. Manchester United - 2nd, Man City-3rd
Source https://www.nytimes.com/2020/08/10/business/coronavirus-new-york-city-minority-workers.html