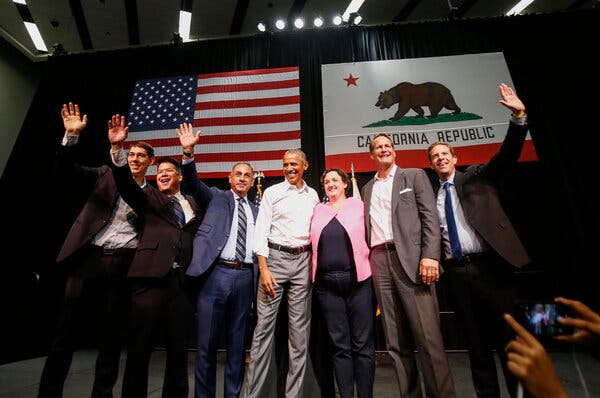 President Barack Obama in 2018 with, from left, Josh Harder, T.J. Cox, Gil Cisneros, Katie Porter, Harley Rouda and Mike Levin, all congressional candidates at the time. They all won, but are being challenged again. Credit...Ringo H.W. Chiu/Associated Press

On Tuesday, we sent you a refresher on what’s at stake in some of the key statewide ballot propositions. Today, we have a guide to other contests to watch:

District 21: The challenger is David Valadao, a Republican running for office in a part of California that has long been the deep red heart of a blue state. But don’t expect to see Mr. Valadao invoking the president as he wages a tough, personal campaign to win back the Central Valley House seat he narrowly lost in 2018 to Representative T.J. Cox. Instead, Mr. Valadao, a dairy farmer from Hanford, has been portraying himself as a moderate option who can bridge partisan divides, while slamming his opponent as a Bay Area-style liberal who’s out of touch with the needs of constituents in an agricultural economy.

Mr. Cox has countered with a bruising campaign tying his challenger to President Trump and the House minority leader, Kevin McCarthy, the Republican from the neighboring district who has been a reliable supporter of the president.

Republicans hope that if Mr. Valadao can retake the district — which favored Hillary Clinton in the 2016 presidential election and is one of the nation’s most heavily Latino — it might show a way forward for a political party whose influence in the state has slid in the past four years. In the March primary, Mr. Valadao led the field with about 50 percent of the vote, while Mr. Cox earned 38.6 percent. But experts say it’s a tossup.

District 25: The voters of this suburban district north of Los Angeles have had something of a roller coaster year. The Democratic newcomer Katie Hill won the seat in 2018 as part of the state’s “blue wave.” But her resignation a year ago reopened the field to a wide range of contenders, including Ms. Hill’s predecessor, the Republican Steve Knight, and the progressive talk show host Cenk Uygur, who was at one point endorsed by Senator Bernie Sanders before the endorsement was retracted amid an outcry over offensive comments Mr. Uygur had made previously.

In a May special election, though, Mike Garcia, a Republican and former military pilot, easily beat Christy Smith, a Democratic member of the State Assembly, making it the first time the G.O.P. has flipped a Democrat-held seat in California since the last millennium. That was just temporary, though. The two are now fighting a rematch, and it’s looking like a tight race.

District 48: For years, this coastal Orange County district was dominated by the Republican Dana Rohrabacher, who was closely allied with President Trump and had been called “Putin’s favorite congressman.” In 2018, though, a former Republican from Laguna Beach, Harley Rouda, unseated Mr. Rohrabacher after three decades.

This time around, Republicans are pinning their hopes on Michelle Steel, the chair of the powerful Orange County board of supervisors who has served as an adviser to the president on Asian-American issues. Mr. Rouda has blamed Ms. Steel for exacerbating the coronavirus pandemic by undermining the advice of scientists and health experts, and Ms. Steel has accused Mr. Rouda of politicizing a pandemic.

District 50: Unlike the aforementioned House races, this district, in San Diego County, never turned blue. Its Republican representative was Duncan Hunter, who resigned in January after he pleaded guilty to charges that he used his campaign coffer to finance a lavish lifestyle. It was the end of a decades-long dynasty in the district; Mr. Hunter succeeded his father.

[See The Times’s full voter guide for Californians, with information about how, when and where to cast your ballot. | Leer en español.]

Los Angeles district attorney: This summer was defined by widespread protests against police brutality and racism. But in California, debates over how to police the police were already well underway. For years, Black Lives Matter activists in Los Angeles have slammed District Attorney Jackie Lacey for failing to prosecute police officers who have killed people on the job. Now, she’s facing a serious challenge from George Gascón, who was until recently San Francisco’s district attorney and has pitched himself as a progressive reformer.

San Diego mayor: The race to become mayor of California’s second largest city is notable for a couple of reasons. First, it’s come down to two Democrats — Todd Gloria, a state assemblyman, and Barbara Bry, a city councilwoman — to replace Mayor Kevin Faulconer, a Republican who will be termed out. Also, the two candidates have similar views on most issues, with one major exception being how they’d tackle the housing crisis. Mr. Gloria said he supported legislation that would allow denser development in single-family neighborhoods. And neither is in the clear lead.

(This article is part of the California Today newsletter. Sign up to get it delivered to your inbox.)

Here’s what else to know today

For the first time in more than three decades, and after years of frustration, the Dodgers won the World Series. Fireworks exploded in the skies over the city and, for the second time in two months, fans of a championship-winning Los Angeles sports team poured into the streets.

Because this is 2020, however, the joy wasn’t totally unmitigated: Right before the Dodgers were given the Commissioner’s Trophy, it was announced that Justin Turner had been pulled from the game because he tested positive for the coronavirus. He was later seen celebrating with teammates and fans.

And according to The Los Angeles Times, officials are blaming viewing parties and celebrations for the Lakers and the Dodgers for potentially spreading the virus.

[email protected]. Were you forwarded this email? Sign up for California Today here and read every edition online here.

Jill Cowan grew up in Orange County, graduated from U.C. Berkeley and has reported all over the state, including the Bay Area, Bakersfield and Los Angeles — but she always wants to see more. Follow along here or on Twitter.

California Today is edited by Julie Bloom, who grew up in Los Angeles and graduated from U.C. Berkeley.

Goodbye, Dad Buba Diop. Thanks to you, I lived the most memorable tournament of my childhood
Nuno about 2:1 with Arsenal: We played amazing, very proud. Jimenez recovered
Arsenal scored 13 points in 10 opening matches - the worst result in 39 years
West Brom can be bought by us investors. The Chinese owner of the club wants 150 million pounds
Lampard on Mourinho's words about ponies: You have Kane, Son, bale and alli. We are all fighting to win the Premier League
Mourinho on winning the Premier League: Tottenham are not in the race, because we are not a horse, but a pony
Laurent Blanc: I will return to football, but in children's. Now coaches are being asked to increase the cost of players, I don't like it
Source https://www.nytimes.com/2020/10/28/us/california-house-races-to-watch.html