Looking at it one way, Audubon Middle School doesn’t need saving — with its energetic principal and a program with much to offer. But steep enrollment declines have left the Leimert Park campus at less than a third of capacity. And students are struggling academically — just 5% are at grade level in math. The two music-industry moguls settled on Audubon as the place to start a new public high school, which will mirror the format of a USC academy that launched in 2013, catalyzed with their $70 million donation. The amount of money for the Audubon project is uncertain, but Iovine and Dr. Dre said they will spend whatever it takes.

“We’re here strictly for the kids and trying to give them a future and something promising that maybe wasn’t available before,” said Dr. Dre, the professional name for the pioneering rapper, producer and music-industry figure born as Andre Young. He and Iovine spoke at Audubon during a Monday news conference with education leaders. 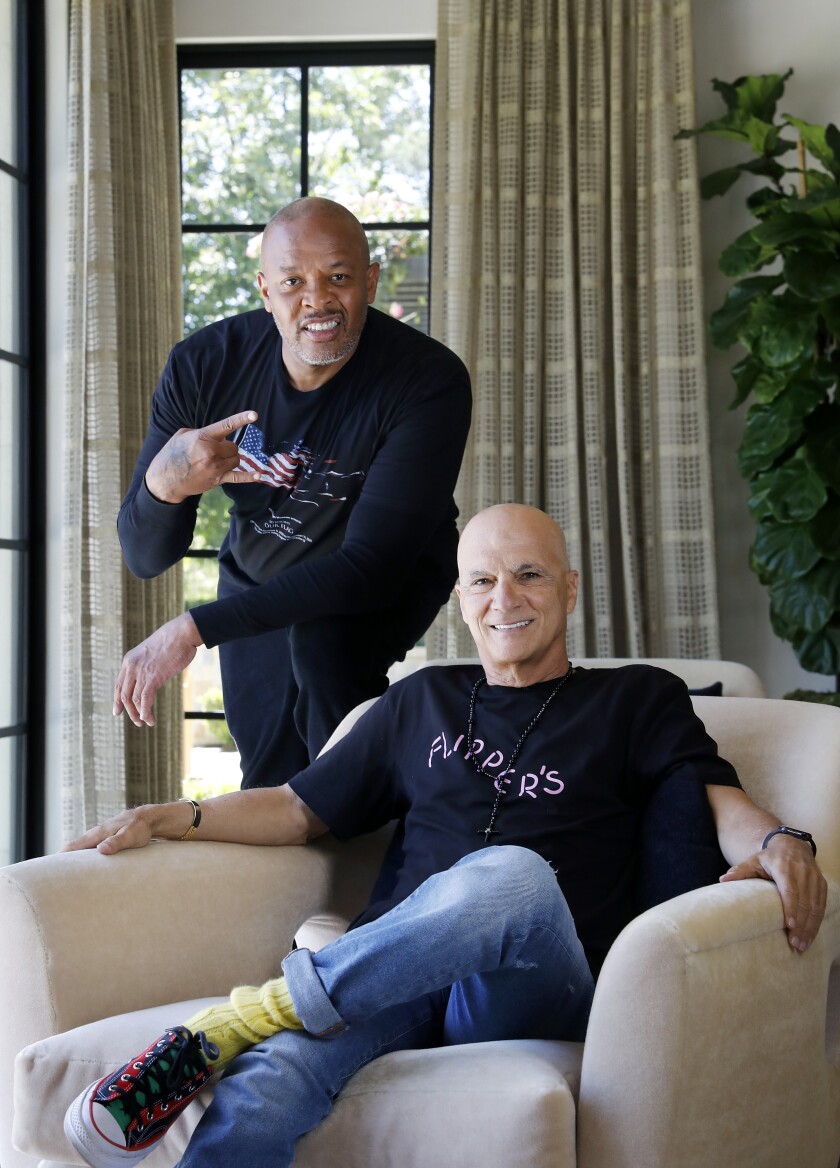 Dr. Dre, left, and Jimmy Iovine considered building a campus from scratch, but moving into existing space is faster. Students will be able to enroll for the fall of 2022.

It all happened quickly, said Audubon Principal Deanna Hardemion, who just concluded her second year leading the school. Dr. Dre and Iovine were looking at campuses to host their high school and had inspected Audubon only within the last few weeks.

The campus had much they liked, fundamentally its location in a low-income community of color. But there were other positives, Hardemion said, including a stand-alone 1920s-era classroom building, with solid architectural bones and sturdy crafted wooden cabinets, as well as a renovated, distinctive auditorium — and plenty of space. Audubon Middle School Principal Deanna Hardemion says the campus has much to offer students, including classes on music and film production.

Audubon enrolls about 460 sixth- through eighth-grade students on a campus that can easily accommodate 1,500. In peak enrollment years, around 2002, the school had more than 2,300 students.

But over time, many Black middle-class families have sent their children to charter schools or Los Angeles district schools on the Westside. Decreased immigration, lower birth rates and gentrification also played a role.

For now, that classic classroom building has been provided to an independently operated charter school, which soon might have to find another location.

The new project is not a music school, but intended as an incubator of entrepreneurial and silo-busting talent, where students will learn to work in teams to address real-world challenges. A university-level prototype exists at USC, where students have tackled projects presented to them by medical centers, private companies and, for example, the Grammy Foundation — a tie-in with music that is not elemental to the student experience. The facilities at Audubon Middle School include a gym renovated with the help of NBA star James Harden, who attended the school.

Audubon has much to offer, Hardemion said, including an elective in music production, where students craft their own beats and songs. There’s also a film production class. And more than a fourth of students are part of a gifted and high-ability magnet at the campus’ School for Advanced Studies. There’s also a nicely outfitted dance studio, renovated outdoor recreation areas and a sparkling gym — refurbished with the help of basketball star James Harden, who went to the school, the principal said.

The new high school won’t add to Audubon’s enrollment and will bear a different name, but it will give Audubon students a new option upon matriculation — and the sudden, intense public attention also could inspire families to give the middle school a closer or second look.

Hardemion sees an opportunity to highlight positive aspects of the school, where Black students make up about 57% of enrollment and Latino students, 40%. 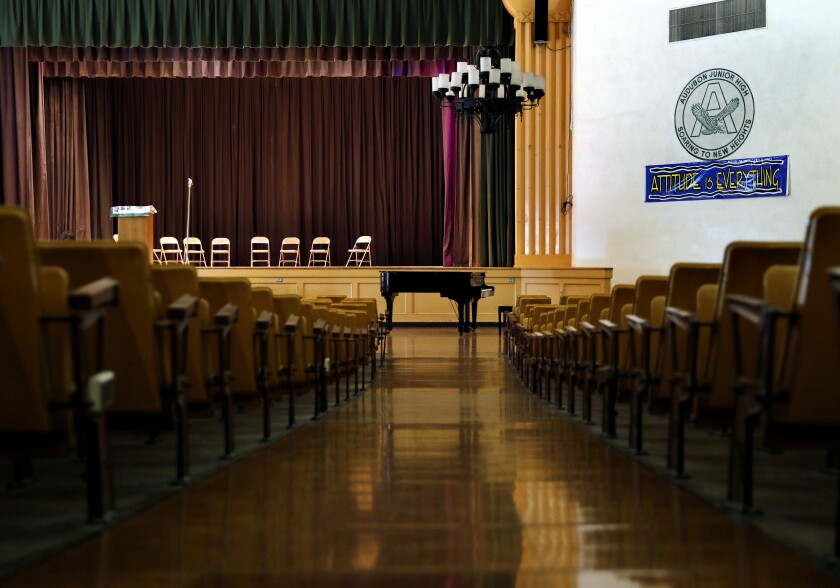 At its peak, Audubon Middle school had about 2,300 students. Today, it enrolls about 460.

Its children face struggles on and off campus. About 9 in 10 qualify for a meal subsidy because of low family income. On state tests given in spring 2019, 15% of students met or exceeded state academic standards in English, 5% in math.

Dr. Dre and Iovine considered building a campus from scratch, but moving into existing space is faster; students will be able to enroll for the fall of 2022.

“I think it’s going to be something extremely different,” Dr. Dre said. “And I’m still trying to learn myself and understand the politics and the hurdles that we have to get over to help.”

Dr. Dre spoke briefly at Audubon on Monday, taking part in a news conference with education leaders and Iovine, who rose from recording session engineer to co-founder of Interscope Records in 1990. He and Dr. Dre are longtime collaborators and business partners, known for discovering and mentoring musical talent.

L.A. schools Supt. Austin Beutner said the anticipated funding and support from the two would take the start-up high school from solid to state of the art.

Even with a year to plan, the project came together quickly by the bureaucratic standards of the nation’s second-largest school system. Beutner simply did not want to say no to the benefactors — or erect roadblocks that could push them elsewhere.

But many things remain to figure out, including the application process. At last week’s board meeting, staff suggested that applicants would have to write an essay and submit a video, which would be evaluated as a special prequalification in the regular magnet-school application process.

As with other magnets, if a program is oversubscribed, students are accepted based on a complicated point system, including, for example, whether a student’s ethnicity would promote integration or whether a neighborhood school is overcrowded.

For most magnets, a student’s aptitude is irrelevant, although a parent’s ability to navigate the point system could be a factor.

As with other magnets, the district will provide free transportation to and from school for students who live outside a certain radius.

At the Monday event, Erica Muhl, the outgoing and founding dean of the USC program, made it clear that the application process should not itself be a barrier.

“Any review process... is really going to be with the goal of helping us identify the precise needs — also passions and desires — of the individual students, because it helps us as educators to be able to understand how we can tailor what we do for them,” she said.

Iovine and Dr. Dre said they want to reach students who, like them, felt disconnected from, unmotivated by, the typical school experience. They beat the odds to become successful. They want incoming generations to have better odds.