Chump Élysée: How DSK Lost the French Presidency in a New York Bedroom

The “great man theory,” as college undergraduates of a bygone era used to be taught, holds that history’s most important moments and institutions are shaped by heroic figures who show up at exactly the right time, and impose their will indelibly upon events.

In this view, Western civilization is a relay race run by white men, with the baton being passed from Alexander the Great to Julius Caesar, and so on down the line to George Washington, Winston Churchill, and et cetera.

Long discredited, the theory is at least interesting in that it suggests the racetrack of glory also has a gutter alongside, ready to collect those who stumble. One man’s seemingly assured road to the White House takes a wrong turn on a Chappaquiddick bridge, for example, or a king falls in love infelicitously and is forced into exile. For another striver, once seen as an all but inevitable president of the French Republic, his path to the Élysée Palace ended in a New York hotel room.

Dominique Strauss-Kahn was born in 1949 in the affluent Paris suburb of Neuilly-sur-Seine, a leafy neighborhood of old money and the kind of place where cartoonists might depict snooty poodles turning up their noses at lesser canines. Despite an upholstered upbringing as the son of a lawyer, whose practice took the family to Morocco and Monaco, DSK (as he became universally known) was a student communist, setting him on course for a successful career in the Socialist Party.

Pictures of a young DSK show a thickly built man with a fashion sense that could only be described as bureaucratic. Yet he was blessed with a smile that could make an otherwise ordinary face handsome, his charisma was legendary, and he absolutely killed it with the ladies. Starting with a first marriage at the age of 18, he had four wives, countless affairs, and children on both sides of the blanket. Along the way, one French newspaper would forgivingly dub him “le grand séducteur” — the Great Seducer. The women who alleged he abused them, however, would probably phrase it differently.

DSK’s political rise in the 1980s and ’90s included stints as a mayor and a member of parliament, as well as senior positions in the French cabinet, including minister for economics, finances, and industry. But it was in 2007 when he burst onto the world stage as managing director of the International Monetary Fund, one of the most influential positions in global financial policy. 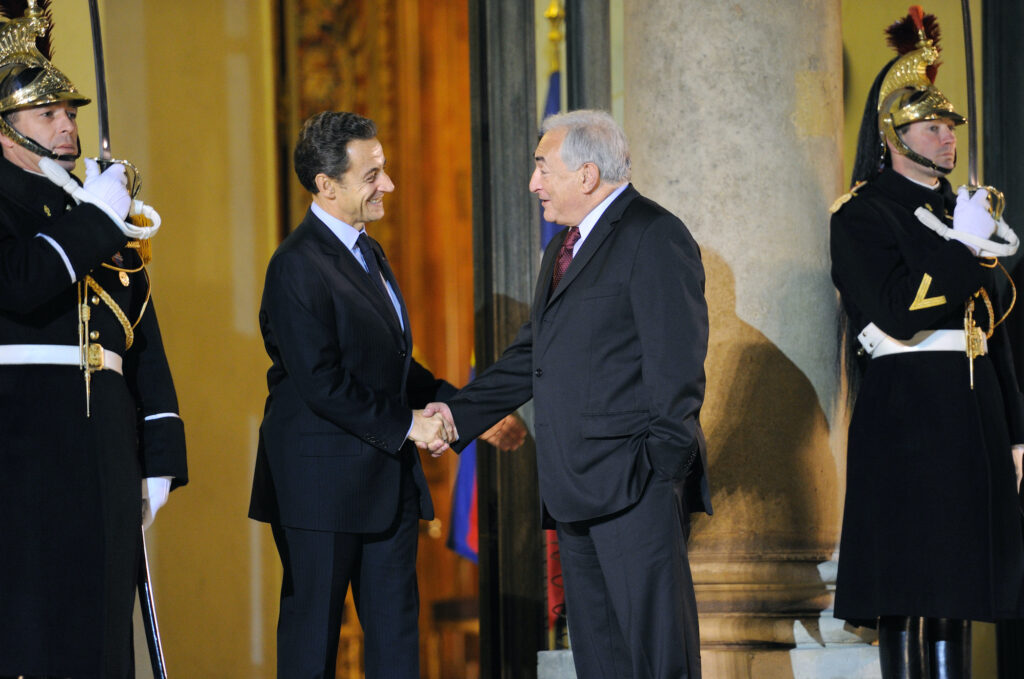 ON THE RISE With then president Nicolas Sarkozy in 2010, a would-be Brutus to his Caesar
Photo by Eric Feferberg/AFP/Getty Images

Ironically, he was put forward for the position by then president Nicolas Sarkozy, an ideological adversary and member of the rival UMP party. At the time, many believed Sarkozy was bumping DSK into the IMF to get rid of the man who was considered to be his most plausible competition for the presidency.

Nonetheless, DSK thrived in the role. His Wikipedia page (which reads like it has been carefully combed by a public relations team) lists some of the plaudits he received as being like “Metternich with a BlackBerry,” “effective and skillful,” and a “sagacious leader.”

Such hot air may have inflated his head to the point where he floated through the corridors, but it didn’t keep his fly up. A married subordinate claimed she was coerced into an affair, and although she was later fired, the pliant IMF board cleared him of the most serious charges (including harassment and abuse of power) and kept him in the role.

Even those patsies, however, couldn’t look past what happened next.

In the spring of 2011, DSK checked into suite 2806 of the Sofitel Hotel in Midtown. What is not in contention is that on May 14, he had a sexual encounter with a hotel chambermaid, Nafissatou Diallo. Hours later, he was removed by Port Authority police from the first-class section of an Air France flight just minutes before it was to take off from JFK, bound for Paris. And he resigned from the IMF four days later, on May 18.

Beyond that, everything is in dispute.

Diallo, who had DSK’s DNA on her, claimed she had been sexually assaulted; he said the encounter was consensual. In the ensuing media circus — with the disgraced former IMF chief being transferred first to a Harlem police cell, and later to house arrest in a Tribeca townhouse — Diallo and DSK sued each other, with the New York Post taking his side and positioning the whole thing as a shakedown .

The case against him spectacularly collapsed in August, when prosecutors filed a motion to dismiss all charges, citing inconsistencies in Diallo’s story. One of DSK’s lawyers, Ben Brafman, told reporters outside the State Supreme Court in lower Manhattan immediately afterward: “You can engage in inappropriate behavior, perhaps, but that is much different than a crime.” 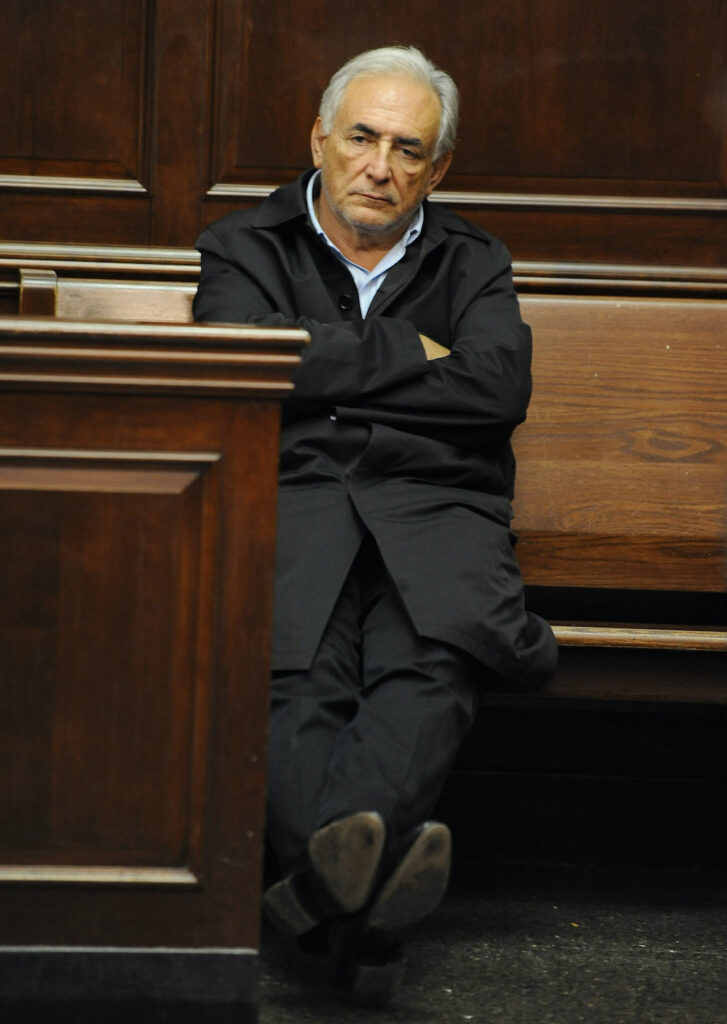 Diallo’s many supporters called the decision a travesty, and the two quietly settled a civil suit for an amount French media later reported to be $1.5 million.

In the wake of the case, several other unsavory accusations were made against the fallen titan, including that he attended sex parties with prostitutes, and one attempted rape. French authorities charged him with “aggravated pimping” relating to an incident at the Hotel Carlton in Lille, but he was acquitted. (He admitted taking part in group sex, but denied knowing his partners were on the clock at the time.)

Even for the sexually liberal French, however, this behavior was too much. Widely expected to successfully challenge Sarkozy in the 2012 presidential election, DSK instead went into the political wilderness. “By all accounts he was considered pretty much a shoo-in for top job in the country, given how unpopular Sarkozy was at the time,” wrote The Local, an English-language French news outlet. It noted a newspaper opinion poll which found “79% of the public believe DSK would have made a better president than François Hollande,” who was elected instead.

If DSK has shed any tears over his fate, at least he can dry them with the wads of cash he has made since being forcibly diverted into the private sector. In the last decade he has consulted for the Serbian and South Sudanese governments, flirted with investment banking, and serves on the board of the Russian Regional Development Bank, a subsidiary of Rosneft, a powerful state oil company.

If he picked up any Russian during his days as a student communist, no doubt it has come in handy.

Carlo Ancelotti: Hazard is not at the level that we would like to see. It is not easy for him to play 2 matches in a row
Laporte was offered to sell Fati in the summer to register Messi. The president of Barca refused
Ronald Koeman: I wanted to go to Barca, but I didn't expect such problems. I am struggling and I do not regret that I came
Ronaldo got into the start of Manchester United in all 3 games after the transfer. He will play with West Ham from the first minutes
Golovin scored for the first time this season in Ligue 1, making an effective action in the 2nd game in a row
Messi and his family can move to a castle near Paris. The building is estimated at 48 million euros
Varan about Ronaldo: The best example of a winning mentality in the world. He works admirably