Last December, Oregon lawmaker Mike Nearman was meeting with activists unhappy with the state’s pandemic lockdown. He shared their sentiments and thought he’d do something to show solidarity. So he presented them with a scenario.

Supposing, Nearman told them, someone was hoping to breach the state Capitol, which has been closed to the public for over a year. Let’s say you called a certain cellphone number — his — and told Nearman you were standing just outside the building at a certain entrance.

“We are talking about setting up Operation Hall Pass,” he said, giving out his number. Of course, it was not as though — wink, wink — Nearman was actually telling folks to show up at the statehouse, knowing he would let them inside. If anyone suggested as much, he said in remarks later revealed on tape, he would totally deny it. 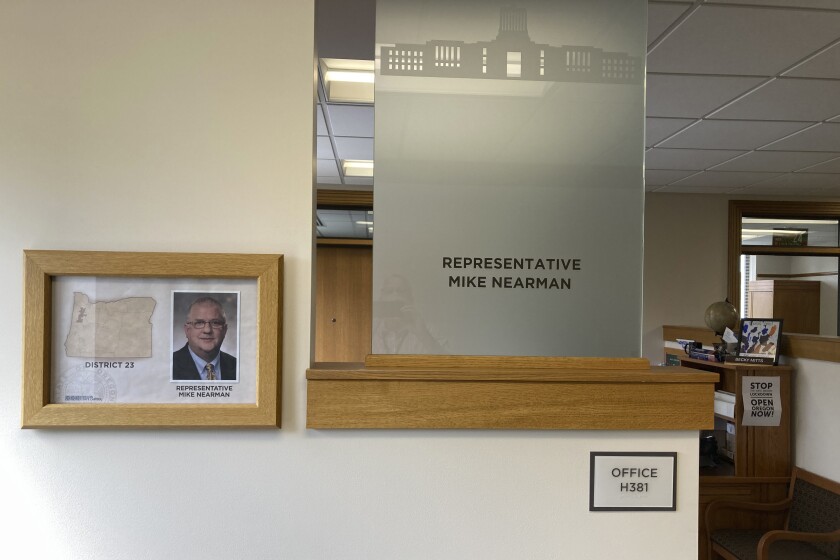 Rep. Mike Nearman has been expelled on a bipartisan 59-1 vote. He cast the sole dissenting vote.

You can guess what happened a few days later.

Nearman slipped out of the House chamber while lawmakers were meeting in a special session and opened a door for two protesters who beckoned others to join them inside the Capitol.

The result was thousands of dollars in damage and injuries to six police officers.

Petitioning one’s government is all well and good. But this was something different, as Democratic Rep. Anna Williams observed on Twitter.

“On December 21st, a man with a bullhorn was standing below my office window shouting, ‘We’re coming for you!’ as a group of people carrying semi-automatic weapons was looking into my and my colleagues’ office windows,” she wrote. “Rep. Mike Nearman invited them into the Capitol.”

Last week, Nearman became the first sitting lawmaker in Oregon history to be expelled from the House. The vote was not only bipartisan but nearly unanimous, 59-1. The sole dissenter was Nearman. “The people of the state of Oregon have the right to instruct their [legislators] and the deliberations of this body are open,” he told colleagues, managing to sound both sanctimonious and obtuse at the same time. “It says so right in the Oregon constitution.”

He was a victim of mob justice, the self-pitying Newman went on — making a plea for sympathy akin to an arsonist expressing outrage his shoes were dampened by firefighters.

Twenty-two of his fellow Republicans said nothing in Nearman’s defense.

The violence, it turned out, was a prelude to the deadly assault on the U.S. Capitol just over two weeks later.

However, the response — GOP lawmakers joining Democrats in holding Nearman accountable — stands in striking contrast with the way Republicans in Washington have attempted to stuff Jan. 6 down a memory hole.

Efforts to create a bipartisan commission to investigate the insurrection — like the ones after the bombing of Pearl Harbor, the assassination of President Kennedy, the Sept. 11 terrorist attacks — were thwarted because, well, it might hurt the GOP’s prospects in the November 2022 midterm election.

So much for that stuff about putting country over party.

In Oregon, Nearman came under suspicion when a security camera caught him exiting the building and leaving a door ajar just long enough for a demonstrator to grab hold and step inside. He was stripped of his committee assignments and the House Republican leader, Christine Drazan, joined calls for a criminal investigation.

Then, earlier this month, Oregon Public Broadcasting published the video of Nearman, who represents a rural area outside the capital, Salem, offering his thinly veiled invitation for malcontents to invade the statehouse. He mused over the difficulty of drawing a sufficient-sized mob during the week — “people that are responsible citizens have jobs” — rather than a weekend, but ended up suggesting “you got one crack at it” on the Monday that lawmakers were meeting.

Republicans quickly turned on Nearman — one GOP colleague said he flat-out lied about the existence of further evidence tying him to the attack — and many called for his resignation before voting in favor of expulsion.

“It was the clarity of it,” Jim Moore, who teaches political science at Oregon’s Pacific University, said of the incriminating video.

He also noted that Nearman’s removal had no effect on control of the House, where Democrats hold a nearly 2-to-1 majority, a contrast with the near-even partisan split on Capitol Hill. That might have made it an easier vote for Republicans. But leaving cynicism aside, GOP lawmakers apparently agreed, as Moore put it, that “certain behaviors are beyond the pale, and you need to punish those.”

State legislators have long fancied their capitols to be “laboratories of democracy,” as Supreme Court Justice Louis Brandeis famously put it, a place where ideas are tested and refined and fashioned into laws that eventually multiply and are replicated across the country.

In this case, Oregon’s GOP lawmakers have set a worthy example. They chose to severely punish dumb and dangerous behavior, a notable contrast with Republicans in Washington who voted to oust one of their top leaders, Liz Cheney, for telling the truth about President Trump’s role in helping spark the Capitol Hill riot and persistently lying about the November election.

Nearman’s plan to let people into Oregon’s Capitol “ended with violence, property destruction and injured cops,” said Drazan, the House GOP leader. “This disregard for the rule of law leads us deeper into civil unrest and division. If we want to turn our state around we must hold ourselves accountable to a higher standard as we work to lead and serve the greater good.”

Expelling a legislator for deliberately putting the safety of fellow lawmakers and others at risk seems like a pretty obvious and straightforward thing to do. It’s an exceedingly low bar for acceptable behavior.

The fact such action is at all noteworthy is a sad commentary on today’s reckless political environment.

Sulscher has signed a contract with Manchester United until 2024. There is an option to extend it for another season
Tottenham have loaned goalkeeper Atalanta Gollini with a buyout option
Liverpool offered 100 million euros for Chiesa. Juventus refused (La Repubblica)
Tottenham will sell Alderweireld to Qatar's Al-Duhail for 15.2 million euros
This club helped a young child to dream. Thanks. A farewell letter to Dortmund from Sancho
Bayern showed a new home form. A fifth star appeared above the logo
10 places in Moscow and St. Petersburg that every fan should visit