One year ago — Oct. 24, to be exact — the Los Angeles Philharmonic celebrated its 100th anniversary. The orchestra was on top of the world. Born during a pandemic, it had risen higher over a century than any other. In terms of vision, ambition, budget and outreach, the L.A. Phil had become the orchestra of the future.

Less than six months later, beset by the worst pandemic since the 1918 Spanish flu outbreak, the L.A. Phil was brought to its lowest point.

Even with the best-case outcome — that the L.A. Phil will, by next summer, be able to mount a full Hollywood Bowl season — it will have lost approximately $90 million in projected revenue, what with the cancellation of this year’s spring, summer Bowl and full 2020-21 seasons.

Every orchestra on earth, of course, has been affected by the coronavirus. Most have put on a brave face along with face masks and tried in some way or another to act as if there could be a semblance of continuation. But in the first months of the pandemic the L.A. Phil publicly demonstrated little leadership. One minute it was in the midst of a revolutionary and radically prescient “Power to the People” festival; the next minute, the power was summarily turned off.

At the orchestra’s last full concert, a Sunday matinee at Walt Disney Concert Hall on March 8, Gustavo Dudamel conducted an inspiring performance of Duke Ellington’s “Three Black Kings,” with MLK being the final King. Before long America would begin a profound reckoning with African American neglect. A tepid virtual classical-music tiptoeing through the coronavirus seemed inadequate to the moment and to the orchestra’s mission.

It may appear counterintuitive given more than a half-century of such media-maven music directors as Zubin Mehta, André Previn, Esa-Pekka Salonen and Gustavo Dudamel, yet live events and the physical spaces in which they occur inspired the L.A. Phil’s greatest advances and innovations. The orchestra is inseparable from its venues, Walt Disney Concert Hall and the Hollywood Bowl, and that is about to expand to the new YOLA venue in Inglewood that Frank Gehry has designed for the orchestra’s youth orchestra and education program. On the other hand, a great many of the orchestra’s media experiments, especially broadcasts of concerts in movie theaters and attempts to bring visual display into Disney, failed to make a lasting impression.

But during the past seven concert-free months, the L.A. Phil has, in fact, tested every traditional medium for music: radio, television, CD, streaming video, DVD/Blu-ray and even vinyl. Each in its own way reminds us of what we’re missing. But each also adds a dimension. Blessings are very much mixed.

Perhaps the biggest surprise is how old media retains its efficacy, and none more so than in the dazzling analog recordings that Mehta made for the British Decca label with the orchestra between 1967 and 1977 at Royce Hall. The recorded sound was meant to knock your socks off. Remastered and collected into a new 41-CD box set, the discs, packaged in miniatures of their original jackets, still do.

These recordings, which came out on LP on the London label in this country, were responsible for the L.A. Phil gaining a reputation for glitz. Mehta’s repertory focused on late 19th century and 20th century showpieces — Bruckner, Mahler and Tchaikovsky symphonies, Strauss tone poems. “The Rite of Spring,” “The Planets,” pieces by Varèse and, of course, “Star Wars” had one thing in mind: to dazzle.

Hi-fi addicts gobbled them up. Sophisticates scoffed. The L.A. Times couldn’t have been more dismissive.

A little of Mehta’s relentless pizzazz goes a long way (it took me a couple of months to work through the set), but the performances extol a fabulously fortifying sense of optimism. There is not merely a sense of immediacy in these sound spectaculars but also real relevance.

Most startling of all is the recording of William Kraft’s “Contextures: Riots — Decade ’60.” Commissioned by the orchestra to contextualize the civil rights and Vietnam War uprisings in Los Angeles, the score was given its premiere on April 4, the day of Martin Luther King Jr.’s assassination. When the news reached Kraft, the orchestra’s principal percussionist, he instantly inserted a reference to “We Shall Overcome” at the end.

At the other extreme, which isn’t so much of an extreme, really, Deutsche Grammophon has just released “Must the Devil Have all the Good Tunes” on vinyl. The live recording of the performance of John Adams’ new piano concerto, written for Yuja Wang as soloist and Dudamel conducting, first came out as a download in April. But gritty, jazzy (not so unlike “Contextures”), it is a score made for LP. The download, heard in hi-res, has an openness that approximates the acoustic of Disney Hall, as though you are sort of there but not really. The vinyl makes no such pretensions, the satisfyingly rich, plummy quality of recorded music being an art form of its own. Also, the disc includes liner notes. The two most notable events of the events of the orchestra’s cut-short season were Dudamel’s cycle of Charles Ives’ four symphonies and the 100th-anniversary gala in which Mehta, Salonen and Dudamel all participated. The Ives symphonies are a strong addition to the catalog, the best overall of all recorded cycles. But it remains a document. The Fourth Symphony, one of Dudamel’s most impressive achievements, was a surround-sound experience that can’t help but lose something in recorded translation, no matter how many hundreds of thousands of dollars you spend on loudspeakers.

The same was true for the premiere of Daniél Bjarnason’s “From Space I Saw Earth” for three orchestras and three conductors, which the L.A. Phil commissioned for its centennial birthday gala. That concert was broadcast on PBS and is now available on home video. It is heartwarming to watch Mehta, Salonen and Dudamel, each a generation apart, each a virtuoso conductor and each from distant parts of the Earth (Mumbai, Helsinki, Caracas, respectively), bring an individual style to which the orchestra immediately, impeccably and joyously reacts. No other major orchestra I know of looks so happy on camera.

There is considerable pleasure to be had here, including apprehension of details in performances impossible to catch in the audience. But the viewer always remains an outsider. Voyeurs we further remain in the orchestra’s attempts to connect via radio, TV and streaming. To its credit, though, the L.A. Phil has found means for retaining its personality in each.

Springtime, with everyone locked down, KUSC brought us Brian Lauritzen’s reassuring weekly chats and playlists by Dudamel, Salonen and other members of the L.A. Phil family when we needed to know that everyone was OK. Come summer, PBS presented weekly trips down Hollywood Bowl memory lane, around themes such as Mexican music, Broadway, jazz, etc.

For fall, the L.A. Phil made its most substantial effort to connect through weekly streams of half-hour concerts shot on the stage of an otherwise empty Hollywood Bowl. This is something new. Rather than mimic a concert, the point of view is that you are not there, nor can you be there. The string musicians wear masks. Wind and brass play behind plastic shields. The orchestra is reduced in size, with revolving players, and everyone is distanced. 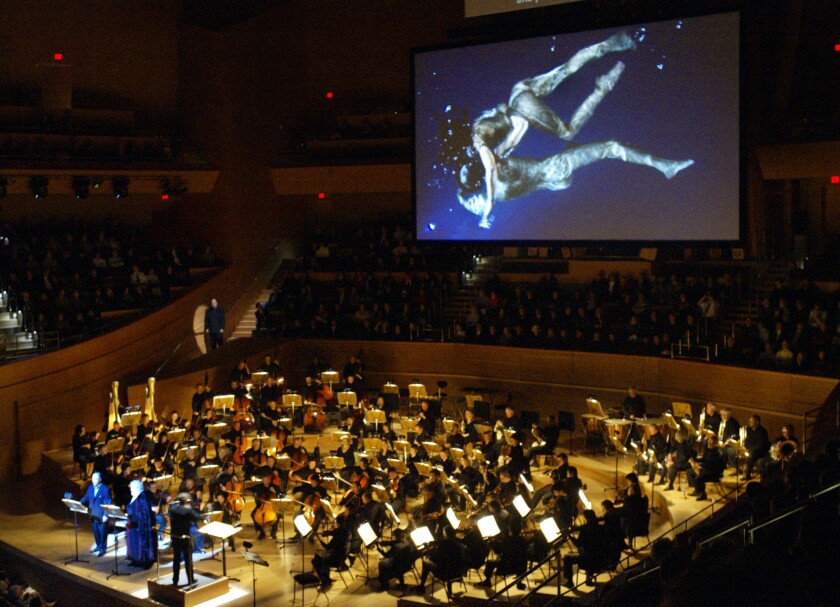 Esa-Pekka Salonen conducts the second act of “The Tristan Project” with the Los Angeles Philharmonic and video by Bill Viola at Walt Disney Concert Hall.

Again, each program has a theme, a Latin accent on the first two, a Black one for the third and fourth. So far, the results have been hit and miss. Production values are high. Loving shots of the Bowl and L.A. from the air, and jumpy MTV-style music video of the orchestra or soloists, are less about listening than looking. That means a harpist’s fingernail, a bassoonist’s lips, Dudamel’s hair follicles. The fourth program was devoted to jazz singer Andra Day and her band. The fifth program, not available for advance viewing, is the first to offer a full symphony — Beethoven’s Seventh. A clip from a future stream with jazz saxophonist Kamasi Washington looks to be the one that works best. The L.A. Phil website, which isn’t the easiest to navigate, offers useful extras.

The trouble is, once on the website, you are tempted to look at what we are missing. November was to have begun with a return of “The Tristan Project.” Wagner’s opera with video by Bill Viola and direction by Peter Sellars is still the L.A. Phil’s most impressive multimedia event. Now, if only the L.A. Phil were to find a way to digitize a little of that kind of venturesomeness, Sound/Stage could become Game/Change.

Schurrle and Goetze will invest in a company that produces marijuana for medical purposes
Mircea Lucescu: With Ronaldo, Juventus comes alive. Cristiano has charisma, it is a defining player
Alisson will not play with Ajax due to a hip injury
Varane made the third productive mistake in the Champions League in 2020-the most
The Salzburg defender's career has had crosses and a stroke at 27 - and he's come back every time
A year ago, it had infuriated him that Holand was getting all the attention. Now he is the king of penalties and the main star of Salzburg
Three draws is not the main positive for Loko in the Champions League. All opponents are forced to adapt to Nikolic
Source https://www.latimes.com/entertainment-arts/story/2020-10-25/commentary-the-l-a-phil-quiet-no-more

Stream It Or Skip It: ‘Don’t Listen’ On Netflix, An Extremely Creepy (If Familiar) Spanish-Language Horror Flick

Biden puts economic team on display as transition ramps up

Climate Case Against Shell Begins In The Netherlands