Dak Prescott, Ezekiel Elliott and the defense were on top of their game and pounded the Philadelphia Eagles, 41-21. The blowout victory was a message back at their NFC East rivals after Eagles coach Nick Sirianni wore a "Beat Dallas" T-shirt in the days leading up to the game in an attempt to inspire his team.

The Cowboys turned Sirianni’s fashion choice into bulletin board material.

Prescott was 21-for-26 with 238 passing yards and three touchdowns. He had an earlier turnover in the first quarter but was able to recover to put on a nice performance. 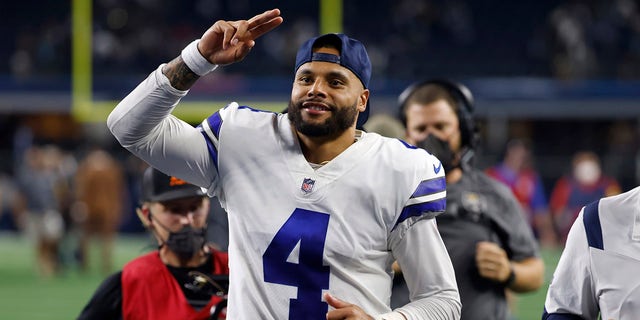 Dallas Cowboys quarterback Dak Prescott (4) acknowledges fans as he jogs off the field after their NFL football game against the Philadelphia Eagles in Arlington, Texas, Monday, Sept. 27, 2021.  (AP Photo/Ron Jenkins)

Elliott, who had been on the receiving end of some criticism over his slow start to the season, had 95 rushing yards on 17 carries with two touchdowns. Dalton Schultz led the team with six catches for 80 yards and two touchdowns. Cedrick Wilson had the other touchdown catch in the game.

Philadelphia quarterback Jalen Hurts had two interceptions in the game – one to Trevon Diggs which was returned for a touchdown and the other was to Anthony Brown. Hurts finished 25-for-39 with 326 passing yards and two touchdown passes.

He had a TD pass to Zach Ertz and another to Greg Ward. Ertz finished with four catches for 53 yards. Ward’s 15-yard touchdown was his only catch of the game. Dallas Goedert led receivers with two catches for 66 yards.

The Cowboys and fans had fun at the Eagles’ expense after the game.

Dallas now sits on top of the NFC East at 2-1, while the Eagles fall to 1-2. There is now some momentum underneath the team and they could turn into serious playoff contenders as long as everyone stays healthy.

Carragher about Ronaldo outside the united Manchester United and Liverpool team: Greenwood became a superstar, we had to find a place for him
Laporta on Messi's departure: Barcelona is above the players. I could not pawn the TV rights for 50 years
Guardiola believes that there will always be dissatisfied players: They are paid to play football, and I say that they will not play. How can they be happy?
Zlatan was the second after Totti in 40 years to make an assist in a Serie A match, starting with the 2004/05 season
Ole Gunnar Sulscher: De Gea is among the best goalkeepers in the world. He's holding his tail with a gun again, it's a pleasure to work with him
Guardiola on 3-1 with Brighton: It would have been over with another opponent after 3-0, but not with this
Barcelona wants to sign Olmo, but does not plan to pay 60 million euros for him in the winter. Leipzig intends to keep the player