After asking to make a "point of personal privilege" during a Senate Judiciary Committee meeting on Wednesday, Democratic Sen. Mazie Hirono reportedly accused Sen. Ted Cruz, R-Texas, of "mansplaining" to her about judicial originalism.

The tense moment came while the committee was questioning President Biden’s 1st Circuit Court of Appeals nominee Gustavo Gelpí, a District Court Judge, according to The Hill.

"I would request that my colleague, Senator Cruz, not misstate what I’m saying," Hirono, D-Hawaii, said. "You know what, all this mansplaining, please stop."

Cruz had told Gelpí that Hirono defended him, claiming he would "not commit to originalism" in his rulings "because originalism would prevent outcomes that she supports." He asked Gelpí if he doesn’t intend to "follow the original understanding of the Constitution?" the Daily Mail reported.

Cruz then grew frustrated with Democratic Sen. Jon Ossoff of Georgia, who was chairing the session and cut Cruz off because he was out of time, according to The Hill. 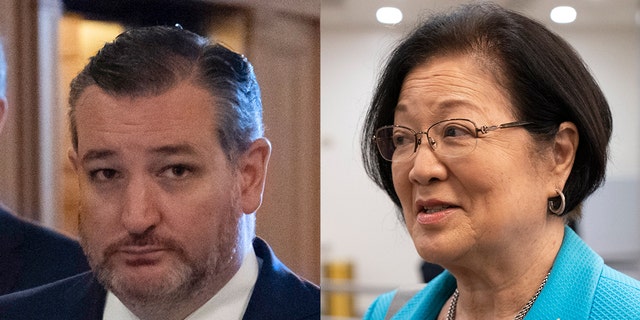 Sen. Mazie Hirono accused Sen. Ted Cruz of "mansplaining" on Wednesday after he claimed she didn't believe in judicial originalism because it "would prevent outcomes that she supports." (Associated Press)

"We generally don't have the chairman trying to jump in thirty seconds in and I recognize the chairman does not want these questions answered," Cruz said of Ossoff, who took office after a special election in January.

After Hirono’s "point of personal privilege," Cruz asked her to clarify what she meant, The Hill reported.

"You just said I mischaracterized something," Cruz said to Hirono before turning to Ossoff who was still hammering the gavel.

"I'm very proud you have the gavel, but a point of personal privilege, Sen. Hirono just said I mischaracterized something she said, so I am asking her: What was mischaracterized?" Cruz said.

Hirono turned to Ossoff and said, "Mr. Chairman, very briefly ... the thing with my colleague is he always has to get the last word and that is a fact."

She added, "I do not object to originalism as applied because it results in decisions that I don’t agree with. I disagree with the way that the Court proceeded – some of the members of the court and how they proceed with originalism to get to the results that they want. So, that’s it."

Last year, Hirono accused Cruz of not listening while they were having a committee meeting on Antifa, according to the Mail.