Listen and subscribe to “The Argument” from your mobile device:

David Leonhardt returns to the podcast to celebrate its 100 episodes and two years on the air. Together, the O.G. “Argument” hosts dissect the final presidential debate, argue over the validity of the Hunter Biden allegations, and discuss Joe Biden’s campaign strategy in its final 11 days. Then, David looks into his crystal ball and makes election predictions — both national and state.

Finally, David recommends finding the joy of a daily routine with family through the soothing tones of Alex Trebek. 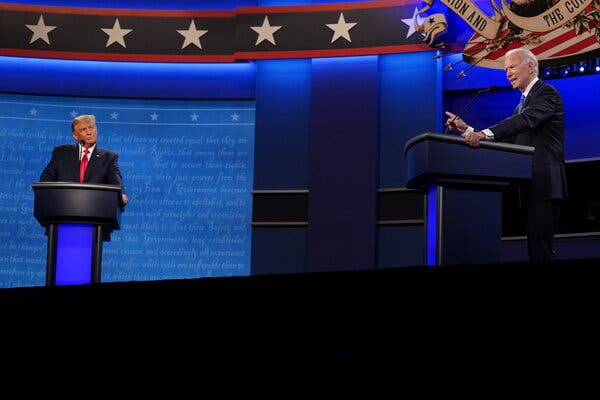 How to listen to “The Argument”:

Press play or read the transcript (found by midday Friday above the center teal eye) at the top of this page, or tune in on iTunes, Google Play, Spotify, Stitcher or your preferred podcast listening app. Tell us what you think at [email protected]

I’ve been an Op-Ed columnist since 2009, and I write about politics, religion, pop culture, sociology and the places where they intersect. I’m a Catholic and a conservative, in that order, which means that I’m against abortion and critical of the sexual revolution, but I tend to agree with liberals that the Republican Party is too friendly to the rich. I was against Donald Trump in 2016 for reasons specific to Donald Trump, but in general I think the populist movements in Europe and America have legitimate grievances and I often prefer the populists to the “reasonable” elites. I’ve written books about Harvard, the G.O.P., American Christianity and Pope Francis, and decadence. Benedict XVI was my favorite pope. I review movies for National Review and have strong opinions about many prestige television shows. I have four small children, three girls and a boy, and live in New Haven with my wife. @DouthatNYT

I’ve been an Op-Ed columnist at The New York Times since 2017, writing mainly about politics, ideology and gender. These days people on the right and the left both use “liberal” as an epithet, but that’s basically what I am, though the nightmare of Donald Trump’s presidency has radicalized me and pushed me leftward. I’ve written three books, including one, in 2006, about the danger of right-wing populism in its religious fundamentalist guise. (My other two were about the global battle over reproductive rights and, in a brief detour from politics, about an adventurous Russian émigré who helped bring yoga to the West.) I love to travel; a long time ago, after my husband and I eloped, we spent a year backpacking through Asia. Now we live in Brooklyn with our son and daughter. @michelleinbklyn

Griezmann on Messi: I admire Leo, and he knows it. We have a great relationship
Rooney on the possibility of a move to Barca in the 2010/11 season: Thinking about it. Could fit in perfectly
Hooray, in England they will let the audience into the stands again! While up to 4 thousand and not everywhere, but the clubs are happy 😊
Solskjaer about the match with Istanbul: these are the Champions of Turkey, it will be difficult
Gasperini on the nomination for the best coach of the year award: If we beat Liverpool, maybe I'll get a few votes
Julian Nagelsmann: Leipzig want to give PSG that final feeling they are talking about
Tuchel Pro Champions League: Match with Leipzig - the final of our group
Source https://www.nytimes.com/2020/10/23/opinion/the-argument-debate-trump-hunter-biden.html