This Nov. 17 and 18, DealBook is holding our first Online Summit. Join us as we welcome the most consequential newsmakers in business, policy and culture to explore the pivotal questions of the moment — and the future. Watch from anywhere, free of charge. Register now. 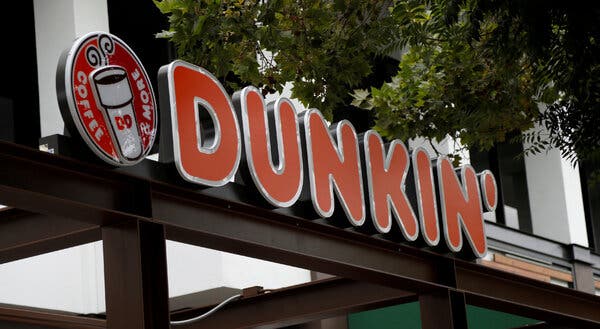 A deal to take the parent company of Dunkin’ private could be announced as soon as today.Credit...Mario Anzuoni/Reuters

That’s a lot of doughnuts

DealBook’s Lauren Hirsch broke the news yesterday: Dunkin’ Brands is close to a $8.8 billion deal to sell itself to Inspire Brands, the restaurant operator backed by the investment firm Roark Capital. A deal could be announced as soon as today, sources say. Here’s everything you need to know about the scoop (or SC🍩🍩P, if you will).

Dunkin’ has done well during a pandemic. The chain was investing in its digital business before the coronavirus outbreak, helping it offer contact-free takeout. Shifting work patterns mean more people are coming in later in the day, boosting premium products like espresso and specialty beverages, which diners may have bought from smaller, independent coffee shops before. (Drinks make up more than half of Dunkin’s revenue, and it dropped “Donut” from its name last year.)

It would be a jewel in Inspire Brands’ portfolio. The Roark-backed conglomerate has been on a buying spree in recent years, acquiring chains like Arby’s, Buffalo Wild Wings and Jimmy Johns. Inspire’s strategy is to improve companies’ digital operations while keeping their brands separate. (Its C.E.O., Paul Brown, has said he wants to organize the company like Hilton Hotels, where he once worked.) Owning a dominant chain like Dunkin’ could be the final touch Inspire needs before going public, as some expect — though Inspire has never confirmed such plans.

The deal isn’t cheap, with Inspire offering a roughly 20 percent premium to Dunkin’s closing price on Friday, which was already near an all-time high. The availability of cheap debt and steady cash flow from the company’s franchises should make it easy to finance, Lauren hears.

And a reminder: Dunkin’ isn’t just a place for coffee and doughnuts — it’s also a place to fall in love.

Judge Amy Coney Barrett is poised to win confirmation to the Supreme Court. Senate Republicans voted last night to send her nomination to a final floor vote, which is scheduled for this afternoon, over Democratic objections. Only one of 53 Republicans in the chamber, Susan Collins of Maine, is expected to vote against.

New coronavirus outbreak strikes the White House. At least five aides to Vice President Mike Pence have tested positive for the virus, though Mr. Pence himself has not. The White House chief of staff, Mark Meadows, told CNN, “We’re not going to control the pandemic.” Separately, European countries imposed new restrictions amid a second wave of infections.

Facebook prepares for election-related unrest in the U.S. The social network is considering restrictions that slow the spread of some posts and lower the threshold for blocking inflammatory content, The Wall Street Journal reports. Such measures are normally reserved for what the company calls at-risk countries, like Sri Lanka and Myanmar.

European cities are reclaiming housing from Airbnb. Lisbon is among the cities using the pandemic to take back empty apartments normally run as tourist rentals, The Times’s Raphael Minder and Geneva Abdul report. The move could hurt Airbnb as it prepares to go public.

Anna Wintour faces scrutiny over diversity at Vogue. She has been criticized by current and former employees for overseeing a workplace “that sidelined and tokenized women of color, especially Black women,” The Times’s Ed Lee writes. The issue has gained prominence as Condé Nast, Vogue’s publisher, confronts accusations of racial inequality.

Six-string therapy may not be enough to save Guitar Center

Guitar Center, the largest musical instrument retailer in the U.S., has begun preparations for a potential bankruptcy filing, DealBook scooped on Friday. But music, like many other hobbies, is booming during the pandemic. What gives?

Sign of the times. Fender, Taylor and other guitar makers have reported record sales, with music and other indoor pastimes getting a bounce in recent months. But the pandemic has highlighted that how a company sells is as important as what it offers, especially for retailers relying on brick-and-mortar stores. Even before the pandemic, Guitar Center was losing to online-only rivals like Sweetwater and direct sales from instrument makers; the same goes for craft stores like Joann Fabric and Etsy, or — let’s be frank — just about every offline retailer and Amazon.

More than a third of the S&P 500 reports earnings this week. Companies have soundly beat (lowered) expectations thus far.

The tech giants are expected to rake in cash, with Microsoft reporting on Tuesday and Alphabet, Amazon, Apple and Facebook on Thursday. On Wednesday, the C.E.O.s of Alphabet, Facebook and Twitter are to testify before the Senate Commerce Committee on “transparency and accountability.”

In finance, HSBC reports on Tuesday; Blackstone, Deutsche Bank, Mastercard and Visa on Wednesday; Credit Suisse on Thursday; and KKR on Friday

Pharmaceutical firms providing coronavirus treatment updates along with earnings include Merck, Novartis and Pfizer on Tuesday; Amgen and GlaxoSmithKline on Wednesday; and Moderna and Sanofi on Thursday.

Updates from heavy industry come from BP and Caterpillar on Tuesday; Boeing, Ford and G.E. on Wednesday; Shell and Volkswagen on Thursday; and ExxonMobil on Friday.

But the biggest number of the week is the release on Thursday of third-quarter U.S. G.D.P., the last major economic data point before the election. It’s expected to show a record-breaking 30 percent annualized surge, but since it follows a collapse of roughly the same magnitude in the previous quarter, the economy will still be down from where it was at the start of the pandemic.

This week, DealBook will highlight how Corporate America is preparing for a momentous election. Today, a P.R. power player tells Ephrat Livni how anxiety about the pandemic and the election inspired a mindful business opportunity.

The election is amplifying anxiety in an already harrowing year of forced separation in a pandemic. “It’s been hard, and I think we all miss humankind,” said Jolie Hunt, the founder the marketing and communications firm Hunt & Gather.

Ms. Hunt has found happiness in hiking. After months of feeling overwhelmed by business, personal and worldly concerns, she turned to it as a solution by inviting several high-powered friends to join her for “Hike & Gather,” curated slumber parties at her home in upstate New York, with the spiritual benefits of an ashram (vegan meals, tarot readings and acupuncture) and the physical benefits of a boot camp (the hiking). Both dates offered, shortly before and after the election, were immediately overbooked.

“I’m going to need a break postelection,” said Joanna Coles, the former chief content officer at Hearst who is currently producing “The Bold Type,” a TV show inspired by her career as editor in chief at Cosmopolitan. She said she fell in love with Ms. Hunt at first lunch — a 2016 Vox Media event the P.R. pro devised, with helicopters flying attendees from Las Vegas to an “inaccessible ledge” in the Grand Canyon with a beautifully laid table and a guitar serenade that lasted exactly one hour. “I thought, ‘I must have this woman in my life,’” Ms. Coles recalls.

The Rev. Maryetta Anschutz, the founder of the Episcopal School of Los Angeles and a former associate dean of Yale Divinity School, said she was looking for connection, perspective and hope, whatever the election results. She trusts Ms. Hunt’s gathering instincts: “Pre-Covid she’d put together a dinner party anyone in the world would want to attend because everyone’s genuinely interesting.”

“It’s not glamping or overly ritzy,” insisted Alexa Christon, the chief marketing officer of Pearson, the educational publisher. The first event, about a week ago, began with a “beautiful” three-hour, rain-soaked march, she said. “Work, Covid, kids, politics, society — we’re used to being consumed by these things, and there’s a weight to that,” she added. After the retreat, however, she said she felt something deeper than the aches and blisters: “I felt me, the weight of me, my being.”

Best of the rest

We’d like your feedback! Please email thoughts and suggestions to [email protected]

Bulykin on Loko's chances of reaching the Europa League play-offs: it Will be very difficult to do anything
Joao Felix: Atletico are missing Suarez and Costa
Loko didn't know what to do when Red Bull scored first. Naumov about 1:3
Gasperini about Atalanta: we will Go to Amsterdam with a small advantage
Striker Berisha Of Salzburg: We were better than Loko and deserved to win
Pep on city's 1st place in the Champions League group: we played very well in all the matches
Shakhtar defender Vitao on 2:0 with Real Madrid: the main Thing is not to fly too high in the clouds
Source https://www.nytimes.com/2020/10/26/business/dealbook/dunkin-inspire-deal.html