Chicago’s former top cop Eddie Johnson turned himself in to police after officers responded to his home for a report of a domestic incident, according to a news report.

A source said Johnson went to the 9th District police station Saturday, WBBM-TV reported. He was “wanted” overnight because he left the scene before cops arrived, according to the station.

Police were called to Johnson’s home Friday night by a third party, the station reported.

Fenner holds the rank of lieutenant in the Chicago Police Department. 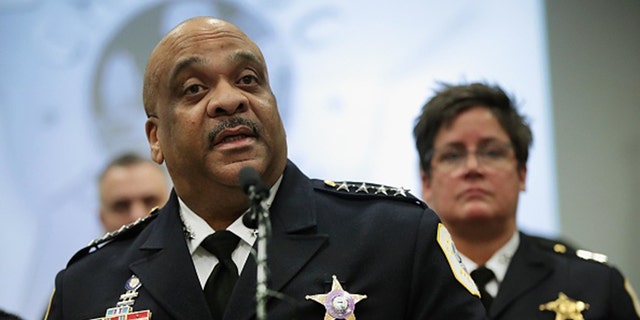 “We had a disagreement. We are fine,” Johnson told a reporter for the station outside his home Saturday.

The department issued a statement saying no injuries were reported and no arrests were made in connection with the incident, the Chicago Sun-Times reported.

The incident was the latest trouble for Johnson in the past few days.

It comes on the heels of a lawsuit being filed that accuses Johnson of sexually assaulting a female police officer when he was Chicago police superintendent.

Cynthia Donald claims the attacks happened when she worked for Johnson’s security detail as his driver.

Two days after the filing of the lawsuit, Chicago’s inspector general announced the suspensions of seven officers in connection with an incident last year in which Johnson was found passed out in his departmental vehicle.

The IG found Johnson had consumed the equivalent of ten drinks that night.

Johnson was fired from the superintendant's job shortly after the incident.

The Salzburg defender's career has had crosses and a stroke at 27 - and he's come back every time
A year ago, it had infuriated him that Holand was getting all the attention. Now he is the king of penalties and the main star of Salzburg
Three draws is not the main positive for Loko in the Champions League. All opponents are forced to adapt to Nikolic
Gladbach fans made a noise at the Inter hotel in the morning and left a hundred cans of Cola. In 1971, because of this, the match was canceled, in which the Italians flew 1:7
VAR-question for the first goal against Loko: was there definitely no offside? We were shown a shot, but not convinced
Steve McManaman: Real Madrid are an aging team. They need new players if they want to reach their previous heights
ISCO could move to Sevilla in January. Lopetegui is personally Interested
Source https://www.foxnews.com/us/chicago-cops-respond-to-ex-top-cop-eddie-johnsons-home-for-domestic-incident-report?utm_source=feedburner&utm_medium=feed&utm_campaign=Feed%3A+foxnews%2Fnational+%28Internal+-+US+Latest+-+Text%29