Given 2020's historic wildfire season, the early return of the destructive flames puts 2021 on pace to be another potentially record-shattering year for blazes.

Human-caused climate change plays a role in making these extreme fire events worse and more likely to happen. Erica Fleishman, director of the Oregon Climate Change Research Institute at Oregon State University, said these extreme scenarios are only a preview of what's to come in the coming years and decades.

"It's a trend that is being observed and has been projected for decades by thousands of scientists around the world who have very strong evidence that as emissions of greenhouse gases continue, there are more frequent instances of all types of climate extremes," Fleishman told CNN.

The impacts of the Western fires have become so far-reaching that the smoke traveled to the East Coast, creating unusually hazy skies and blood orange sunrises. On Tuesday, the wildfire smoke pushed New York City's air quality level to be among the worst in the world, surpassing cities like Kolkata in India and Lima in Peru. Other Eastern cities like Philadelphia and Washington DC were also shrouded in smoke. 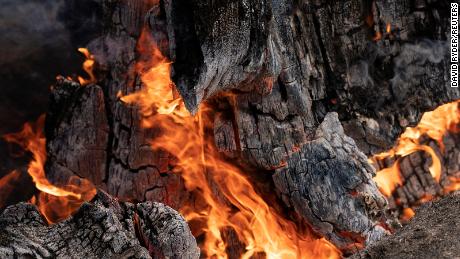 The Bootleg Fire in Southern Oregon, currently this year's largest active wildfire in the country that so far burned an area larger than Los Angeles, was a major contributor to the smoke that glided across the United States. The Bootleg Fire intensified to the point that it created its own weather, producing rare, towering clouds called pyrocumulus clouds.
And it's not just US fires creating these "fire" clouds and spreading smoke across the Northern Hemisphere. Across the border, Canada's British Columbia on Wednesday declared an emergency due to fast-spreading wildfires. Nearly 300 active wildfires have been reported in the province. Meanwhile, vast swaths of Russian Siberia — where people are accustomed to freezing temperatures — are now ablaze with large wildfires, with smoke traveling as far away as Alaska.

Pyrocumulus clouds can penetrate deep into the atmosphere where smoke doesn't settle, causing it to travel long distances across the country. Some like the Bootleg Fire can even enter the stratosphere where jet aircrafts fly. Whereas if the fire isn't as strong, it creates a weak updraft where the smoke only impacts the local region.

Fleishman warns that this year's record-breaking weather events is unlikely "going to be an anomaly in the coming years and decades."

Wind patterns also explain why Washington state and the northern parts of Oregon aren't seeing any wildfire smoke compared to cities across the country. Janice Coen, a scientist at the National Center for Atmospheric Research, has been examining these weather patterns associated with large fires, highlighting that downslope wind events and hot and dry winds drive fire dynamics.

And as climate change accelerates, these wind patterns will continue to shift.

"With the changing climate, the projected change is that the jet stream will shift towards the north," Coen told CNN, which means that "we might see fewer of these events in California, and see more in Oregon and Washington if these wind events, the regional weather pattern, coincide with underlying dry periods in fortuitous ignitions."

A wildfire may also likely ignite more fires, creating a feedback loop. As fires burn through fuel-laden wildlands, they release heat that rises and creates a plume of hot air moistened by the water in vegetation. It later forms a cloud and builds up an electric charge. Research has shown that positively-charged strikes — which occur more commonly in pyrocumulus clouds than normal clouds — are more likely to ignite another fire.

Coen has also been exploring a rather dangerous wildfire phenomena, currently playing out in California: fire whirls, also known as "fire tornadoes."

As the fire-heated air rises, cold air dashes to take its place, creating a fire whirl. It's one of the most dramatic aspects of wildfires, but also one of the most dangerous. According to the Bureau of Land Management, a fire whirl is a "spinning vortex column of ascending hot air and gases rising from a fire and carrying aloft smoke, debris, and flame."
Large fire whirls can have the same intensity as a tornado. The 2018 Carr Fire outside of Redding, California, for instance, spawned a fire tornado so destructive that it killed eight people and flattened several homes. The deadly fire had winds over 140 mph, which would equal an EF-3 tornado, or the third most intense tornado on the EF scale.
"People tend to describe this as a level of fire behavior beyond the current models, but that's because the operational models are antiquated and they're decades old," said Coen, who has been working with new models and fire simulations to predict where fire whirls form and grow.

Bill Gabbert, a former wildland firefighter for 33 years with the US Forest Service and the National Park Service, describes the event of a wildfire "creating its own weather" as perhaps giving people a false impression, since it only happens on a micro-scale compared to how people generally think of weather events. But it's a basic aspect of fire behavior.

"It's a matter of scale," Gabbert, now the owner of the online news blogs Wildfire Today and Fire Aviation, told CNN. "On a small fire or one that's not burning intensely, you would not notice it. But it becomes much more evident on very large fires exhibiting extreme fire behavior."

Over the last 20 years, most notably in the last decade, Gabbert said he and other firefighters have noticed a major change in the way fires have burned the landscape. Many hotshot firefighters, leading a nearly impossible battle with infernos, have been quitting due to low wages and the physical toll it takes to face raging wildfires. 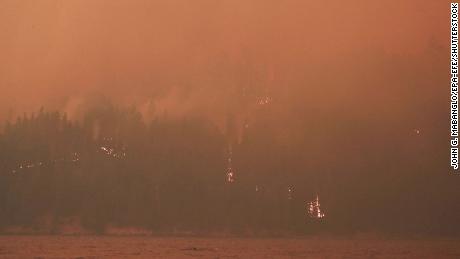 Heavy smoke and flames on the west side of Butte Valley Reservoir from the Dixie fire in Plumas County, California, on July 21.

"It appears that the higher temperatures and less fuel moisture in the vegetation and stronger winds has led to more extreme fire behavior that burn more rapidly and more intensely," Gabbert told CNN. "They grow larger and more difficult to put out."

The medley of climate disasters from months-long drought and pernicious heat waves laid the groundwork in sparking dozens of major wildfires blazing across the West. Philip Higuera, fire ecology professor at the University of Montana, said thanks to climate change, the record-low level of rain and humidity has dried out trees and vegetation, fueling more wildfires.

"You can have the same amount of vegetation in a forest, but if it's wet, it's not available to burn," Higuera told CNN. "These regions across the West that have record dry fuels, that makes more vegetation available to burn — so basically, more of the forest is participating in these fires."

However, fire behavior can have many nuances. Coen warns that the mechanisms causing fire growth are still not widely understood even in the fire science community.

"Until we know better why fires behave as they do, we need to be more cautious about attributing them to climate change," Coen said. "But it is important and it's not saying climate isn't. It just may not impact every fire."

Still, experts say the amalgam of historic drought and record-breaking heat waves that's drying out vegetation are consequences of climate change. Already, climate scientists found that the unprecedented heat wave that engulfed that Pacific Northwest last month "would have been virtually impossible without the influence of human-caused climate change."

And as scientists examine how much of this summer's wildfire behavior can be attributed to human-caused climate change, Higuera said it's important for communities to recognize the impacts of a warming world and that people should expect to see more years like 2020 — and now 2021.

"Climate change isn't the only part of the story," Higuera said, "but it's a major part of what is enabling these widespread fire seasons to occur."