Firefighters save cabin from wildfire and leave note for owner

As the East Troublesome Fire raged near Granby, Colorado, Dan Stones could only imagine from a distance the fate of his family cabin. He said it was a "rollercoaster of a week" and didn't even know about the blaze until he drove up over the weekend.

At one point, the wildfire jumped more than 100,000 acres in mere hours. Stones initially couldn't believe it and thought his home was going to be a loss.

He said the fire had been burning about 30 miles away from his cabin and described the scenario as "very frightening."

Ultimately, the flames burned very close to the cabin — about 5 or 6 feet away, according to firefighters. Fast forward a few days. When the smoke cleared, instead of ashes, a note with this message was left behind: 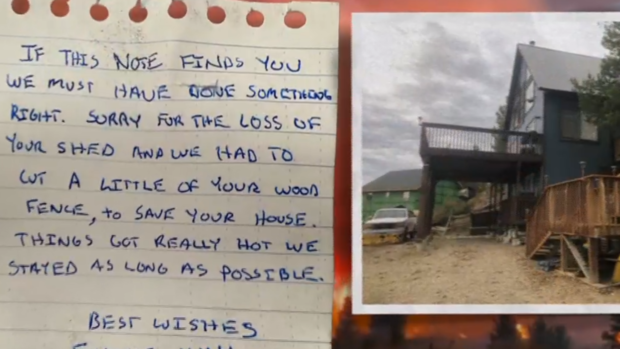 A note left by firefighters for Dan Stones and a photo of his cabin are seen next to one another. CBS News

"If this note finds you we must have done something right. Sorry for the loss of your shed and we had to cut the wood fence to save the house. Things got really hot we stayed as long as possible."

"It absolutely blew me away," said Stones. "And I'm a grown man, and I can admit I wept."

CBS News asked the firefighters with the U.S. Bureau of Land Management, who left the note, if they were surprised by the homeowner's reaction.

"There's a lot of good people that are doing the exact same thing we did," said Kyle Frary. "We just got credit for this."

Frary, who wrote the note, explained that when he first started his career he was taught to leave a quick note if action has to be taken on a person's property, which is what happened in this instance.

The grateful cabin owner said the note was so powerful and too good not to share with the world.

"I get goosebumps," he said. "I probably cried more in the last week than I have since I was 4 years old. It's been wild."

As the act of kindness from the firefighters makes the rounds around the globe, Stones also has his own message of paying it forward.

"This is where we roll up our sleeves. This is where we give back," he said. "And, you know, so one of the things that I really want the world to know is like, please, if your house is still standing, donate that to emergency workers or to displaced families."

As of Tuesday, the wildfire had blackened more than 192,000 acres and was 20% contained, according to the U.S. Forest Service.

Klopp on the Premier League calendar: No matter what I say, it won't help. Waste of time
Barcelona paid tribute to Maradona with a minute of silence before training
Benzema does not train in the General group and works indvidiualno
Did you see the shape you wanted to draw? Victory twice tried to support Dzyuba with graphics in the sky, the first attempt was forbidden by the dispatcher
Aspilicueta on the match against Tottenham: Chelsea always want to be the no 1 club in London
Tebas on Messi: I Want to see Leo in La Liga as well as Mourinho, Pep, Klopp, Ronaldo
Farewell to Maradona in Argentina: there were only relatives, buried next to their parents
Source https://www.cbsnews.com/news/colorado-man-finds-home-and-firefighter-note-after-east-troublesome-fire/