Visualization of the effectiveness of face masks amid coronavirus

A spike has been reported in radiation levels in the restricted zone around Ukraine's Chernobyl Nuclear Plant due to multiple forest fires. "There is bad news – radiation is above normal in the fire's centre," Yegor Firsov, head of Ukraine's state ecological inspection service, said on Facebook on Sunday, March 5, adding that the fires spread to about 100 hectares (250 acres) of the forest.

More than 100 firefighters, three aircraft and 21 vehicles were mobilized to battle the blazes in the area around the Chernobyl, which had witnessed the world's worst nuclear accident back in 1986. 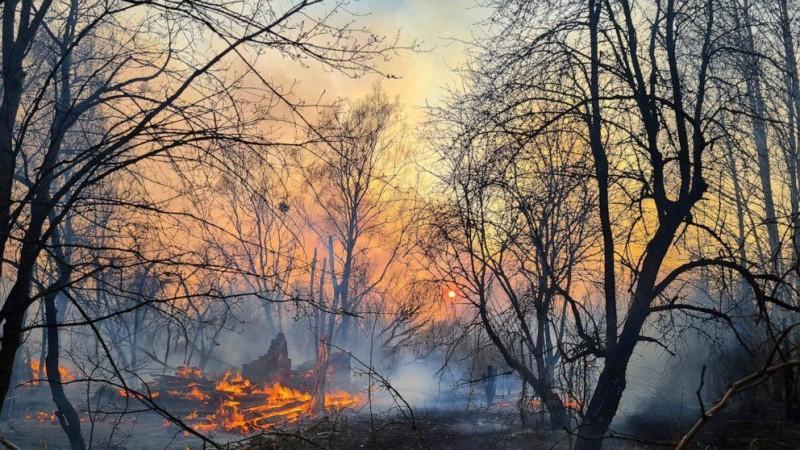 The Ukrainian State Emergency Service said that the blazes required as many as seven airdrops of water and that the situation is now under control. "As of April 5, 7:00 am, there was no open fire, only some isolated cells smoldering," it informed, denying Firsov's claim that the fires covered 250 acres of the forest.

The service further said that "an increased radiation background in individual areas of combustion" caused complications in fighting the fires. However, the radiation levels were subsequently brought down within normal limits.

In 1986, the fires were within the 2,600-square-kilometer Chernobyl Exclusion Zone polluted a large area of Europe, with the region immediately around the power plant the worst affected.
People are not allowed to live within 30 kilometres of the power station.

(This is a developing story. More details awaited)

I believe in Zlatan. Ibrahimovic asked about Milan's chances of winning the Scudetto
Man City have yet to offer Aguero and Fernandinho contract extensions
Frank Lampard: Chelsea do not have Hazard, who accounted for 50% of goals and assists, and Diego Costa with 30 goals for the season
Let See ten Mangalica and we win the Champions League. The Milan newcomer was a nightmare for Messi, quarreled with Pep and was a favorite of Allegri
Real Madrid can sign Aguero, Giroud or Milik after Jovic's departure
Chelsea spent the most in Europe on transfers in 2020. Manchester United - 2nd, Man City-3rd
Zlatan has scored every year since 1999. Yesterday he scored the first goals in 2021
Source https://www.ibtimes.co.in/forest-fires-near-chernobyl-nuclear-plant-ukraine-cause-16-spike-radiation-levels-816859

How fast do you cancel streaming services? It's a problem for Hollywood

Trump leaves America at its most divided since the Civil War

Waiting for a Bull Moose

When the National Security Debate Becomes a Culture War

Jared Porter of the Mets Accused of Harassing Female Reporter

Trump's legacy will take years to purge from the American psyche

Analysis: Trump's legacy will take years to purge from the American psyche

12 slain, dumped on road in rural dispute in southern Mexico

Rescuers in phone contact with workers trapped in China mine

With Trump's exit, the Fox News presidency will come to an end

Hannity: Democrats' 'deprogramming' rhetoric the opposite of Biden's calls for 'unity'

Phil Spector: When a Musical Hero Is a Moral Monster

China and WHO acted too slowly to contain Covid-19, says independent panel