Directed by friend (and possibly her biggest fan) Martin Scorsese, “City” gives her approximately 210 minutes to opine on everything from the subway system to money to clueless tourists — and it’s just not enough. Lebowitz spoke to The Envelope and dug into her bibliophilia, what gets Scorsese irritated and getting parodied on “Saturday Night Live.”

As the documentary makes clear, you’re a reader first and foremost. What are you reading now?

I’m just finishing Cynthia Ozick’s new book (“Antiquities”). She’s a fantastic writer. This is a very short novel, especially in these days when novels tend to be 7,000 pages long.

I’m glad you picked fiction, because I find as I get older, many of my peers say they can’t focus on fiction.

There is something wrong with them. So despite what was happening in the world in the past year, was it kind of a fulfillment of a dream to have so much time to read?

Of course, but this dream did not include having millions of people die. It also was enforced, and I’m incredibly resistant to authority.

Whose idea was the documentary?

It was Marty’s idea. Marty is always wanting to film things. He made a documentary about me for HBO 10 years ago, “Public Speaking.” As soon as he finished that, before it was even out, he said, “Let’s do another one.” It seemed absurd to me. I said, “If someone made two documentaries about the same person and that person isn’t George Washington, I would be rolling my eyes. I don’t want to be the person I’m rolling my eyes at.” … Then Marty made a deal with Netflix to make “The Irishman,” and he put this in his deal.

That must be flattering.

Well, I wasn’t there. So, of course “The Irishman” took 150 years to make, it was way postponed. What takes long with Marty is the editing, because Marty never feels finished. I guarantee you if they had not taken it away from him, he would still be editing “Taxi Driver.” He’s still angry.

To me, great friendships are emotionally — I don’t mean this erotically — like love affairs. It’s some kind of chemical thing. Neither Marty nor I remember where we met. But I did notice over a period of time, whenever I saw Marty at a party, I’d always spend the whole night talking to him. 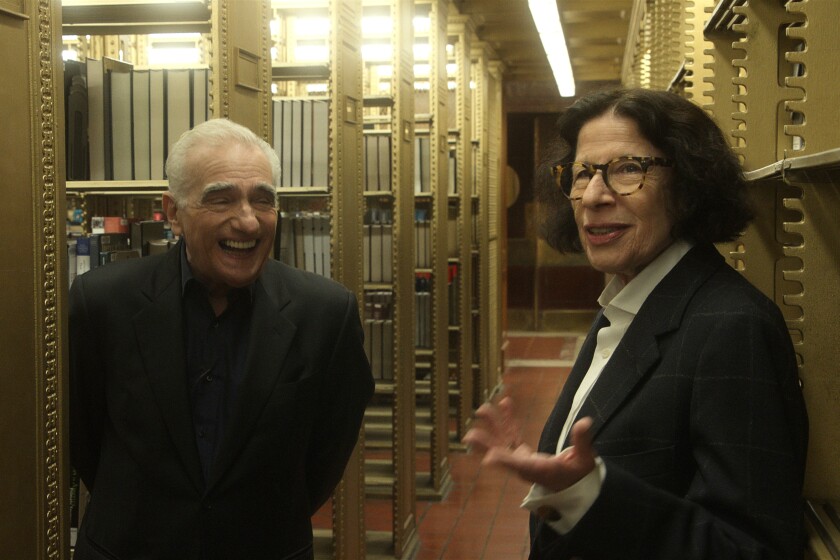 Fran Lebowitz and Martin Scorsese in “Pretend It’s a City.”

Have you seen the documentary?

I’ve never seen Netflix, because I don’t have a computer and I don’t have a Wi-Fi connection. But I’ve seen it 8 million times in 100 million different forms [during the production process]. I have never been able to stand watching myself. Even when I was young I never watched myself. I don’t know how actors do this; it’s unbearable.

So how far does the lack of technology go — do you have cable? A TV?

I have cable television, and now everyone’s saying, “Fran, they’re not going to have it very much longer; what are you going to do then?” Of all the things I have to worry about in the future, this is not on my list.

Do you actually watch the TV at all?

If I’m home and I have time, I watch “Jeopardy!” And every week when I watch “Jeopardy!” I make thousands of dollars and yet I still have no money. I don’t answer my phone during “Jeopardy!” Many years ago I got a phone call out of the blue: “This is so-and-so, a producer on ‘Jeopardy!’ We just thought you might like to know on such-and-such day, you’re going to be a category on ‘Jeopardy!’” And I was a category! It was one of the most brilliant things in my life.
Do you watch anything else?

Other than “Jeopardy!” I never watch TV deliberately. I watch in the middle of the night; I flip around because I can’t sleep. And I’m always annoyed if there happens at 4 in the morning to be no “Law & Order.” I don’t know why there’s not a “Law & Order” channel. I did, like, 12 “Law & Orders,” I played an arraignment judge and I’m on for, like, three minutes. And a few times, I’ve been awakened by my own voice. I think, “Oh, you looked so much younger when you were younger.” Then I assume you didn’t see the “Saturday Night Live” parody of you and Marty recently.

I was home reading. People started calling me because they saw it. I would not have watched it even if I knew. I said, “If you’ve never had a caricature drawn of you, you might think this is a great thing [to be parodied] — but no one likes them.”

I bet Netflix did.

Yeah, I guess they would be happy with that.