From Screen Print to Acrylic Painting: A Demo

Mark Williams is an artist who is in love with caves. His favorite out-of-studio activity is visiting, exploring, and photographing the inner life of these structures. In the studio, his vivid and evocative abstract designs, created with acrylic paint on top of screen-printed fabric, are based on the organic patterns found within caves. Each cave speaks to him. He listens carefully. Referring to his desire to participate in a National Park Service Artist-in-Residence program, Williams says, “I’d love to go into a cave, sit there, and draw for hours on end. You can’t do that sort of thing in commercial caves with guides pushing people along. In that situation, all I can do is shoot as many pictures as possible while I’m in there.” Williams photographs these subterranean hollows as if, in doing so, he could literally absorb them. 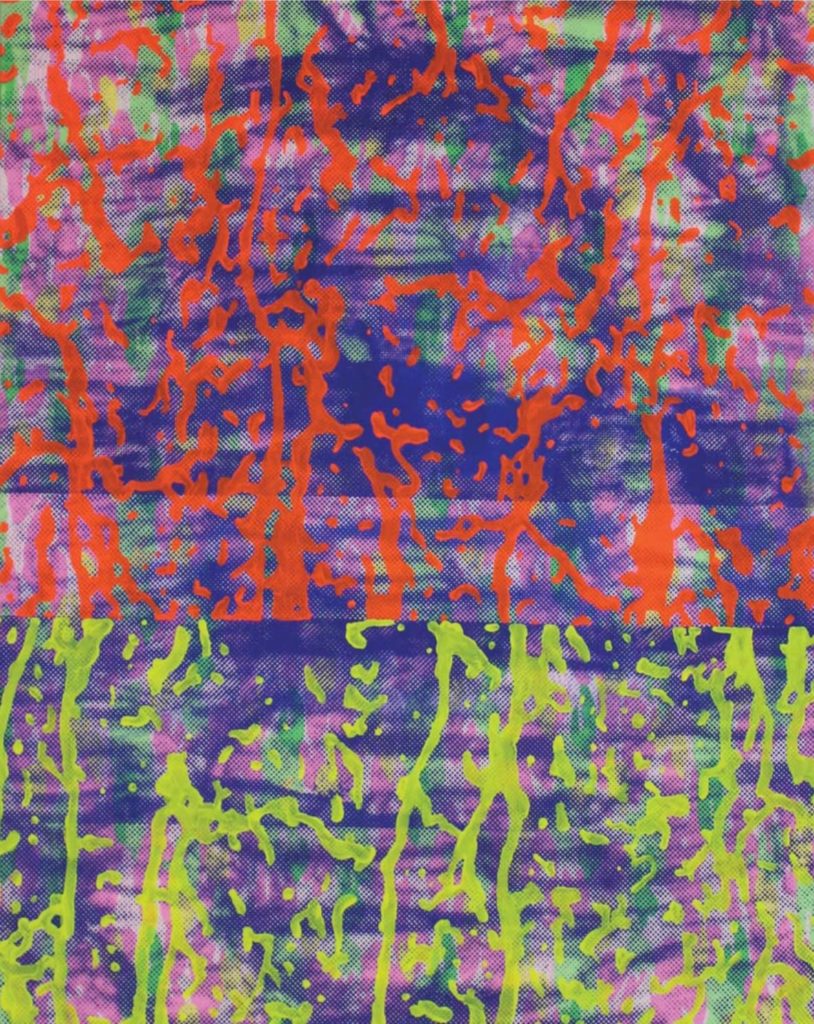 It would be a mistake to refer to Williams as a spelunker. Spelunker is, evidently, a derogatory term among those who seriously explore caves and cave formations. “Spelunkers,” says Williams, “are unskilled amateurs who often get into trouble. I am a caver. Cavers rescue spelunkers!” This distinction is understandable coming from someone whose artwork and inspiration are entirely based on his love of caves.

Williams, a Miami University (Oxford, Ohio) graduate who majored in painting and printmaking, discovered his visceral relationship with caves by accident while on a road trip through Virginia to investigate graduate school programs. Once he’d made that first spontaneous visit to a cave years ago, there was no turning back. The protest themes of his earlier work, along with his leaning toward kitsch elements, toy soldiers, Play-Doh, and flea market finds as artistic tools for social commentary, subsided. He set those politically-driven interests aside, partly because the United States had withdrawn from Iraq, but also in order to explore, understand, and photograph the organic, underground structure of caves. This unanticipated artistic shift of gears represented a major change from purposeful storytelling toward a highly individualized form of pure color-field abstraction.

The thousands of photographs Williams has taken in caves form the raw material on which he’s based his unique multi-layered, multi-stepped, multi-processed work for the past four or five years. That work defies any narrow categorization. It is simultaneously cerebral and quietly but insistently emotional.

To be clear, Williams’s shift to brightly hued, abstract work did not take place in a cavernous vacuum. He’s a man deeply immersed in advanced color theory, especially the seminal work of Josef Albers. Another important developmental influence impacting both Williams’s color choices and his deliberate move toward abstraction is the time he spent helping to categorize and maintain the extensive LeWitt Collection, largely consisting of conceptual and minimalist work by Sol LeWitt and other artists. Long and intimate exposure to LeWitt’s vividly colored, minimalist, geometric drawings and paintings had a profound and lasting effect on Williams’s artistic vocabulary. 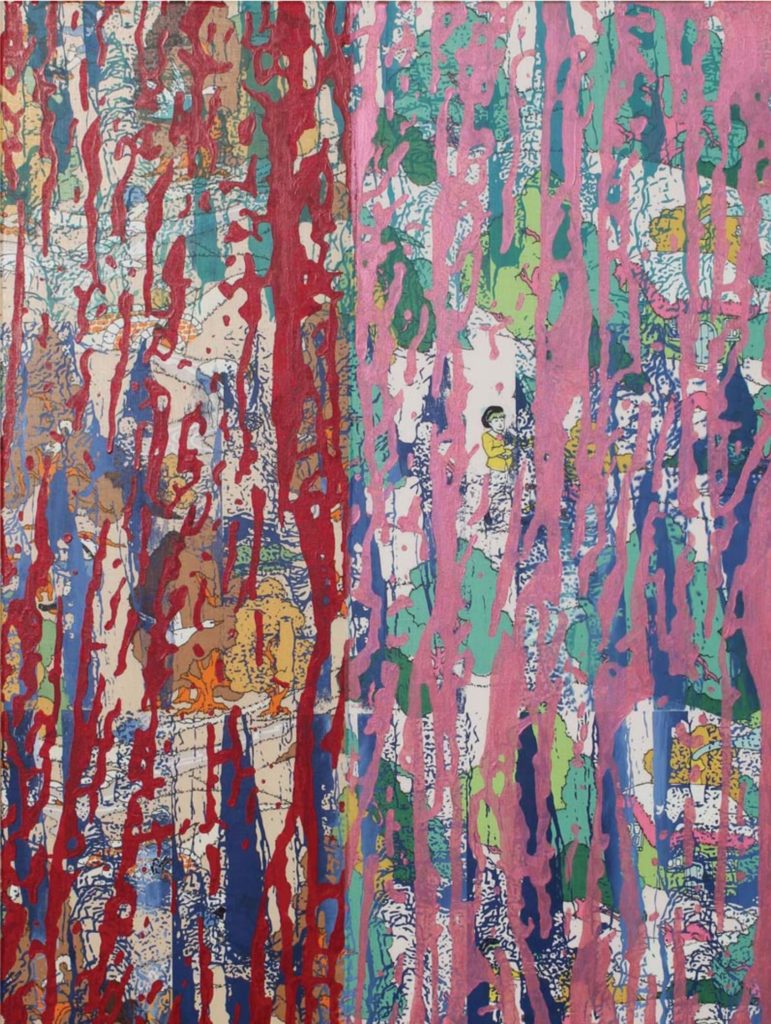 A SCREEN PRINT is created by pushing ink through a mesh screen. To obtain the desired image, the artist blocks portions of the screen so the ink cannot permeate. Screen printing dates back to 10th-century China, although Andy Warhol is credited with popularizing screen prints in the 1960s. 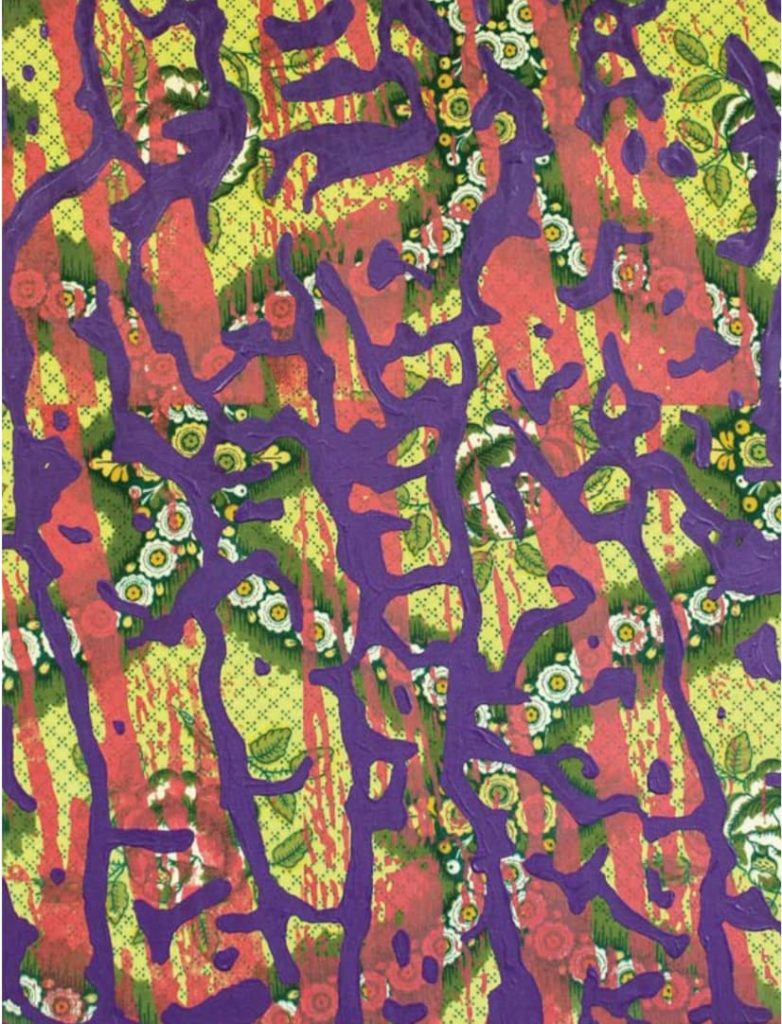 Although Williams’s process includes painting, he rightly describes himself as a print-maker. This is in part because he likes the idea of making editions, but mainly because his creative drive is entirely devoted to the methodical rhythm of repetitive processes. He garners his printing motifs from long photographic sessions in caves (with and without the use of a tripod). This is followed by extensive hours of computer work to isolate, digitally tweak, and manipulate tiny close-up sections of his photographs.

He’ll enlarge or reduce his digital photographs in order to zero in on an irregular, abstract, textural pattern that he can use as the basis of a new composition or series (see White Bluff River and photo). Williams will then print the selected detail in black ink on a sheet of acetate or translucent paper. This design must be “burned” (photographically transferred) onto a framed, fine-mesh polyester screen that he’ll use to create the print. In the past Williams would burn his own screens but, lacking expensive commercial equipment and finding the process time-consuming, he has followed the lead of Andy Warhol and Robert Rauschenberg; he now has his screens burned by a service provider. Burning makes the negative area of the screen around the design impermeable, but leaves the design area open. 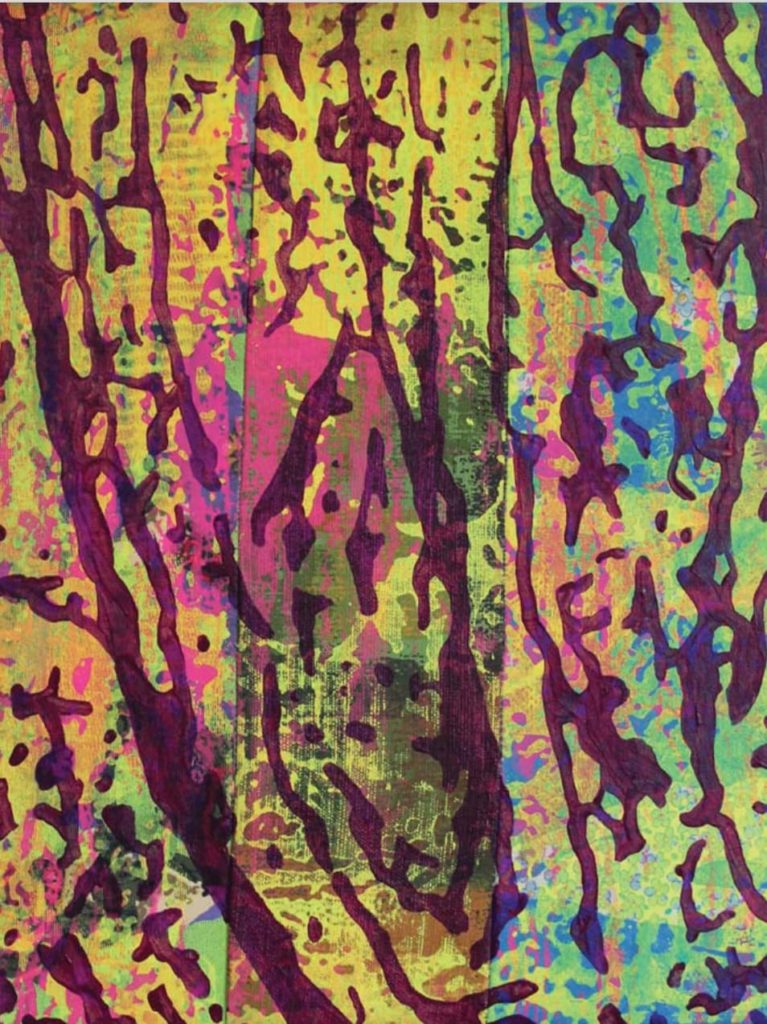 Variations on a Theme

Williams screen prints a selected image multiple times, from canvas to canvas, often changing the direction or orientation of the image to achieve an appearance of textural variety. Working this way, Williams quickly creates the beginnings of a series based entirely on one screen-burned photographic detail. He can then treat this detail in multiple ways by printing a different image on top of the first or by simply rotating the original image for a different compositional density.

The printing is mostly monochromatic — limited to a single ink color — although he sometimes applies multiple colors to the screen. He may also change the ink color during printing sessions. For Williams, it’s all about theme and variations.

For another artist, the screen printing process would be enough, but for Williams this is merely the first stage. 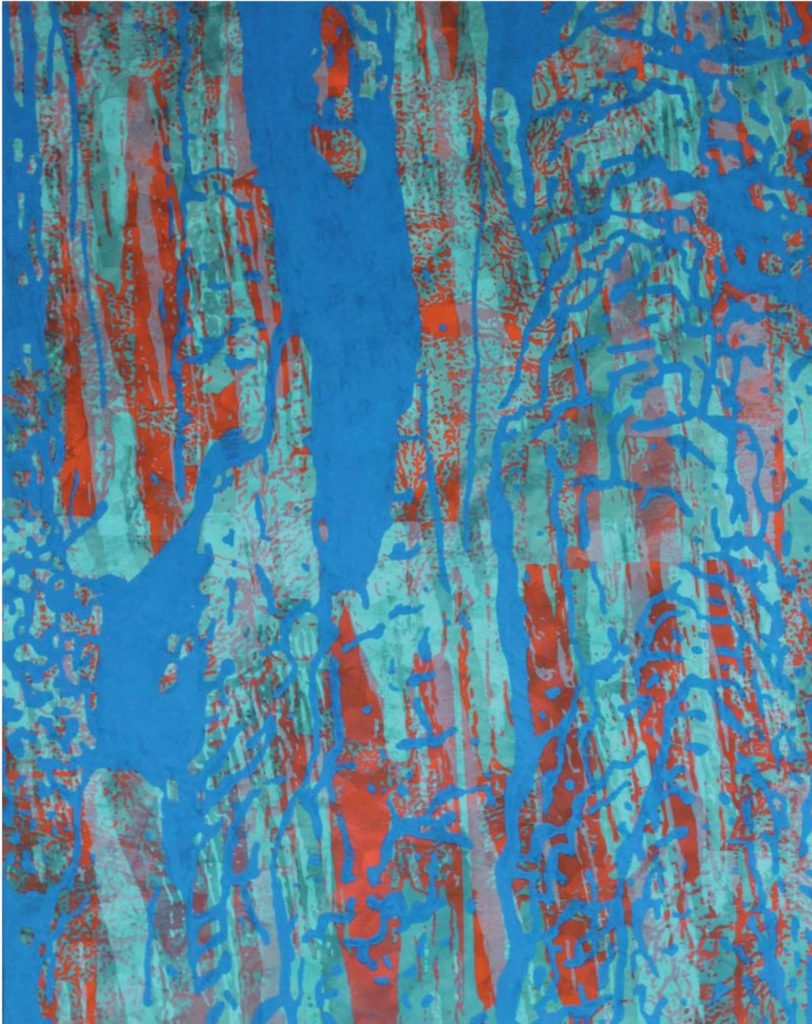 Williams now takes his screen printed fabric and stretches it over prestretched gessoed canvas. At this point, he often seals the fabric with diluted liquid matte medium. This medium provides a ground that will prevent the absorption of acrylic paint into the fabric.

Next, Williams projects an image of an additional cave detail onto the stretched, screen printed fabric and carefully brushes acrylic paint over the image, filling in the projected shape with color. Painting over the projected image rather than drawing the outline of the projection and then painting is important. “I could never get rid of the pencil marks,” he says. “ I can eliminate that one step by simply painting directly over what is projected. The finished product must be perfectly clean. I have been working with projected imagery for 20 years. Working this way seems entirely natural to me. I paint like a printmaker.” 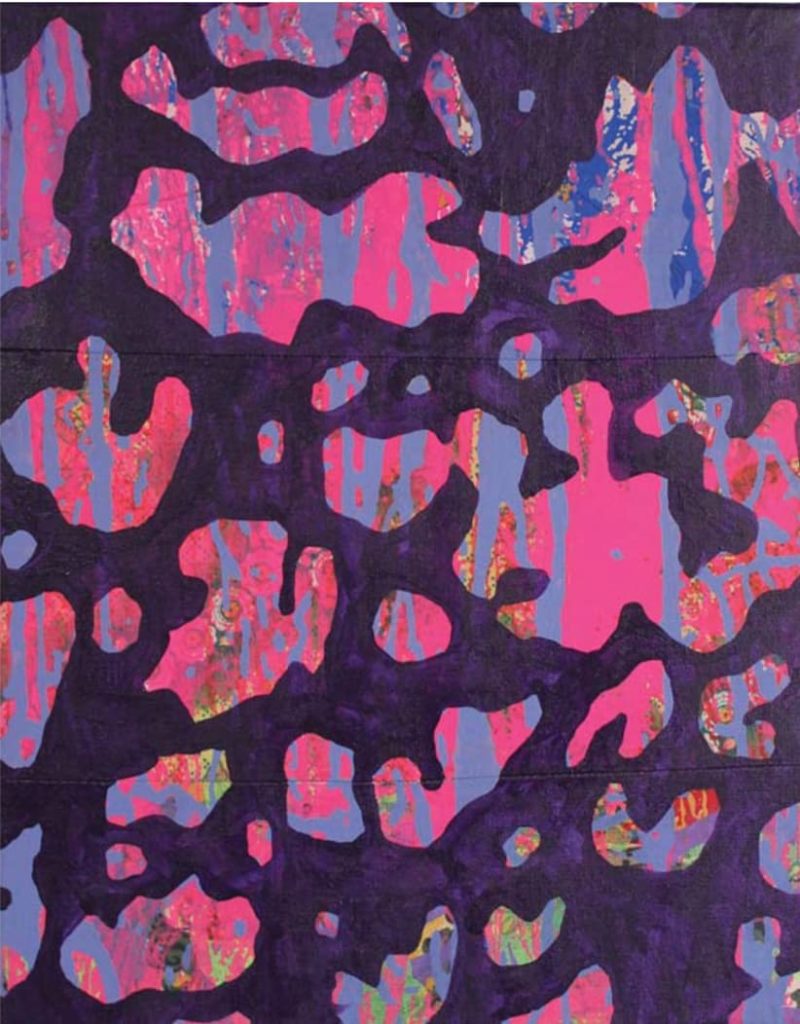 Williams’s carefully selected color choices are often provocative and always unusual, and the edges of his painted shapes are sharp, hard, and unambiguously defined. Most recently he has been experimenting with fluorescent paint colors for more dramatic contrasts. He likes Golden acrylics because of their high pigment density and also favors Lefranc & Bourgeois Flashe vinyl-based paints.

Williams’s painted screen prints evoke an emotional response similar to hearing an unknown piece of music with no lyrics or point of reference other than the listener’s interpretive experience. The effects he achieves are mesmerizing individually — and even more so when seen as a group. Like the caves themselves, Williams’s work is challenging, surprising, and uniquely beautiful.

Demo: From Screen Print to Painting 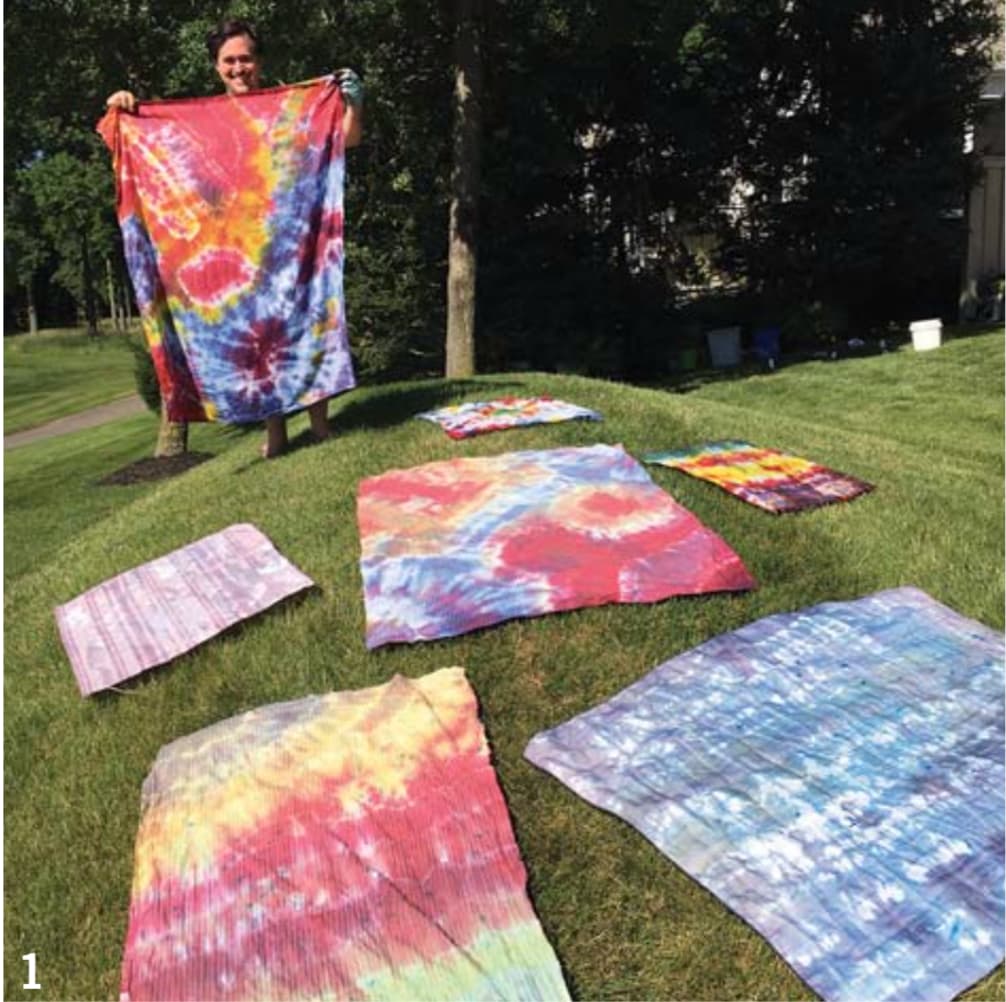 My printing surface is either tie-dyed canvas or fabric, or a commercially printed fabric. Here you see several fabrics I’ve tie-dyed and laid out to dry. 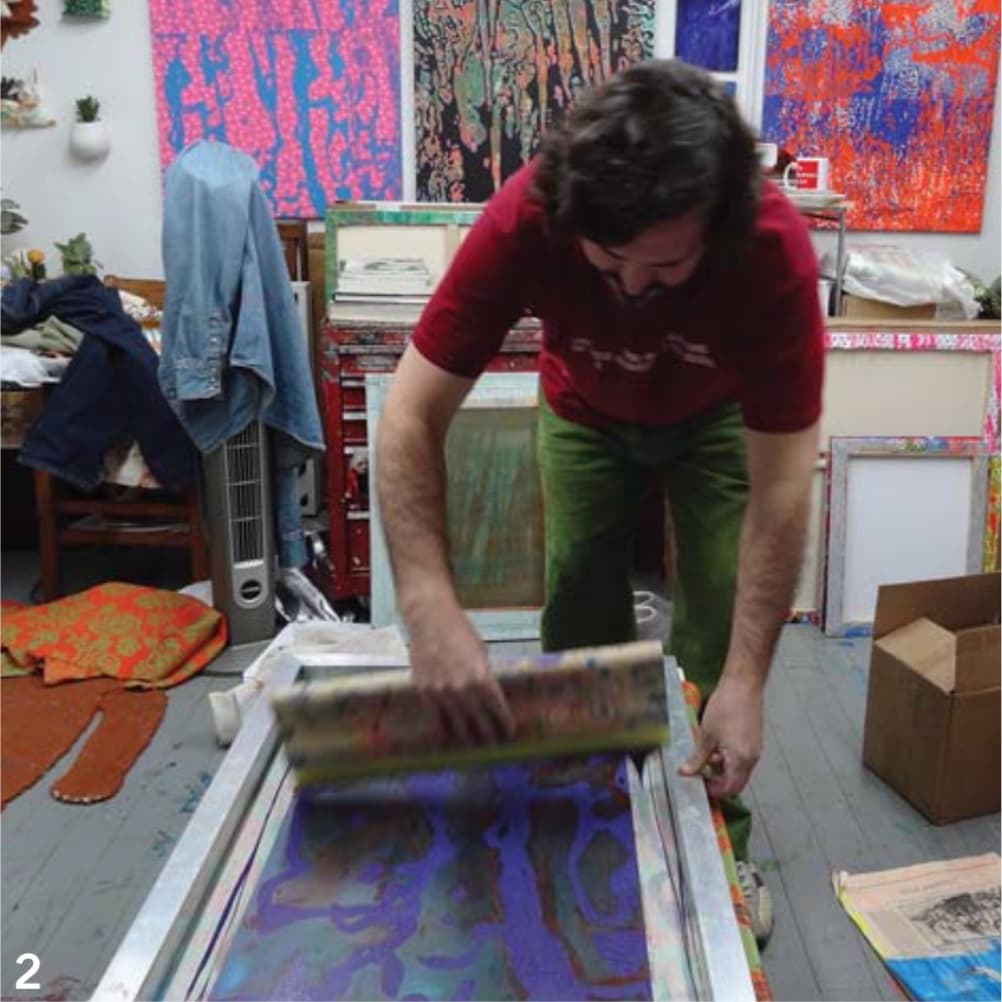 Once I’ve burned (photographically transferred) my design onto a screen, I print the design onto the fabric or canvas. With a squeegee, I push the ink against the screen. The ink seeps through the areas of open meshwork and onto the fabric. 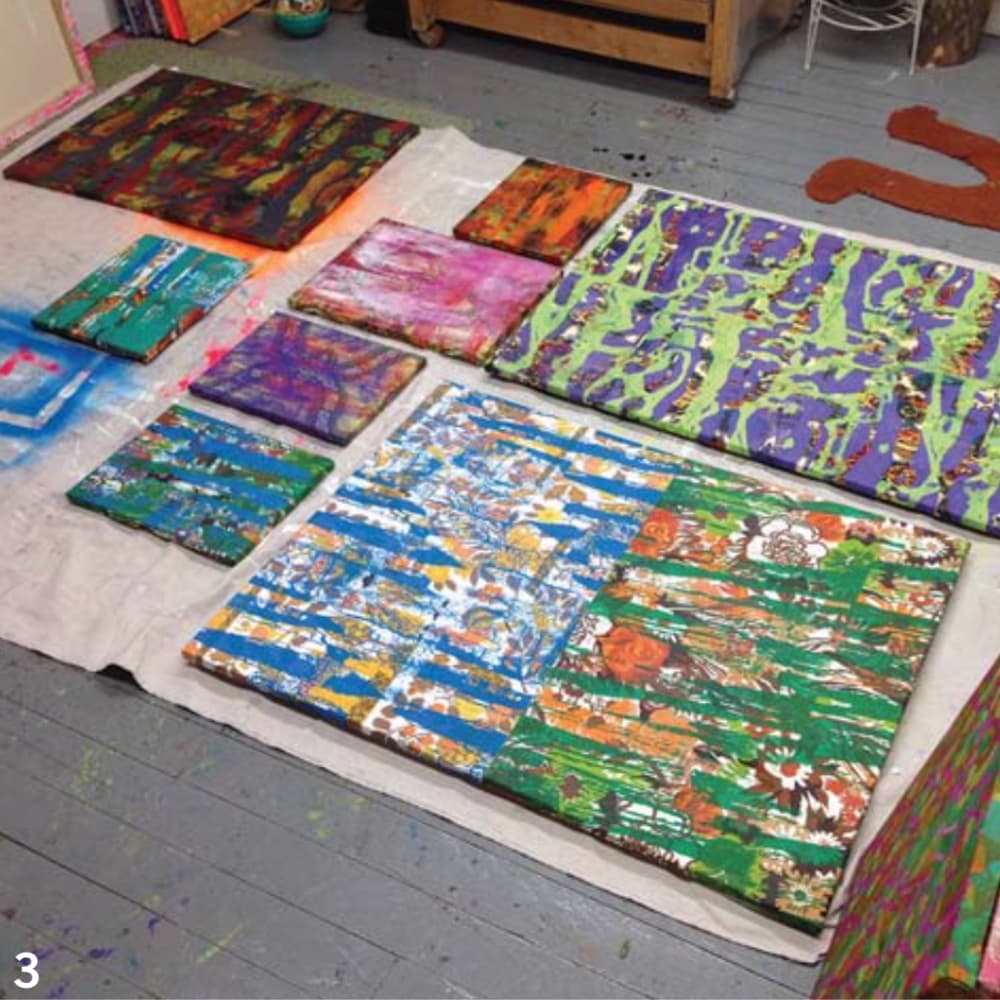 On the floor are screen printed fabrics that have been stretched and are now drying after an application of matte medium. The medium provides a ground for the acrylic paint, which I’ll apply next, and keeps the paint from seeping into the fabric. Sometimes I don’t apply the medium so that I can achieve a more diffused look with the paint. 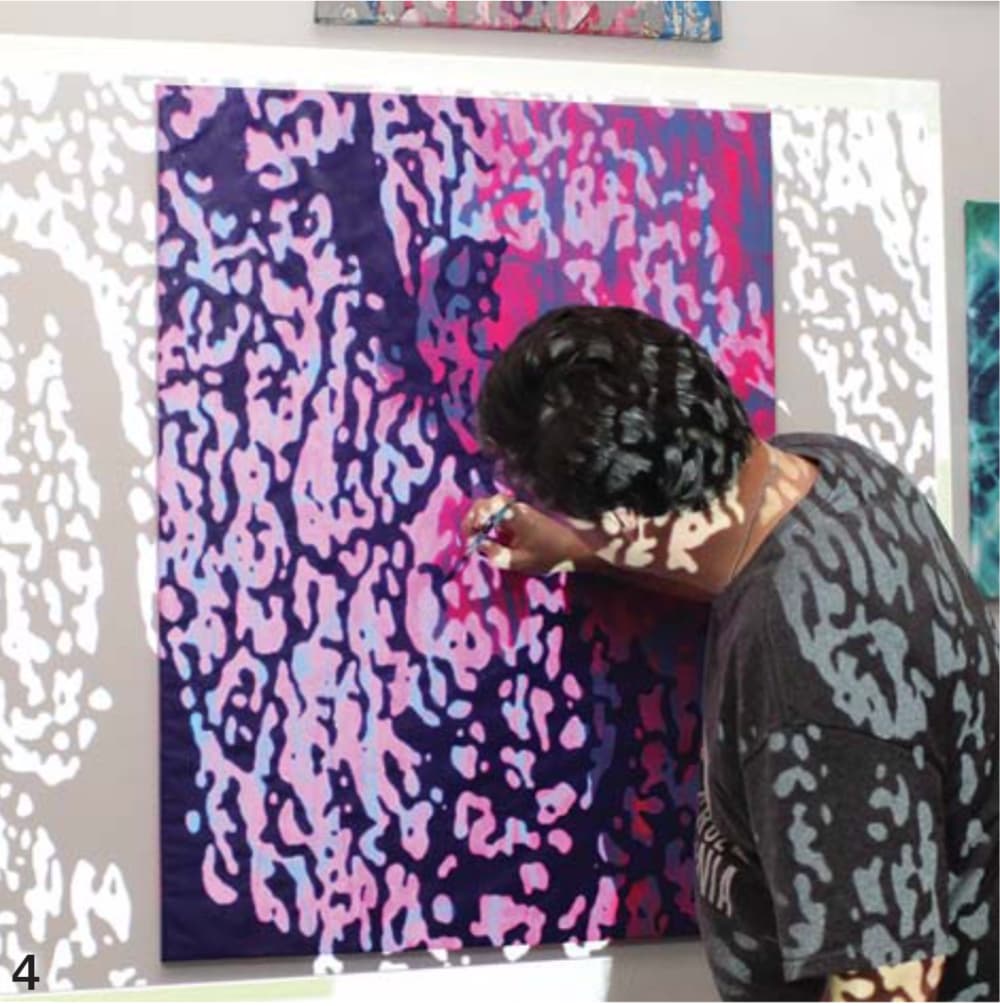 I project a design onto a screen printed fabric and paint in the shapes. I take great pains to keep the edges crisp and generally want to keep the surface of the paint smooth and clear of brush marks.

Mark Williams received a bachelor of fine arts degree in painting and printmaking from Miami University in Oxford, Ohio. He then moved to New York City to work as an artist while studying at the Art Students League of New York and the School of Visual Arts. He went on to study at the University of Connecticut (Storrs) where he received his master of fine arts degree. At various times in his career, he has worked as an assistant for Sean Scully, Donald Sultan, and Sol LeWitt. In addition to his photography and studio work, Williams teaches drawing at Three Rivers Community College (Norwich, Conn.). Williams’s work is widely exhibited and is part of the collections of the Museum of Modern Art (New York City) and the Wadsworth Atheneum (Hartford, Conn.). Visit Williams’s website at markwilliamsart.co.

Susan Gorsen, of Louisville, Ky., has exhibited her color-field oil pastel drawings since 1981. Her work is in public, corporate, and private collections in the United States, Ireland, and Germany. While living in Philadelphia, she was a columnist and critic for Art Matters, and she has also written for The American Craft Report.

This article appeared in the June 2017 issue of Artists Magazine.

Massimiliano Allegri: I Want to work in the Premier League. The League is progressing thanks to foreign coaches
Branislav Ivanovich: Abramovich is one of the most important people in my career. Not just the owner, but a friend
Zlatan Ibrahimovic: Jordan's Chicago is a perfect example of the character of the winners. I'm not Michael, but I also demand a lot
For the first time, Ronaldo does not Interfere with Juventus. This season will be his best in Italy, but Torino risk repeating real's problems
Serginho Dest: I Hope to play with Messi for another season. Everyone wants him to stay
Jose Mourinho: No one cried for us when Tottenham played 4 games in a week
Zidane called soboslai and wants To see him at Real Madrid in January
Source https://www.artistsnetwork.com/art-mediums/mixed-media/from-screen-print-to-acrylic-painting-a-demo/

Does a dry fall in Los Angeles always lead to a parched, fire-prone winter?

Vogel: Lakers 'have to be even better' to repeat as champs

James McCann gets ‘ultimate’ stamp of approval from Joe McEwing

Friday Night Owls: How did the U.S. become so caught up in a cycle of endless wars?