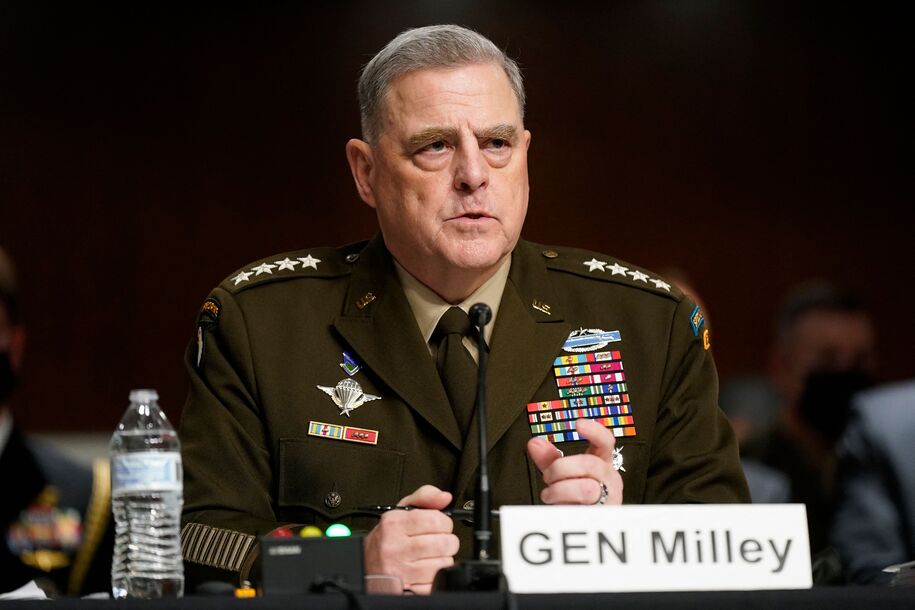 News that Gen. Mark Milley had exchanged phone calls with Chinese military officials to let them know the U.S. was not planning an attack was greeted with dozens of earnest editorials, like this one in USA Today, explaining why Milley just had to resign.&nbsp;When&nbsp;Milley made statements during the Afghanistan withdrawal that seemed to indicate a slight difference between the timetable he advised and the one that President Joe Biden adopted, Republicans were again outraged that Milley didn’t resign in protest.&nbsp;But of course, Milley had already been declared, as Politico noted back in June,&nbsp;&nbsp;“a villain of the right” when it was revealed that he had pushed back against Trump’s efforts to use the active military to put down Black Lives Matter protests.

Milley, who had been a GOP hero when he strolled across the park to observe Trump waving a Bible over a church from which the priests and parishioners had been driven by military force, had been on the GOP bad list for the better part of a year, despite being hand picked by Trump for his current role. That’s because Milley has, repeatedly, insisted that the military should not be involved in political matters —&nbsp;an anathema to a party that increasingly believes that the role of the military is to support Republicans in what they see as Civil War II.

With that in mind, Republicans certainly came loaded with a double-aught general shot on Tuesday morning when the&nbsp;chairman of the Joint Chiefs of Staff appeared to testify before a Senate panel, with those Chinese phone calls providing the best and shiniest ammunition.

And then Milley&nbsp;made it explicitly and immediately clear that his calls to China were made, in one case,&nbsp;with the full knowledge and support of Trump’s Defense Secretary Mark Esper, and in another with eleven people in the room and a heads-up to both&nbsp;Secretary of State Mike Pompeo and White House Chief of Staff Mark Meadows.&nbsp;

Far from making the calls in defiance of Trump, Miley made it clear he had phoned to be sure&nbsp;the Chinese military was not getting jitters from some things Trump had said.&nbsp;

General Milley: "My loyalty is absolute ... with respect to the Chinese calls, I routinely communicated w/my counterpart Gen. Lee, w/the knowledge &amp; coordination of civilian oversight. I am specifically directed to communicate with the Chinese by Department of Defense guidance." pic.twitter.com/u5HlHNaq0Q

“I am certain,” said Gen. Milley, “President Trump did not intend on attacking the Chinese, and it is my directed responsibility to convey presidential orders and intent. My task at that time was to deescalate. […] At no time was I attempting to change or influence the process, usurp authority, or insert myself into the chain of command.”

All of this did not, of course, cause Republicans to immediately drop their pitchforks. Because Miley, having maintained the political neutrality of the military, represents everything that the GOP considers wrong in a modern American general. It did make Republicans tone down the tenor of their exchange. It didn’t make them any more fond of the answers.

That included the answer&nbsp;Milley gave to Sen. Tom Cotton when Cotton tried to make resigning over Afghanistan some kind of patriotic duty. Milley didn’t just answer the question, he gave an answer that quieted Cotton and underlined how the general sees his role in the nation. It’s an answer that deserves to be studied. And repeated.

“As a senior military officer, resigning is a very serious thing. It’s a political act. My job is to provide advice. My statutory responsibility is to provide legal advice, or the best military advice, to the president, and that’s my legal requirement. That’s what the law is.

The president doesn’t have to agree with that advice. He doesn’t have to make those decisions just because we’re generals. It would be an incredible act of political defiance&nbsp;for a commissioned officer to just resign because my advice was not taken.

This country doesn’t want generals figuring out what orders we’re going to accept or not; that’s not our job. The principle of civilian control of the military is absolute. It’s critical to this republic.

Gen Milley stuff Tom Cotton in a locker today, after Cotton asks him why he didn’t resign over Afghanistan. This is one of the best answers I’ve ever heard a military officer give before Congress. pic.twitter.com/NAqbloa29w

When Milley followed Trump across the street from the White House, he gathered a lot of criticism on this site—some of it extremely serious. Milley’s insistence that he was unaware of the nature of those events until he was caught in the middle of them was difficult to swallow, and his apologies over appearing in the midst of a political event as a uniformed military officer were&nbsp;hard to accept.

Since then, information has repeatedly made it clear that, just as he said on Tuesday, Milley takes the apolitical role of the military extremely seriously. And that he considers resignation from the military to be a political act reserved for only the most exigent of circumstances. Which gives claims that he considered exactly that&nbsp;rather than accept orders to involve the military in a scheme to reinforce Trump’s attempts to hold onto power, much more impact.