A subsidiary of Goldman Sachs pleaded guilty on Thursday and agreed to pay more than $2.9 billion in a foreign corruption probe tied to the Malaysian 1MDB sovereign wealth fund, which was looted of billions of dollars in a corruption scandal.

In addition, several current and former top executives at Goldman will have to return to the company millions of dollars in pay and bonuses they had pocketed in prior years, a financial penalty for those in charge after the scandal unfolded.

Goldman Sachs Malaysia entered the plea in federal court in Brooklyn. As part of its plea, the company admitted that it "knowingly and willfully" conspired to violate U.S. anti-bribery laws.

The $2.9 billion includes payments to U.S. and overseas regulators. The penalties also include roughly $600 million in profits Goldman made off the 1MDB scandal that it will have to return. Goldman had previously reached a $3.9 billion settlement with the government of Malaysia.

Goldman Sachs' board of directors decided to claw back pay and bonuses from top executives, including current CEO David Solomon and former CEO Lloyd Blankfein.

The Wall Street bank is in talks with additional executives to return part of their pay to the company over their role in the scheme, including Gary Cohn, as reported by the Wall Street Journal. Cohn became president and co-chief operating officer of Goldman Sachs 2006. He left the firm in 2017 to become a top economic adviser for the Trump administration. His payout from Goldman upon exiting was roughly $285 million. Cohn resigned from his role at the White House soon after in 2018. 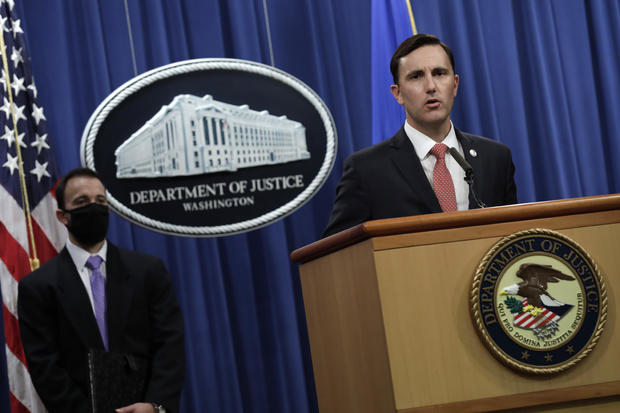 Acting Assistant Attorney General Brian Rabbitt for the Justice Department's Criminal Division and other officials announce a global resolution in a foreign bribery matter at the Department of Justice in Washington, DC, on October 22, 2020. YURI GRIPAS/POOL/AFP via Getty Images

In total, more than $174 million in pay and bonuses are being returned to the company, the board said. The penalty is more than many expected, as clawbacks are not all that common on Wall Street. Wells Fargo executives in the wake of the bank's phony account scandal, and JPMorgan bankers tied to London Whale trading losses, were also hit by clawbacks.

"The Board views the 1MDB matter as an institutional failure, inconsistent with the high expectations it has for the firm," Goldman's board said in a separate statement.

Malaysian and U.S. prosecutors had alleged that bond sales organized by Goldman Sachs provided one of the means for associates of former Prime Minister Najib Razak to steal billions over several years from a fund that was ostensibly set up to accelerate Malaysia's economic development.

"Goldman Sachs participated in a sweeping international corruption scheme, conspiring to avail itself of more than $1.6 billion in bribes to multiple high-level government officials across several countries so that the company could reap hundreds of millions of dollars in fees, all to the detriment of the people of Malaysia and the reputation of American financial institutions operating abroad," said Acting U.S. Attorney Seth D. DuCharme of the Eastern District of New York, in prepared remarks.

In court on Thursday, Goldman Sachs' general counsel, Karen Seymour, said that agents and employees of Goldman Sachs Malaysia had violated the U.S. Foreign Corrupt Practices Act by "corruptly promising and paying bribes to foreign officials in order to obtain and retain business for Goldman Sachs."

Najib set up 1MDB when he took office in 2009, but it accumulated billions in debts, and U.S. investigators allege at least $4.5 billion was stolen from the fund and laundered by his associates.

Public anger in Malaysia over the corruption allegations contributed to the shocking election defeat of Najib's long-ruling coalition in May 2018.

"While it is abundantly clear that certain former employees broke the law, lied to our colleagues and circumvented firm controls, this fact does not relieve me or anyone else at the firm of our responsibility to recognize two critical realities," Solomon said in a statement.

The Department of Justice bought similar charges against Low Taek Jho, a Malaysian national with close relations to Malaysia's ruling party at the time who was the central player in the 1MDB fund. Jho lived a lavish lifestyle in New York, buying luxury goods and even a yacht. Jho's whereabouts are unknown, although he's believed to be somewhere in China and out of the reach of international authorities.

Unknown stories about Diego: as a child, there was not enough food for the whole family, my mother skipped dinner, at the first job I poisoned cockroaches
Pele on Maradona's death: I lost a great friend and the world is a legend
Due to Maradona's death, Boca juniors' playoff game in the Copa Libertadores was postponed for a week
Sterling's heel gave an assist to Foden in the Champions League match with Olympiacos
Messi on Maradona's death: he will stay with us because he is eternal
Jurgen Klopp: I Don't understand why you can let 2,000 people into the stadium for 60,000 spectators and the same 2,000 into the arena for 9,000
In honor of Maradona can rename the stadium of Napoli
Source https://www.cbsnews.com/news/goldman-sachs-3-billion-fine-foreign-bribes-probe/

Kelly Clarkson 'Rushing' Back To The Altar Already?

Why does Hillbilly Elegy feel so inauthentic and performative?