A version of this story appeared in CNN's What Matters newsletter. To get it in your inbox, sign up for free here.
Wyoming Rep. Liz Cheney, the daughter of a former vice president and a power in her own right, was excised from House leadership because she would not stop criticizing former President Donald Trump's continued lying about his 2020 election loss.

Republicans under Trump became the party that appealed to White supremacists and made protecting Confederate statues a campaign issue.

Once the party specifically pushing the importance of the Constitution and the rule of law, it is now unacceptable for party leaders like Cheney to do anything but tolerate the attempted overthrow of valid election results -- the bedrock principle that makes the American political system work. The result is that a major US political party is now wedded completely to an anti-democratic ideology.

More than 100 Republicans who have had it are creating a new organization. They include George Conway, who helped run the Lincoln Project of disaffected Republicans bent on defeating Trump in 2016, but they are far from a mass movement. They aren't even really calling themselves a party.

"I don't think a third party necessarily works in the kind of political system we have," Conway told CNN's Anderson Cooper on Wednesday night. "But there is a need for people who have a conservative to moderate point of view and want to believe in the rule of law and they need a place to go and a place where they can organize and support candidates that are consistent with that."

The split between Republicans willing to stand for the truth and those happy to accept its attempted overthrow does not necessarily signify a complete reorienting of US parties, which have been moving and evolving since government leaders first split into factions in the early 1800s.

The briefest possible history of US political parties

US history is full of splinter parties and at least one complete party implosion, but the wreckage has always formed back into the two-party system.

Early on, Federalist supporters of a stronger national government opposed Democratic-Republican defenders of the primacy of states.

Federalists faded away and Democratic-Republicans split into Jacksonian Democrats and Whigs, who were united against Andrew Jackson, who they viewed as a wannabe king, but ultimately split apart over slavery. Along the way there were others, like the Know Nothings, which started as a secret society.

Opposition to adding slave states in the West largely created the Republicans, who later faced splintering of their own with Bull Moose Progressives led by Theodore Roosevelt, who was frustrated at the direction his party took after he left the White House and was worried about ties between business and politics.

That a faction of Republicans was once progressive seems ironic today, since Democrats like to be referred to as progressive, but that's only after they faced their own splinters, like Dixiecrats, old Southern segregationists in the 1940s. The South, and in particular White voters, was a growing part of Republicans' strategy.

Now the South has gone from largely Democrat to Republican, although a changing population is upsetting that dynamic in some states.

The North and the West Coast have moved from being dominated by Republicans to Democrats and what largely separates Democrats and Republicans is how involved the government should be in guaranteeing racial and economic equality.

Parties change because the country changes

Ronald Brownstein writes this week for CNN abut how a shifting population is changing the current parties' fortunes. He says the decisive portion of the country in presidential elections has for decades been in the Rust Belt and the Midwest. No Republican has ever won the White House without Ohio, for instance. And that state seems to become more friendly to Republicans each year.

But Democrats, who lost the White House in 2016 without Pennsylvania, Michigan and Wisconsin, won in 2020 by reclaiming them.

"Continuing a decades-long trend, the latest census numbers on total growth show a shift in population, and with it Electoral College votes and seats in the House of Representatives, away from Rust Belt states in the Northeast and upper Midwest -- such as Ohio and Pennsylvania -- toward Sun Belt states across the South and West -- like North Carolina, Texas and Colorado," Brownstein writes, adding that with the changing population is coming a new politics.

"Simultaneously, the new census results on voting show that compared with the Rust Belt, the electorate in the Sun Belt is evolving more rapidly in a direction that benefits Democrats, with a growing share of non-White voters and a shrinking share of blue-collar Whites. That means the Sun Belt states, most of which leaned solidly Republican until recently, are likely to grow more competitive, even as their clout in the House and Electoral College steadily increases."

Parties, then, can't help but change. That does not mean this is a realignment of their makeup: Even if their values have shifted, the party has for decades actively appealed to White Americans and religious conservatives. That has not changed, even if Trump has crossed a line by adding an anti-democratic paranoia to the mix.

"I don't view this as a realignment based on what we see in voter behavior," said Andra Gillespie, a political scientist at Emory, who said the old view of a realignment "would be characterized by a sort of jumbling up of the demographic components of a partisan coalition."

Realignments are viewed in hindsight. And that is not exactly happening today, when we see slow shifts happening in real time.

"They don't all happen at the same time and they don't happen over the course of one election," Gillespie said, pointing to the slow move of Black voters to the Democratic Party from the New Deal up to the 1960s, and then a specific moment -- Barry Goldwater's selection as the GOP nominee in 1964 -- that made them the most reliably Democratic voting group.

But there is clearly something going on in the GOP, when a woman like Cheney, whose father was a Republican vice president, is essentially defrocked from her leadership position.

There have been moments of parties splintering, such as when Democrats committed to states' rights and frustrated by civil rights legislation, just as Black Americans were shifting toward Democrats, tried to create their own Dixiecrat party.

After talking to Gillespie I read more about Dixiecrats and came across a Clifford Berryman cartoon at the Library of Congress of Harry Truman plowing with a mule between Strom Thurmond, the Dixiecrat, and Henry Wallace, the Progressive. Despite a split on both wings, Truman still won in 1948. Republicans today are being pulled in opposite directions -- Trump's anti-democratic tendencies vs. those who respect the outcome of the election. 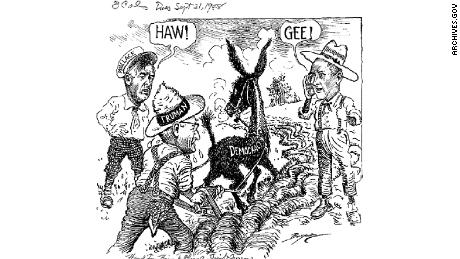 Dixiecrats won 39 electoral votes in the 1948 presidential election, all from Southern states. Those Southern states went back to Democrats four years later, but the rest of the country went Republican, and elected Eisenhower in a landslide.

Twenty years later, in 1968, most of those Dixiecrat states went to George Wallace, the former segregationist Democrat running with the American Independent Party, handing Richard Nixon a narrow victory.

The existing two-party system, as limited as it seems to anyone who wants more than a binary choice on Election Day, is still better than a one-party system -- which inevitably becomes autocracy.

"Without this clash of parties we don't have a capacity to move forward," said the author Jon Meacham during an appearance on CNN last week.