The Universal Hip Hop Museum and filmmaker Lisa Cortes want to bring some new voters to the table – those that the usual campaigns don’t – apathetic voters who think their vote doesn’t count, younger voters unsure how the process benefits them others that might not watch news 24-7 and are just struggling to get by.

Read More: How are Black Americans going to survive the 2020 election?

They are combining forces for the #AllInForVoting campaign and the #HipHopRocksThe Vote campaign to do a virtual panel tied into the film All In: The Fight for Democracy currently showing on Amazon Prime.

Cortes, a hip hop veteran who once worked with artists like LL Cool J and The Beastie Boys, is the Emmy-winning producer of the HBO documentary The Apollo. She is also the producer-director of 2019’s The Remix: Hip Hop X Fashion on Netflix and directed All In: The Fight for Democracy, a film about the history of voter suppression. The documentary highlights the many ways that voter suppression persists around the country despite the myriad laws on the books to keep Black, brown and poor voters from being disenfranchised.

“We made All In: The Fight For Democracy to look at who gets to participate in our democracy, and who is pushed aside,” Cortes told theGrio. “How can we all fight back? Voting is the cog that makes the machinery of democracy work — and if the machinery breaks for some, it will eventually break for all.

She adds: “Many of the problems we have seen over the past several elections are rooted in an issue that has plagued our country from its founding. From our nation’s beginning, laws were designed to suppress certain segments of the population. Voter suppression is a nonpartisan human rights issue, which if solved, would amplify the voices of the disenfranchised and strengthen our democratic
republic.

As Stacey Abrams says, “Voter turnout is the best remedy to voter suppression.” 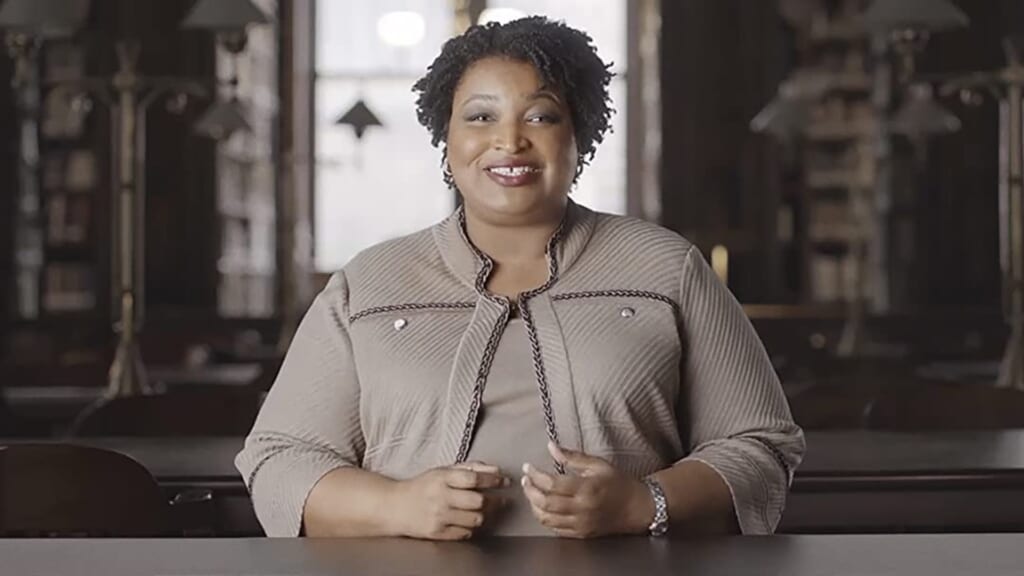 Abrams details her fight to win the gubernatorial race in 2018 in Georgia and how it was tainted by voter suppression tactics that helped ultimate victor Brian Kemp into the governor’s mansion in a hotly contested election. Former Attorney General Eric Holder and journalist Ari Berman, among others, talk about how voter suppression continues to play a role in elections at the local, state, and federal levels.

The Universal Hip Hop Museum is still building their home in the Bronx, New York, where hip-hop emerged in the 70s and until then they continue to build bridges with the community. They are hosting this event with Cortes and panelists Rocky Bucano, executive director and president of the Universal Hip Hop Museum, Angela Lang, executive director of BLOC, community organizer Rosa Clemente,
journalist and hip-hop activist, Kevin Powell, famed New York writer, activist, and founder of the Young Lords, Felipe Luciano, Chuck D of Public Enemy and Dayton, Ohio born rapper Yellopain who released the song “My Vote Don’t Count” earlier this year.

The panel takes place on Friday, Oct. 30 starting at 6 p.m. You can view the panel HERE. Afterward, All In: The Fight for Democracy will be available for free from Oct. 30 through to Sunday, Nov. 1 on Amazon Prime’s YouTube channel.

Tuchel after 2:2 with Bordeaux: I always protect the players, but I refuse to do this. You can't play matches of this level
Ole Gunnar Solskjaer: Any decision I make is for the good of Manchester United. The main thing is the result
Mourinho on Tottenham: We don't have the same conditions as some clubs. They create a crazy market
Hazard was injured for the 8th time in 16 months at Real Madrid. He had 12 injuries in 7 years at Chelsea
Frank Lampard: Abramovich is a man who achieves his goals. Without this, it is impossible to achieve his position
Marcelo was actually grabbed by the hair. Clear penalty. Ex-referee Iturralde Gonzalez on the controversial episode in the match of Real Madrid
Gasperini on Atalanta's defeat: the Players are tired. We pay more for national team games than for the Champions League
Source https://thegrio.com/2020/10/29/hip-hop-museum-and-all-in-director-get-together-to-get-out-the-vote/