Prosecutors in Connecticut said on Friday said that they would not retry Michael C. Skakel for the murder of his 15-year-old neighbor, ending a case that transfixed much of the country and went all the way up to the United States Supreme Court.

In 2002, Mr. Skakel, a cousin of the Kennedys, was convicted of beating Martha Moxley to death with a golf club in 1975, when they were both 15 and living in Greenwich, Conn.

In 2018, his conviction was overturned by the state’s highest court.

On Friday, prosecutors said they did not have enough evidence to try Mr. Skakel again.

“It is my belief that the state cannot prove this case beyond a reasonable doubt,” Richard Colangelo Jr. said on Friday in State Superior Court.

He said that of 51 potential witnesses, 17 were dead and there was no additional forensic evidence in the case.

Mr. Skakel, now 60, was initially sentenced to 20 years to life for murder and spent more than a decade behind bars. He was released in 2013 after a judge vacated the sentence, ruling that his lawyer had not provided effective representation.

In 2016, the State Supreme Court reinstated the conviction but later reviewed its decision after a request from the defense.

In 2018, the same court said that Mr. Skakel’s lawyer, Michael Sherman, did not present evidence of an alibi. The court called Mr. Sherman’s failure to obtain such evidence “constitutionally inexcusable.” It said that it undermined “confidence in the reliability” of the conviction.

The announcement by prosecutors of their decision on Friday coincided with the 45th anniversary of the killing, which set off decades of speculation and legal twists and turns that became fodder for tabloids, books and television movies.

Martha Moxley, 15, fails to show up at home after roaming her neighborhood in Greenwich with friends. Her body is found bludgeoned and stabbed, half-hidden beneath pine trees. A broken golf club found nearby is believed to have been used in the killing. The murder rattles the town, which is considered extremely safe.

Nearly two years after the teenager’s death, many Greenwich residents wonder why a broad police investigation has yielded no arrests. Martha was last seen alive on the lawn of a friend, Thomas Skakel, 17, Michael’s older brother. The brothers are nephews of Ethel Skakel Kennedy, the widow of Robert F. Kennedy. The police trace the golf club used in the killing to the collection of the Skakel family. Thomas and another young man are considered suspects, though both pass lie detector tests.

For two years, Michael Skakel attends the Elan School in Poland Spring, Maine, a private institution which, at the time, catered to children with mental health and substance abuse problems. According to numerous accounts, Mr. Skakel blurted out during a group-therapy session that he had killed Ms. Moxley. But Joe Ricci, the school’s owner, denied that such a confession had occurred.

A book written by Mark Fuhrman, a former Los Angeles police detective known for his role in the O.J. Simpson case, singles out Mr. Skakel as the likely killer, reigniting interest in the case two decades later.

The State of Connecticut appoints an investigator and a one-man grand jury in the Moxley case. Soon after, a possible break in the investigation surfaces when a former suspect, Kenneth Littleton, who lived next door to Martha Moxley, testifies before the grand jury in exchange for immunity. The focus now falls on Thomas and Michael Skakel, but both deny involvement in the killing. Then a close Skakel family friend and a neighbor of Martha’s, Mildred Ix, talks to the grand jury. Her daughter, Helen, then 15, had been with Martha, Thomas and Michael, then 15, the night of the killing. 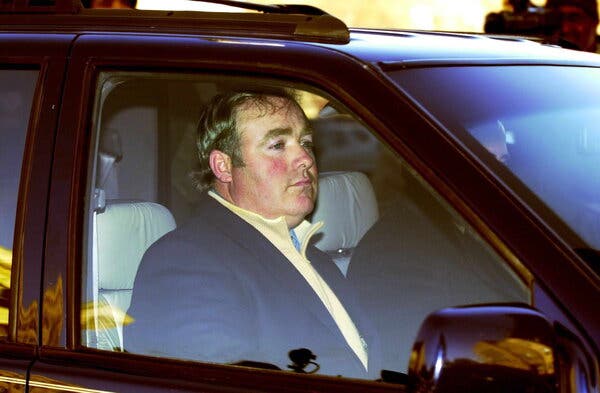 Amid a huge news media stakeout reminiscent of the Simpson trial, Mr. Skakel appears in court to face the charge that he murdered his neighbor. After the hearing concludes, he walks to the railing by the first row of spectators and stands face-to-face with Ms. Moxley’s mother, Dorthy. “I feel your pain,” he says, looking Mrs. Moxley in the eyes. “But you’ve got the wrong guy.”

Two witnesses who were both former classmates of Mr. Skakel’s at the Elan School testify. One of them, John D. Higgins, describes a confused and tearful admission in which Mr. Skakel said he had only fragmented memories of the crime. The other witness, Gregory Coleman, says Mr. Skakel brazenly told him: “I am going to get away with murder. I am a Kennedy.”

A judge orders Mr. Skakel to be tried as an adult, noting that Connecticut’s juvenile system was not equipped to punish a 40-year-old defendant. Mr. Skakel was charged as a juvenile because he was 15 at the time of the killing. Conviction as an adult could carry a life sentence, while conviction by a juvenile court judge would mean little or no jail time.

During the trial, the jury is offered no direct physical evidence linking Mr. Skakel to the crime but hears testimony about incriminating statements and erratic behavior from over the years. As the clerk polls each juror, the victim’s mother, Dorthy Moxley, and her son, John, clutch each other in their front-row seats, astonished smiles on their faces, tears in their eyes.

The mother of Martha Moxley, Dorthy, in 2002, addressing the news media in Norwalk, Conn..Credit...Douglas Healey/Associated Press

After he tearfully insists that he is innocent, Mr. Skakel is sentenced to a prison term of 20 years to life. Just before the sentencing, he gives a rambling 10-minute statement full of biblical references, proclaiming his innocence and his faith in God. It was the first time he had spoken during his trial.

Dorthy Moxley leaving the courthouse in June 2002 after Mr. Skakel was convicted in the murder of her daughter, Martha. Credit...James Estrin/The New York Times

Mr. Skakel’s lawyers challenge the conviction on seven grounds, including whether the prosecution inflamed the jury by referring to the defendant as a “spoiled brat” and whether Mr. Skakel should have been tried as an juvenile since he was 15 at the time of the killing.

Ms. Moxley outside Stamford Superior Court in 2013. She said she still believed Mr. Skakel was “the one who swung the club” in her daughter’s killing.Credit...Christopher Capozziello for The New York Times

Hubert Santos, a lawyer for Mr. Skakel, tells a panel of six justices on the Connecticut Supreme Court that he deserves a retrial. The lawyer says that Mr. Skakel’s older brother, Thomas Skakel, was the most likely perpetrator of one of the state’s most notorious crimes.

State prosecutors say that Michael Skakel does not deserve a new trial and that his conviction should be reinstated.

The book explores what Mr. Kennedy says was a botched police investigation as well as prosecutorial misconduct, and plumbs alternate theories of who killed the girl. It claims to have definitively solved the murder, identifying two Bronx teenagers.

The Connecticut Supreme Court, acting on a defense request to review its 2016 decision, reverses itself and vacates the murder conviction. The justices rule, 4 to 3, that Mr. Skakel’s lawyer, Michael Sherman, should have presented evidence of an alibi. A retrial is possible.

The United States Supreme Court denies the prosecutors’ attempts to revive Mr. Skakel’s conviction. Other than retrying Mr. Skakel, it was the prosecutors’ last chance to keep the case alive. They had argued that the U.S. Supreme Court should be able to address the decision by the state court because the decision was “grounded exclusively on federal constitutional law.”

The decision by the U.S. Supreme Court not to hear the prosecution’s appeal means the state court’s ruling stands.

Mr. Skakel walks out of a Connecticut courthouse a free man after prosecutors announce that they do not have enough evidence to try him again.

His lawyer, Stephan Seeger, calls the decision the “right result.”

“Michael Skakel was innocent then, he’s innocent now,” Mr. Seeger says. “It’s no stretch of the imagination that they can’t prove the case within a reasonable doubt. It’s not simply a technicality that ends the case.”

Dorthy Moxley, Martha Moxley’s mother, says she still believes Mr. Skakel killed her daughter but that she does not need for him to spend any more time in prison.

“I will never forget the day they found him guilty,” Ms. Moxley says. “It gave me all the sense of justice I needed.”

Wilshire about the lack of Ozil in the application of Arsenal: I'm surprised. He can play for any club in the Premier League
What to read about Maradona: how the Church named after Diego appeared, why he admired an unknown football player, how he got involved with drugs
God is dead. Sports media of the world mourn Maradona
Mourinho about Klopp's words about dissatisfaction with the Premier League calendar: He came in 2015, I-in 2004. Nothing changes
Chelsea want to activate the option to extend their contract with Silva. The club is happy with the defender
Zidane adapted perfectly to the losses and outsmarted Conte in everything. Hazard finally lit up in the top match
Nani: the Fans love Bruno. He is not afraid to take risks and only thinks about the success of Manchester United
Source https://www.nytimes.com/article/skakel-moxley-murder-case.html