(CNN)At a news conference held in the hours after the Boston Marathon bombing in 2013, a man asked then-Gov. Deval Patrick whether the attacks had been carried out by the US government as part of a plot to clamp down on civil liberties. The governor, who had spent the day scrambling to respond to the crisis and begin coordinating the search for the perpetrators, dismissed the question with a quick "no." 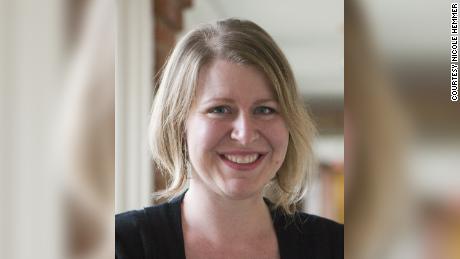 The man who asked whether the horrific bombing was "another false flag staged attacks" was Dan Bidondi, a radio host for Alex Jones's InfoWars. At the time, InfoWars was considered a far-right crackpot site with little relevance to US politics, the Westboro Baptist Church of right-wing media: seizing on people's worst moments of grief and pain to thrust their own obscene, inhumane politics into the spotlight.
While Jones still remains on the fringes of US politics, the InfoWars approach has since then become part of the mainstream right. In the two months since the January 6 insurrection at the Capitol, conservatives in media and Congress have sought to rewrite the events of the day. As new reports from the New York Times and Washington Post show, much of the right has embraced the conspiracy theory that the insurrection was a false-flag event, an effort by undercover anti-fascists to smear and discredit the Trump administration and the movement that supports it. While that is not remotely true, it has quickly become an article of faith, evidence that the InfoWars-ification of the right is nearly complete.
The efforts to propagate a false narrative of January 6 began even as the insurrection was still in process. As I wrote at the time, Todd Herman, the guest host for the Rush Limbaugh Show, immediately began processing news of the violence and disorder as evidence that leftists had infiltrated the crowd. "It's probably not Trump supporters who would do that," he told his audience. "Antifa, BLM, that's what they do."
A few hours later on the floor of the House, Rep. Matt Gaetz repeated the lie that some of the rioters were "masquerading as Trump supporters and in fact, were members of the violent terrorist group Antifa." In testimony on Tuesday, FBI Director Christopher Wray underscored that the Antifa conspiracy was false, telling the Senate Judiciary Committee, "We have not, to date, seen any evidence of anarchist violence extremists or people subscribing to Antifa in connection to the 6th."
Though a number of conservatives (including high-profile ones like Sen. Mitch McConnell) reject the false-flag conspiracy, it has been trumpeted by enough well-known figures -- from Reps. Paul Gosar and Mo Brooks to Fox News's Laura Ingraham and Sean Hannity -- that half of Republicans in a January survey said that Antifa activists were responsible for the Capitol insurrection, even though almost every single one of the nearly 300 rioters who have been arrested are open Trump supporters. The Oregon Republican Party recently passed a resolution stating, "The violence at the Capitol was a 'false flag' operation designed to discredit Republican Trump, his supporters, and all conservative Republicans."
The idea of false flag conspiracies, once isolated to InfoWars broadcasts and internet message boards, has been creeping into the Republican mainstream over the past several years. They began to break through in 2018, when someone began sending bombs to prominent Democratic leaders, including Barack Obama, Bill and Hillary Clinton and Eric Holder. Jacob Wohl, who runs the conspiracy and hoax site Gateway Pundit, tweeted out that the stories about the bombs "are false flags, carefully planned for the midterms."

That conspiracy quickly filtered out on Reddit, Facebook, and Twitter, and then Fox News and talk radio. Lou Dobbs, the pro-Trump host on Fox Business, tweeted (and deleted), "Fake News—Fake Bombs. Who could possibly benefit by so much fakery?" Geraldo Rivera and guests on "Fox & Friends" also repeated the false flag conspiracy on air.

Conspiracies have long been part of right-wing politics: That Franklin Roosevelt knew in advance about the Pearl Harbor attack but did nothing so he could drag the US into World War II; That Dwight Eisenhower was a "conscious, dedicated agent of the Communist Conspiracy."; Lyndon Johnson conspired to have John Kennedy assassinated.; Bill and Hillary Clinton killed their friend, Vince Foster. Each of these utterly false conspiracies had their adherents in the right-wing media of their era, in books like "The Final Secret of Pearl Harbor" and "A Texan Looks at Lyndon" to the magazines and radio hosts and even the Wall Street Journal editorial page who pushed the Foster lie in the 1990s.

As conservative media became more powerful, right-wing politicians began to amplify their conspiracies. But false-flag conspiracies remained on the fringes, in part because conservatives had other ways to distance themselves from right-wing violence. After the Oklahoma City bombing in 1995, blame fell on outlets like "The Rush Limbaugh Show" for stoking an atmosphere of violence. Limbaugh shot back that it was liberals like Clinton "calling those people involved in legitimate political dialogue 'extremists'" that led to political violence. But he did not blame the left for the bombing itself. That idea -- that the US government had bombed the building -- was limited to far-right and white supremacist message boards.

Over the past decade, the landscape has begun to change. As right-wing media outlets have become the de facto messaging arm of the Republican Party, politicians have increasingly learned to speak their language, even as those outlets move further and further right. And the rise of Trump played an important role as well, demonstrating that there was no political price to be paid for spreading conspiracies -- demonstrating, in fact, that it could be a viable path to the presidency. So it should come as no surprise that politicians eyeing a political future in the party would embrace the conspiracies fueling its base, even if it means transforming the Party of Lincoln into the Party of Alex Jones.

Ex-head of Loko Naumov on Nikolic: I can't fully praise him yet. There are 5 important games left
I don't think Barcelona is any better. Koeman on the fight for the La Liga title with Real Madrid, Atletico and Sevilla
Koeman on Minges: In Barca, you should always play actively. Pedri, Araujo also played below their level
Ronald Araujo: For Barca, all matches are finals. We won Getafe-this is the main thing
Messi gave a penalty to Griezmann with a double against Getafe-Antoine scored
Barcelona won 7 of the last 8 La Liga matches-lost to Real Madrid
Semin about the Super League: European football has the fairest traditions