'I don't understand why this president is unwilling to take on Putin': Biden debate slam goes viral 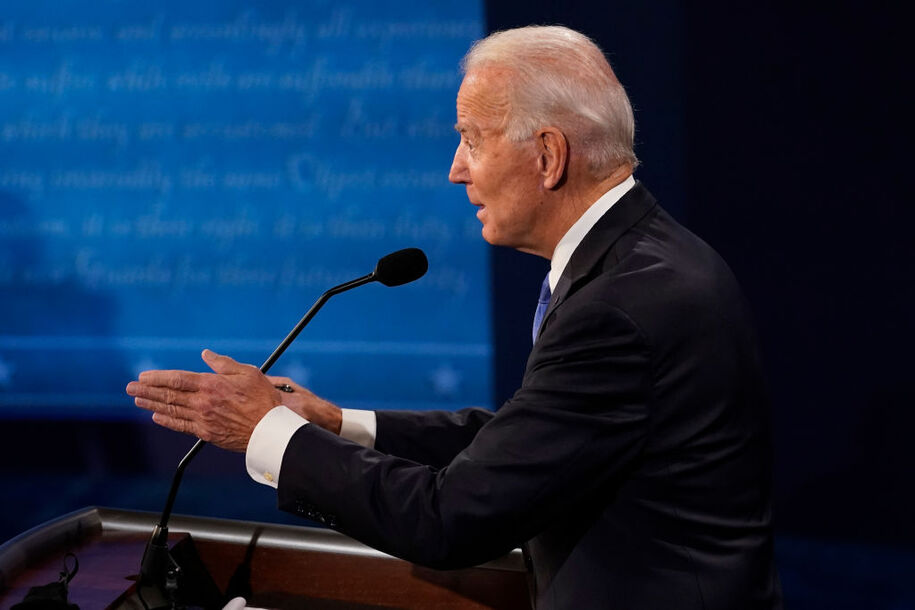 The final debate of the 2020 presidential election opened with a predictable start:&nbsp;while former Vice President Joe Biden wore a mask on stage&nbsp;and removed it while approaching the podium, Donald Trump entered the stage without one.&nbsp;NBC News’ Kristen Welker is moderating this debate, which you can check out free on various sites, including C-SPAN’s YouTube channel. The debate opened with the candidates discussing the novel coronavirus pandemic, and Biden came out with an absolutely excellent blow to Trump’s efforts to downplay the ongoing severity of the pandemic. When Trump suggested people were learning to live with the virus, Biden quickly pointed out that, “People are learning to die with it.” That hasn’t been Biden’s only quick—and necessary—retort of the night, however.&nbsp;

Biden spoke clearly and seriously about election interference concerns, including Iran, Russia, and China. None other than Rudy Giuliani&nbsp;even got a mention, in being described as a “Russian pawn.”&nbsp;The clips are going viral on Twitter and are well worth a watch.

Here is the longer cut.

“I made it clear that any country no matter who it is that interferes in American elections will pay a price," Biden says.

“I don’t understand why this president is unwilling to take on Putin” when he’s putting bounties on the heads of American soldiers” #Debates2020 pic.twitter.com/zLNYthieRS

In part, Biden opens by saying, “I made it clear that any country no matter who it is that interferes in American elections will pay a price. They will pay a price. And it’s been overwhelmingly clear in this election, I won't even get into the last one, this one … that Russia has been involved. China’s been involved to some degree. And now, we learn that Iran is involved. They will pay a price if I’m elected. They’re interfering with American sovereignty. That's what's going on right now. They're interfering with American sovereignty. And to the best of my knowledge, I don’t think the president has said anything to Putin about it. I don’t think he’s talking to him a lot. I don’t think he’s said a word. I don’t know why he hasn’t said a word to Putin about it. And I don't know what he has recently said, if anything, to the Iranians. My guess is he’d probably be more outspoken with regard to the Iranians. But the point is this, folks. We are in a situation where we have foreign countries trying to interfere in the outcome of our election.&nbsp;”

Biden then mentioned Trump’s own national security’s advice, then hesitated, saying he shouldn’t get into it, then continued. The subject? Rudy Giuliani.

Here is that clip.

Here is what Biden said.

“His buddy, Ruddy Giuliani, he’s being used as a Russian pawn. He’s being fed information that is Russian … that is not true. And then what happens? Nothing happens. And then you find out that everything going on here about Russia is wanting to make sure that I do not get elected the next president of the United States. Because they know I know them. And they know me. I don’t understand why this president is unwilling to take on Putin when he’s actually paying bounties to kill American soldiers in Afghanistan. When he’s engaged in activities that are trying to destabilize all of NATO. I don’t know why he doesn’t do it, but it’s worth asking the question. Why isn’t that being done? Any country that interferes with us will, in fact, pay a price because they’re affecting our sovereignty. “

Biden also reigned it in and pointed out to viewers that “It’s not about his family and my family. It’s about your family.”

Dybala has not scored any points in this season's Serie A, he has played 6 matches
Giroud has 6 goals in his last 4 games. He has scored in his last 6 games in Chelsea's Premier League start
Solskjaer Pro 3:1 with West ham: Very happy with the game. Manchester United is getting more stable
Marcus Rashford: Manchester United will win more with more dry matches
Pirlo on 2:1 with Torino: after the break, we remembered that giving everything and sacrificing yourself is in the DNA of Juve
Juve have no defeats in the Serie A season: 5 wins, 5 draws
Ronaldo did not score in a Serie A match for the first time in the season. There were 8 goals in 5 games
Source https://www.dailykos.com/stories/2020/10/22/1988806/--I-don-t-understand-why-this-president-is-unwilling-to-take-on-Putin-Biden-debate-slam-goes-viral