As millions of Americans gather today for the Thanksgiving holiday, the fact that the feast commemorates the disenfranchisement of indigenous people is becoming more and more apparent.

As the country has faced racial reckoning from marginalized communities like African Americans and Latinos, native Americans are fighting to remain a part of the national conversation about ratifying injustices. 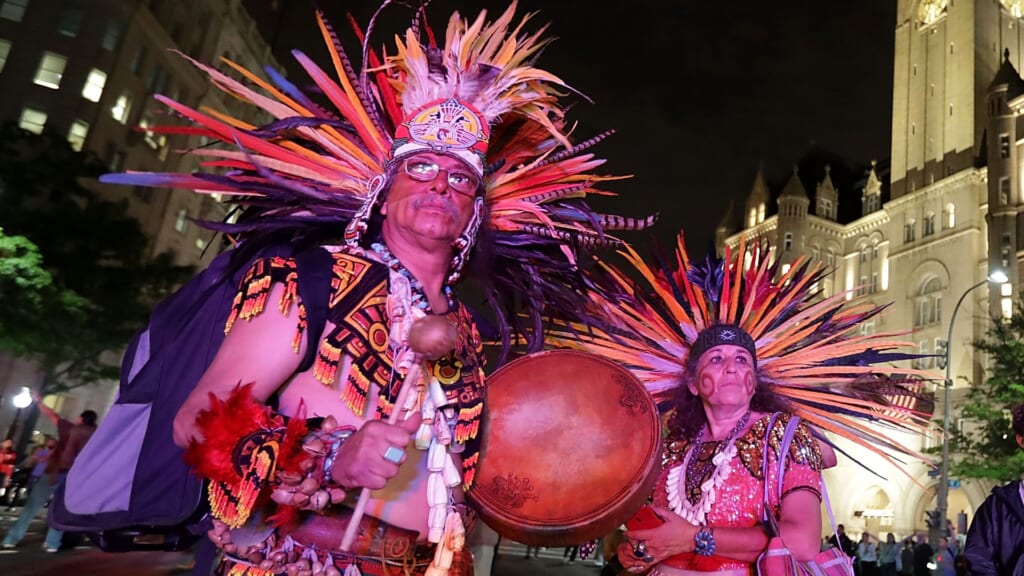 Guillermo Rosette and Linda Velarde join hundreds of other native Americans and their supporters in a traditional round dance at a 2017 protest in front of the Trump International Hotel in Washington, D.C. (Photo by Chip Somodevilla/Getty Images)

Descendants of the Mashpee Wampanoag tribe, which is at the center of the Thanksgiving legend, are fighting to reclaim what they maintain was stolen land.

According to a CNN report, “the Mashpee Wampanoag have lived in what’s now Massachusetts and eastern Rhode Island for more than 12,000 years.”

The tribe is currently in a battle to maintain a trust that turned 300 acres of land into a reservation.

The trust status meant the land couldn’t be taken away from the Mashpee Wampanoag without the approval of the federal government. It also gave the tribe sovereignty, allowing it to build housing, a school and a police department on the land, CNN reports.

However, under the administration of President Donald Trump, the Department of the Interior reversed that decision after a lawsuit brought by area residents, saying the land was ineligible for trust status because the Mashpee Wampanoag tribe wasn’t under federal jurisdiction in 1934.

The U.S. moved to take the land out of trust, endangering the health, housing and safety of the tribe.

A federal judge blocked the decision, but the Interior Department appealed, and that the appeal is still pending.

The Mashpee Wampanoag are not the only tribe fighting for their land in this country. The Wiyot tribe is battling the state of California for protections of the Duluwat Island, where they dwell. The area has been transformed and polluted by shipping businesses.

In Oklahoma, the Wyandotte Nation got their land back from the United Methodist Church after two centuries.

So, as families and friends gather to celebrate this year — hopefully in smaller groups, as recommended, because of the coronavirus pandemic — it is ever-important that the indigenous souls at the center of Thanksgiving, people who are still fighting for freedom in America, never be forgotten.

Kier and Diaz may miss Milan's match with Bologna due to injuries
Gasperini on 3:2 with Lazio: It was fun, wasn't it? It seemed that the relegation complicated everything, but we scored
Jose Mourinho: Van Dijk cannot be replaced. Van Dijk can only be replaced by van Dijk when he returns
Mikel Arteta: Ødegård young but already played at the top level. It's great that Arsenal were able to sign him
Ex-Manchester United and Borussia midfielder Kagawa has joined PAOK
Thomas Tuchel: Chelsea will play bravely and in an attacking manner
Zoomers should be provided with exciting tournaments. In the top 5 leagues, there are 1,826 matches, in the Champions League - only 125. Agnelli on the future of football
Source https://thegrio.com/2020/11/26/thanksgiving-indigenous-tribe-land/

How to Get Republicans to Seriously Fight Climate Change

What They Really Mean by ‘Equity’

DC rioter told friend: ‘I’d storm the Capitol for you any day’

Alcohol and your heart: Just getting a buzz can trigger an irregular rhythm

US puts hold on foreign arms sales, including F-35s to UAE

Should you pay extra for your employer's group life insurance?

Spain running short of vaccines due to delivery delays

Geophysicist who stormed Capitol claimed to be a ‘patriot warrior’: feds

The Fairness Doctrine sounds a lot better than it actually was

Is Alev Ayden the father of Halsey’s baby?

Romelu Lukaku and Zlatan Ibrahimovic in nasty field fight: ‘F–k you and your wife’

No hope left for Silver — yay!

A big hurdle for older Americans trying to get vaccinated: Using the internet

Trump impeachment lawyer speaks out: 'I'm not worried what other people think'

With New US Leadership, Analysts See Hope for Yemen

We Cannot Rely Exclusively on Vaccines to End the Pandemic

Best home office decor ideas: How to revamp your space in 2021

DHS: US under 'heightened threat environment’ amid concerns over ‘violent riots’

Covid-19 numbers are dipping in the US, even as variants are lurking and the vaccine rollout lags

What happened when a beloved mom influencer donated to Trump

This car maker says it topped 300 mph once before. But it's not so easy to do it again

Is It REALLY Possible My Husband Is OK With Me Skipping This Part of Sex?

‘On The Rocks’ Star Marlon Wayans On The Art Of Portraying Deceptively Simple Characters, Memories Of ‘In Living Color’ And His Drive To “Do It All”

Tigress dies painful death in MP; Was trapped in a snare [Watch]

‘The Bold Type’ Renewed for Fifth and Final Season at Freeform

‘The Bold Type’ Renewed For Fifth & Final Season By Freeform

From Halsey to Beyoncé, See the Most Memorable Pregnancy Announcements of All Time

There's a new chill between the White House and the Kremlin

The U.S. faces heightened threats from violent domestic extremists in the wake of the Capitol breach, D.H.S. says.