Baghdad — At least 10 rockets targeted a military base in western Iraq that hosts about 2,000 U.S. troops on Wednesday, American and Iraqi military officials said. It was not immediately known if there were any casualties. The rockets struck Ain al-Asad airbase in Anbar province at 7:20 a.m., according to Col. Wayne Marotto, a spokesman for the U.S.-led military coalition.

The Iraqi military released a statement later saying the attack did not cause significant losses and that security forces had found the launch pad used for the missiles. An Iraqi official said it was found in the al-Baghdadi area of Anbar, speaking on condition of anonymity because they were not permitted to brief media.

There was no immediate claim of responsibility for the attack, but a similar, larger-scale rocket strike on the same base a year ago by Iranian-backed militias brought the U.S. to the brink of war with Iran. 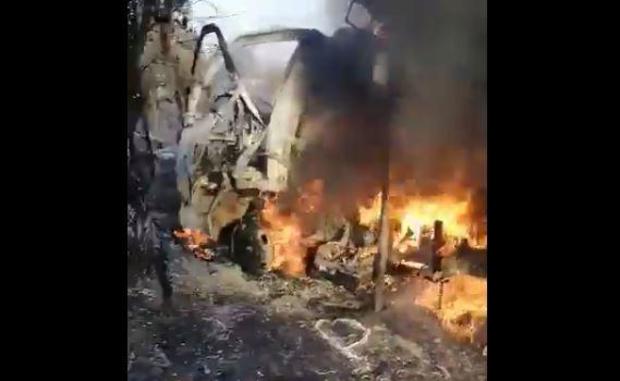 An image from video posted to Twitter by Mustafa al-Dulaimi shows what's left of a flatbed truck that Iraqi forces believe was used as a mobile launch pad to carry out a rocket attack on Ain al-Asad airbase in western Iraq, which hosts hundreds of U.S. forces, on March 3, 2021. Twitter/Mustafa al-Dulaimi

The rocket salvo on Wednesday was the first attack since the U.S. struck Iran-aligned militia targets along the Iraq-Syria border last week, killing one militiaman and stoking fears of a possible repeat of a series of tit-for-tat attacks that escalated last year, culminating in the U.S.-directed drone strike that killed Iranian Gen. Qassim Soleimani outside the Baghdad airport.

Wednesday's attack targeted the same base that Iran struck with a barrage of missiles in January last year in retaliation for the killing of Soleimani. Dozens of U.S. service members were injured, suffering concussions in that strike. As David Martin reported for "60 Minutes," the strike was the largest ever ballistic missile attack against Americans.

His report for "60 Minutes" gave a first-time look at drone video of the attack and he spoke with some of the American troops who were there on the night that brought the U.S. and Iran closer than ever to all-out war.

Denmark, which also has troops at the base, condemned the attack, saying that coalition forces at Ain al-Asad are there at the invitation of the Iraqi government, helping to bring stability and security to the country.

"Despicable attacks against Ain al-Asad base in #Iraq are completely unacceptable," Danish Foreign Minister Jeppe Kofod tweeted. The Danish armed forces said two Danes, who were in the camp at the time of the attack, are unharmed.

Denmark remains committed, will coordinate closely with our partners and allies.#dkpol

Wednesday's attack comes two days before Pope Francis' is scheduled to visit Iraq in a much anticipated trip that will include Baghdad, southern Iraq and in the northern city of Erbil.

Last week's U.S. strike along the border had been in response to a spate of rocket attacks that targeted the American presence, including one that killed a coalition contractor from the Philippines outside the Irbil airport.

After that attack, the Pentagon said the strike was a "proportionate military response" taken after consulting coalition partners.

Marotto said the Iraqi security forces were leading an investigation into the attack on Ain al-Asad.

U.S. troops in Iraq significantly decreased their presence in the country last year under the Trump administration. The forces withdrew from several Iraqi based across the country to consolidate chiefly in Ain al-Asad and Baghad.

Frequent rocket attacks by the Iranian-backed militias that operate in Iraq, targeting the heavily fortified Green Zone that houses the U.S. Embassy, during President Donald Trump's time in office frustrated the administration, leading to threats of embassy closure and escalatory strikes.

Ex-head of Loko Naumov on Nikolic: I can't fully praise him yet. There are 5 important games left
I don't think Barcelona is any better. Koeman on the fight for the La Liga title with Real Madrid, Atletico and Sevilla
Koeman on Minges: In Barca, you should always play actively. Pedri, Araujo also played below their level
Ronald Araujo: For Barca, all matches are finals. We won Getafe-this is the main thing
Messi gave a penalty to Griezmann with a double against Getafe-Antoine scored
Barcelona won 7 of the last 8 La Liga matches-lost to Real Madrid
Semin about the Super League: European football has the fairest traditions