The conditions seemed ripe for disaster.

Gusting Santa Ana winds had grounded water-dumping aircraft for hours, and flames were spreading across a tinder-dry fuel bed. Downwind sat a tangled maze of suburban streets where more than 80,000 people were ordered to evacuate.

Had this week’s Silverado fire began anywhere else, and at any other time, firefighters said it could have been the latest disaster in California’s busiest fire year on record — a time when firefighting resources have been stretched perilously thin. 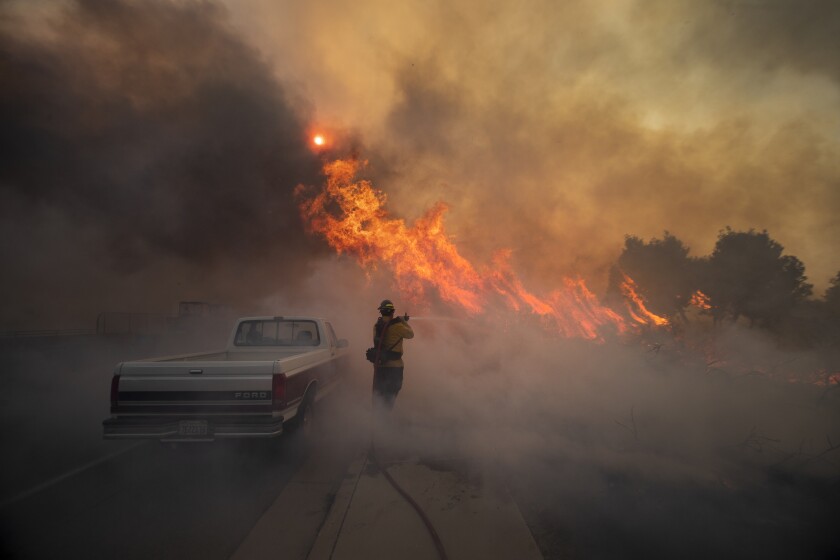 But this latest fire started on the outskirts of master-planned Orange County, where the roads are smooth and wide, communities were built under the state’s most recent fire code and the largest regional firefighting force in the world was at the ready and just a phone call away.

Despite 45-mph gusts launching embers into the suburban sprawl, where cars sat bumper to bumper trying to flee the oncoming flames, not a single home was lost or seriously damaged. In the end, thanks to a semi-formal agreement among the region’s biggest fire departments and the first-ever use of the world’s biggest, fastest water-dropping helicopter at night, crews were able to stand their ground, keeping the flames largely north of Portola Parkway, a major road that divides the subdivisions of Irvine from the backcountry.

“In some ways, we got a little bit lucky,” said Orange County Fire Chief Brian Fennessy.

In a year when firefighters have lost so many battles — in part because the number of blazes has stretched firefighting resources — this firefight and a second battle that began hours later in Yorba Linda could be considered successes, officials said.

When the Silverado fire began, about a third of Orange County’s firefighters were in their last hour of a two-day shift and were about to be replaced, in essence, putting twice as many firefighters at the ready than would typically be available, Fennessy said. As the chief headed to department headquarters down Portola Parkway that morning, he managed to come across the fire the moment it jumped the road and moved toward the subdivisions, giving commanders on-the-ground intel of where the fire was and how it was behaving. An Orange County firefighter stands ready to defend a home as the Silverado fire approaches in an Orchard Hills neighborhood of Irvine.

“I just got off the phone with the [operations] chief, he’s telling me the fire is still high up on the hill and right in front of me the fire is coming up the road,” Fennessy said. “Like so many of these fires, they show up so much faster than people think.”

Fennessy pulled into the neighborhood and, along with one Irvine police officer, began urging residents to flee, he said. At one point the chief jumped out of his vehicle, grabbed a nearby fire extinguisher and put out a spot fire burning next to a home, video on his cellphone shows.

As authorities cleared out the neighborhoods, a surge of crews were headed into the area thanks to a pact reached among Orange, Los Angeles and Ventura counties and the city of Los Angeles. Fire chiefs in those districts had all agreed to help one another in dire situations, avoiding the state’s usual mutual aid system because it’s viewed as being slow to dispatch resources.

Fennessy reached out to his peers and within an hour of the call, had 25 engines racing to help. More crews flowed into the county in the following days. More than 2,200 firefighters arrived overall.

Had either of these fires erupted in August or September, when firefighters and equipment were busy battling record wildfires in the central and northern parts of the state, there’s no telling what could have happened, Fennessy said. When the Blue Ridge fire broke out in the afternoon in Yorba Linda, commanders were able to quickly divert firefighters to the new threat. Only one home was destroyed, while seven others were damaged. 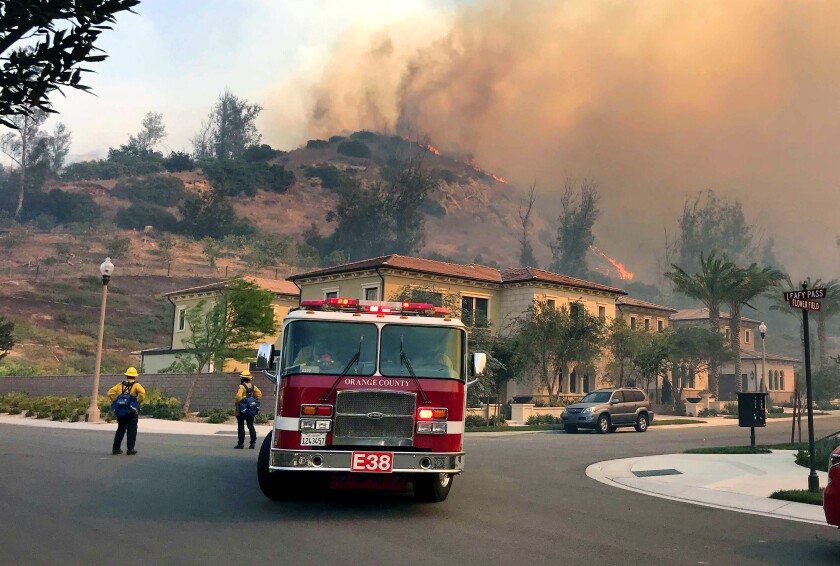 “All of us were stunned that there were only two fires,” Fennessy said. “We dodged a bullet in Orange County.”

Battling a wind-driven fire on the ground, and head-on, is a dangerous proposition, so hotshot crews worked the rear and sides of the fire to limit its spread while other firefighters took up positions in neighborhoods to protect homes from an onslaught of firebrands. Two hotshot crew members were critically burned in that initial attack on the fire’s flank and remain hospitalized.

Though aircraft were grounded for several hours in the morning, winds died down by the afternoon, according to National Weather Service data, and the aerial assault on the fires went into full swing. Air tankers caked the grass and shrub-covered hillsides with pink retardant while helicopters doused flare-ups with water — even at night.

“Southern California is an oddity in the world, you guys have a true air force down there,” said Mel Ceccanti, a pilot and director of flight operations for Coulson Aviation, a firefighting aviation company that holds contracts around the world and has crews stationed in Orange County for a three-month period this year. Orange County firefighters have to look away because of the hot wind, debris and approaching flames while defending homes in the Orchard Hills neighborhood of Irvine.

Throughout the first night of the Silverado fire, Ceccanti operated the company’s retrofitted CH-47 Chinook, a beast of a helicopter used by the Army that can fly 200 mph and drop 3,000 gallons of water or retardant at once — a payload on par with some fixed-wing tankers.

With night skies relatively clear and plenty of lakes and reservoirs in the area, Ceccanti was able to drop 47,000 gallons of water over four hours.

Though the fire burned through bone-dry vegetation, Orange County’s landscape is markedly different from the terrain in Northern California — a key advantage to firefighters.

There’s no timber-heavy forest to sustain fire for long periods of time, so while the light grass and shrubs can burn extremely hot and launch embers into the air, the fires go out just as fast as they begin, Fennessy said.

“It burns so frickin’ quick, the ember cast can only last for so long,” he said.

In retrospect, both Fennessy, who battled the 2007 firestorm in San Diego, and Ceccanti, who most recently flew over Australia’s massive bushfires, say the county caught a break this week. Had the fire reached Trabuco Canyon, it could have raged out of control as winds pushed it deeper into rugged terrain. Had the winds remained as strong as they were initially, aircraft wouldn’t have been able to help.

“We support ground firefighters, no matter how much you put on that fire, someone has to come through with a hose to put that fire out,” Ceccanti said. “If you bet the farm on aviation alone, you might catch yourself with your pants around your ankles.”

Bulykin on Loko's chances of reaching the Europa League play-offs: it Will be very difficult to do anything
Joao Felix: Atletico are missing Suarez and Costa
Loko didn't know what to do when Red Bull scored first. Naumov about 1:3
Gasperini about Atalanta: we will Go to Amsterdam with a small advantage
Striker Berisha Of Salzburg: We were better than Loko and deserved to win
Pep on city's 1st place in the Champions League group: we played very well in all the matches
Shakhtar defender Vitao on 2:0 with Real Madrid: the main Thing is not to fly too high in the clouds
Source https://www.latimes.com/california/story/2020-10-30/luck-was-on-the-side-of-orange-county-in-recent-fires