Isaias Unleashes Floods and Tornadoes As It Pummels the Atlantic Coast

WINDSOR, N.C. — Isaias pounded the Atlantic Coast on Tuesday with ferocious wind and driving rain, flooding communities, knocking out power for millions and spawning a series of tornadoes along its path.

Although it quickly weakened to a tropical storm, Isaias made landfall in North Carolina as a Category 1 hurricane and maintained a punishing level of power as it raked over the Eastern Seaboard, forcing a swath of the country — from the Carolinas to the Northeast — to grapple with its devastation.

In North Carolina, one tornado killed at least two people as it eviscerated a rural patch of roughly a dozen mobile homes, leaving only two standing. “The rest of them is pretty much gone,” the Bertie County sheriff, John Holley, told a local television station.

Officials throughout the storm’s path declared states of emergency and urged residents to stay out of harm’s way, underscoring the multitude of perils lingering in the storm’s wake.

A woman in St. Mary’s County, Md., was killed after a tree fell and crushed her vehicle as she drove; the authorities said it took several hours to remove the woman’s body from the wreckage. At least one other person was killed under similar circumstances in Queens, officials said, after the storm swept into New York City.

“At my direction, the state has activated all available resources to respond, and our team will continue to monitor the storm’s path,” Gov. Larry Hogan of Maryland said on Tuesday. “We urge Marylanders to heed all warnings, avoid travel if possible, and use common sense.”

More than three million utility customers along the storm’s path in North Carolina, Virginia, Maryland, Delaware, New Jersey, Pennsylvania and New York were without power Tuesday afternoon, according to Poweroutage.us, a website that tracks and aggregates reports from utilities. 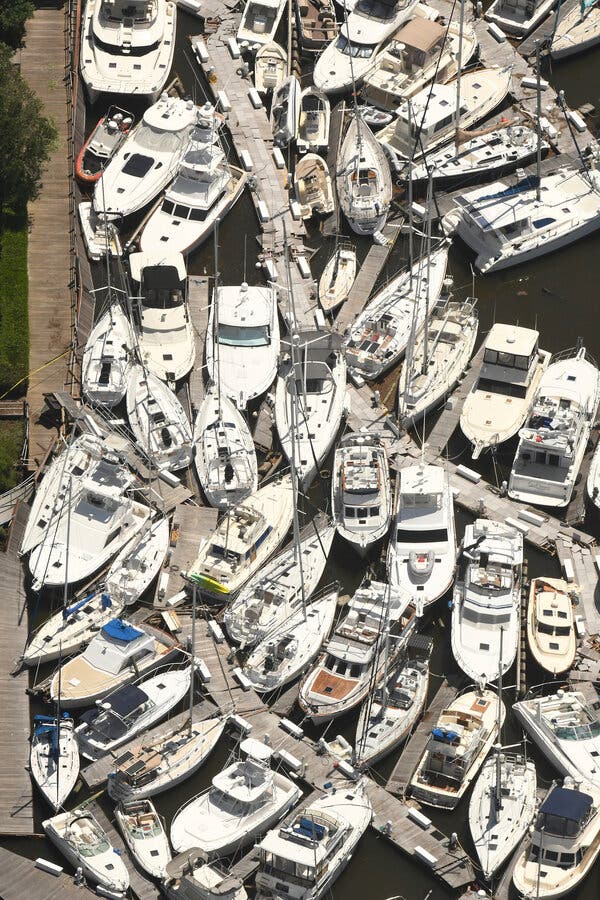 A marina in Southport, N.C., was damaged by the storm.Credit...Ken Blevins/The Star-News, via Associated Press

More than 1.3 million customers were without power in New Jersey, a number significantly higher than in any other state. In New York, more than 500,000 people lost electricity, and Pennsylvania and Connecticut each had at least 300,000 customers without power.

The projected path of the storm shifted slightly westward on Tuesday, giving New York City and the surrounding areas a slight reprieve from the heaviest expected rainfall. Tropical storm warnings reached as far up the Atlantic Coast as Martha’s Vineyard in Massachusetts, and a tornado watch was in effect throughout the day for New York City, Long Island, much of New Jersey and parts of Connecticut.

Forecasters warned of the possibility of flash floods across much of the Mid-Atlantic region by Tuesday evening, with “potentially life-threatening urban flooding” possible in Washington, D.C., Baltimore and other cities along and just west of Interstate 95, according to the National Hurricane Center.

Isaias, which is written as Isaías in Spanish and pronounced ees-ah-EE-ahs, mustered the strength to become a hurricane again as it churned off the coast, and the center of the storm made landfall late Monday in Ocean Isle Beach, N.C., after delivering only a glancing blow to Florida and largely sparing Georgia.

Morgan Strenk watched from her vacation home in Ocean Isle Beach as rising water flooded the streets and filled her basement. She said she stepped outside and smelled smoke; a fire had engulfed a house across the street and then spread to a neighboring house.

“The streets are just covered with debris,” she said. “A lot of houses right on the shoreline lost their stairs. There’s random pieces of furniture all over the place.”

Officials said that the storm’s rapid pace, moving as quickly as 35 m.p.h., helped to limit river flooding and allowed the authorities to mobilize swiftly to assess the toll.

“All in all, this storm got in, got out pretty quickly,” Gov. Roy Cooper of North Carolina said in an interview on “Good Morning America” on Tuesday. Because of that, he added, the damage was not “as great as it could have been.”

A series of tornadoes cropped up along its path as the storm barreled up the coast, including in southeastern Virginia and southern New Jersey. It is not uncommon for storms like Isaias to spawn tornadoes, created in the outer rain bands of hurricanes.

In Bertie County, N.C., in the northeast corner of the state, emergency workers contended with fierce wind and rain in the early morning darkness as they pulled people from their shredded homes. At least 12 people were hospitalized, the authorities said.

Dana White, who lives nearby, was jolted awake at 2 a.m. when a friend called to check on her. “When I got up, it would rain real hard and then just be real calm,” she said. “And then the wind would pick up, and the rain would blow in all different directions.”

Ed Goodwin, a Republican state representative, surveyed the aftermath in much of his district, which includes Bertie County. He noted the storm’s capriciousness, as some areas were virtually spared and others devastated.

He saw houses that had shingles shaved from their roofs and tin siding stripped off barns. But he said the residents of the mobile home community, known as Cedar Landing, would need the most help in the coming days.

“Not only have they lost their home and had the scare of their lives, they’ve also lost most of their earthly possessions,” Mr. Goodwin said.

He said that he knew the broader community would support them, in part because the threat of storms like Isaias is a recurring one and could hit anyone. “Only by the grace of God that could be I,” he said.

Greg Taylor and his son Carson surveyed a damaged part of the pier that washed ashore in North Myrtle Beach.Credit...Sean Rayford/Getty Images

Kathryn Abrams Dupree, who owns a barbecue restaurant in nearby Windsor, said a friend called her at 2:30 a.m. to tell her the restaurant had been damaged in the storm. When she arrived, she was alarmed by the severity, and said it would likely take weeks of work to renovate it.

“The windows were blown in,” she said, “ceiling blown out, the roof was lifted up, there was water standing everywhere.”

Yet she said she had a sense of perspective. She has employees who lived in the Cedar Landing and they were alive.

“We can replace this,” Ms. Abrams Dupree said of her battered restaurant. “We couldn’t replace them.”

Michael Venutolo-Mantovani reported from Windsor, and Rick Rojas from Atlanta. Reporting was contributed by Lucy Tompkins from Bozeman, Mont., and Will Wright and Mihir Zaveri from New York.

Liverpool and PSG offered contracts to Alaba, but the player chose Real Madrid. He dreamed of playing for Madrid
I believe in Zlatan. Ibrahimovic asked about Milan's chances of winning the Scudetto
Man City have yet to offer Aguero and Fernandinho contract extensions
Frank Lampard: Chelsea do not have Hazard, who accounted for 50% of goals and assists, and Diego Costa with 30 goals for the season
Let See ten Mangalica and we win the Champions League. The Milan newcomer was a nightmare for Messi, quarreled with Pep and was a favorite of Allegri
Real Madrid can sign Aguero, Giroud or Milik after Jovic's departure
Chelsea spent the most in Europe on transfers in 2020. Manchester United - 2nd, Man City-3rd
Source https://www.nytimes.com/2020/08/04/us/hurricane-isaias-updates.html