“By the way, so far, I respect very much the way you’re handling this. I have to say,” Trump remarked, stretching an open palm toward Welker’s desk inside the debate hall at Belmont University in Nashville, Tenn.

It was one of many moments throughout the 90 minutes of programming that Trump appeared to have at least partly heeded the advice of aides who encouraged him to take a less combative approach in dealing with his opponent and the moderator.

At several points, Trump accepted Welker’s prodding to move from one subject to the next, as well as her interjections amid his discursive broadsides. But Welker also pressed Biden directly on accusations related to his son’s foreign business dealings, pleasing some conservatives.

A few allies of the president expressed approval of Welker, with Jenna Ellis, the senior legal adviser to Trump’s campaign, assessing on Twitter that the journalist was “doing a decent job.”

But other Republicans, including American Conservative Union chair Matt Schlapp, criticized Welker’s interruptions of the president and complained that “NBC is in the bag for Biden.”

Ronna McDaniel, chair of the Republican National Committee, tallied that Welker interrupted Trump more than five times as much as she did Biden, and Mollie Hemingway, a senior editor at The Federalist, tweeted that Welker “is interrupting way too much.”

Overall, however, the debate did not resemble the fiery confrontation between Trump and Biden at their first forum last month, when Chris Wallace lost control of the proceedings. On Thursday night, Wallace conceded that he was “jealous” of Welker's debate.

“I would’ve liked to have been able to moderate that debate and to get a real exchange of views, instead of hundreds of interruptions,” he said. “I thought it was a good debate. A good, substantive debate.” 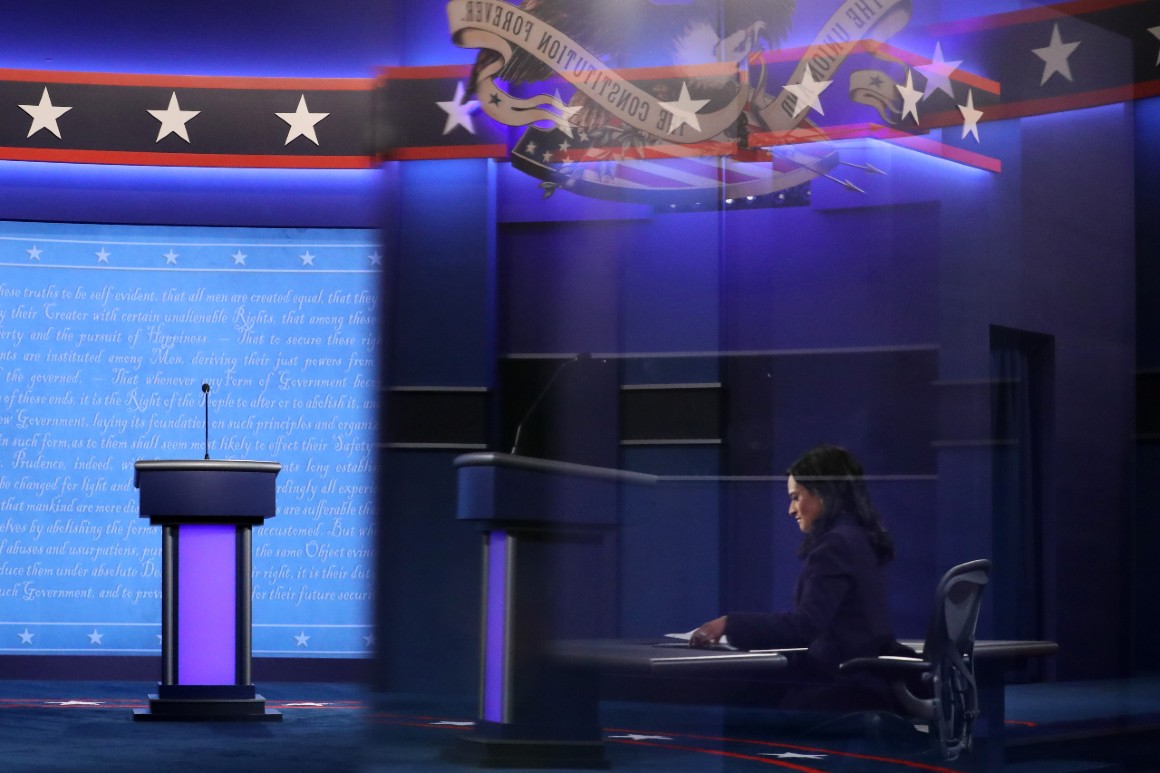 Welker’s well-received showing as referee of the final debate came in the closing days of a White House race that has seen moderators emerge as subjects of contention and controversy.

Even before he formally began battling Biden earlier this year, Trump had complained about the nonpartisan Commission on Presidential Debates ever since it acknowledged there was an audio snafu with his microphone during his first forum with Hillary Clinton in 2016.

In August, Trump’s personal attorney Rudy Giuliani submitted to the debate commission a list of two dozen potential moderators pre-approved by the campaign, consisting mostly of journalists regarded as friendly to the president in their coverage.

The commission ignored Giuliani’s suggestions, and when Trump and Biden met on stage for the first time last month, the moderator was Wallace. In that inaugural face-off, the president repeatedly bulldozed through the Fox News anchor’s questions and the Democratic nominee’s responses, offering a series of baseless claims.

The chaotic affair prompted the commission to consider format changes “to ensure a more orderly discussion,” and it was ultimately decided Monday that the candidates’ microphones would be muted during the two-minute opening remarks at the start of each 15-minute segment of the final debate.

Susan Page did not fare much better when she moderated the vice presidential debate earlier this month. Despite her pointed questions, Page failed to follow up on evasive answers by the candidates and was criticized for not doing more to stop Republican incumbent Mike Pence from interrupting Democratic running mate Kamala Harris.

The second presidential debate, originally scheduled to take place last Thursday, was thrown into doubt amid concerns over the president’s infectiousness following his testing positive for Covid-19. After Trump objected to the commission’s announcement that the debate would be conducted virtually, the event was scrapped completely as he and Biden booked dueling televised town halls on separate networks.

The second debate had also been complicated by an unfolding social media scandal involving C-SPAN’s Steve Scully, the planned moderator, who claimed his Twitter account was hacked after Trump’s allies seized upon some of his past posts. Scully admitted last week that he had not been hacked, and he was suspended from work.

Trump did not avoid tough questioning after the cancellation of the second debate, instead being grilled by “Today” show co-host Savannah Guthrie during an NBC town hall event last Thursday night that aired alongside Biden’s town hall on ABC. Trump in recent days has criticized Guthrie, whose tenacious efforts to pin down the president were applauded by pundits.

On Tuesday, two weeks from Election Day, Trump launched a public assault on another journalist, CBS News’ Lesley Stahl, after he shut down a testy interview with the well-respected “60 Minutes” correspondent at the White House. Trump tweeted a short clip of a maskless Stahl speaking with producers, and followed through Thursday on a threat to preemptively release video of their conversation.

But much of the president’s fury over the past two weeks has been trained on Welker, with Trump steadily ramping up his attacks before the final debate. The feud seemingly began last Monday, when Trump retweeted a false claim that the reporter had “mysteriously delete[d]” her Twitter account.

Although Welker apparently briefly deactivated her account after Scully lied about being hacked, it has since been restored and was accessible ahead of the debate Thursday.

In an interview with Newsmax last Wednesday, Trump called Welker a “disaster” and a “never-Trumper from NBC.” Trump first invoked her in a campaign rally setting on Saturday, telling supporters in Wisconsin that Welker was “extraordinarily unfair” and claiming that she had “deleted her entire account.”

On Monday, Trump described Welker as a “dyed-in-the-wool, radical-left Democrat” while speaking to reporters on an airport tarmac in Phoenix, and he went on to target her during a campaign rally later that day in Prescott, Ariz. “She’s been screaming questions at me for a long time, and she’s no good,” he said.

In a “Fox & Friends” interview Tuesday morning, Trump argued that Welker was “terrible,” “totally partisan” and “far worse than Scully.” He also claimed that “her father and mother are big supporters” of Biden and the Democratic Party, and have been “for a long time.”

Trump mentioned Welker’s parents again at a town hall event that aired Wednesday on the Sinclair Broadcasting Network, saying that they “supported the Democrats” and that Welker herself was a Democrat, adding: “I know her well.”

Federal Election Commission records do not show that Welker has donated money to any political candidates. But conservatives have promoted a New York Post report published Saturday noting that her parents have contributed to the Democratic National Committee and Democratic candidates including Biden.

The Post also reported that Welker previously registered as a Democrat in Washington, D.C., in 2012, and in Rhode Island in 2004. However, her current voter registration is not affiliated with any party.

Trump has not always appeared to have such a antagonistic attitude toward Welker. After she won the role of co-anchor on the weekend edition of NBC’s “Today” show in January, the president complimented the White House reporter at a news conference in Switzerland.

“Congratulations on your show,” he said. “They made a very wise decision.”

Griezmann on Messi: I admire Leo, and he knows it. We have a great relationship
Rooney on the possibility of a move to Barca in the 2010/11 season: Thinking about it. Could fit in perfectly
Hooray, in England they will let the audience into the stands again! While up to 4 thousand and not everywhere, but the clubs are happy 😊
Solskjaer about the match with Istanbul: these are the Champions of Turkey, it will be difficult
Gasperini on the nomination for the best coach of the year award: If we beat Liverpool, maybe I'll get a few votes
Julian Nagelsmann: Leipzig want to give PSG that final feeling they are talking about
Tuchel Pro Champions League: Match with Leipzig - the final of our group
Source https://www.politico.com/news/2020/10/23/kristen-welker-taming-force-trump-biden-showdown-431547