He left the field with his perfect record intact via a second-quarter TKO.

Murray’s Arizona Cardinals torched the Cowboys on their home turf, capitalizing on multiple Dallas mistakes en route to a 38-10 victory.

After a sloppy start by both offenses resulted in a scoreless first quarter, the Cardinals made the most of a pair of Ezekiel Elliott second-quarter fumbles, converting both into touchdowns to take a 14-0 lead.

When Murray found Christian Kirk on an 80-yard touchdown bomb to extend the lead to 21-0 before halftime, the hapless Cowboys were done.

If there was any second-half hope, an Andy Dalton interception on the first possession of the third quarter slammed the door shut.

Dalton couldn’t have written a worse script for his first start in place of injured starting quarterback Dak Prescott. But Monday’s loss wasn’t all on him. Elliott’s fumbles got the ball rolling for the Cardinals. A dropped touchdown by Michael Gallup in the second quarter extended the Cowboys’ woes.

“We’re the worst in the league taking care of football,” Dallas coach Mike McCarthy said. “... It's frustrating to see the pattern here.” 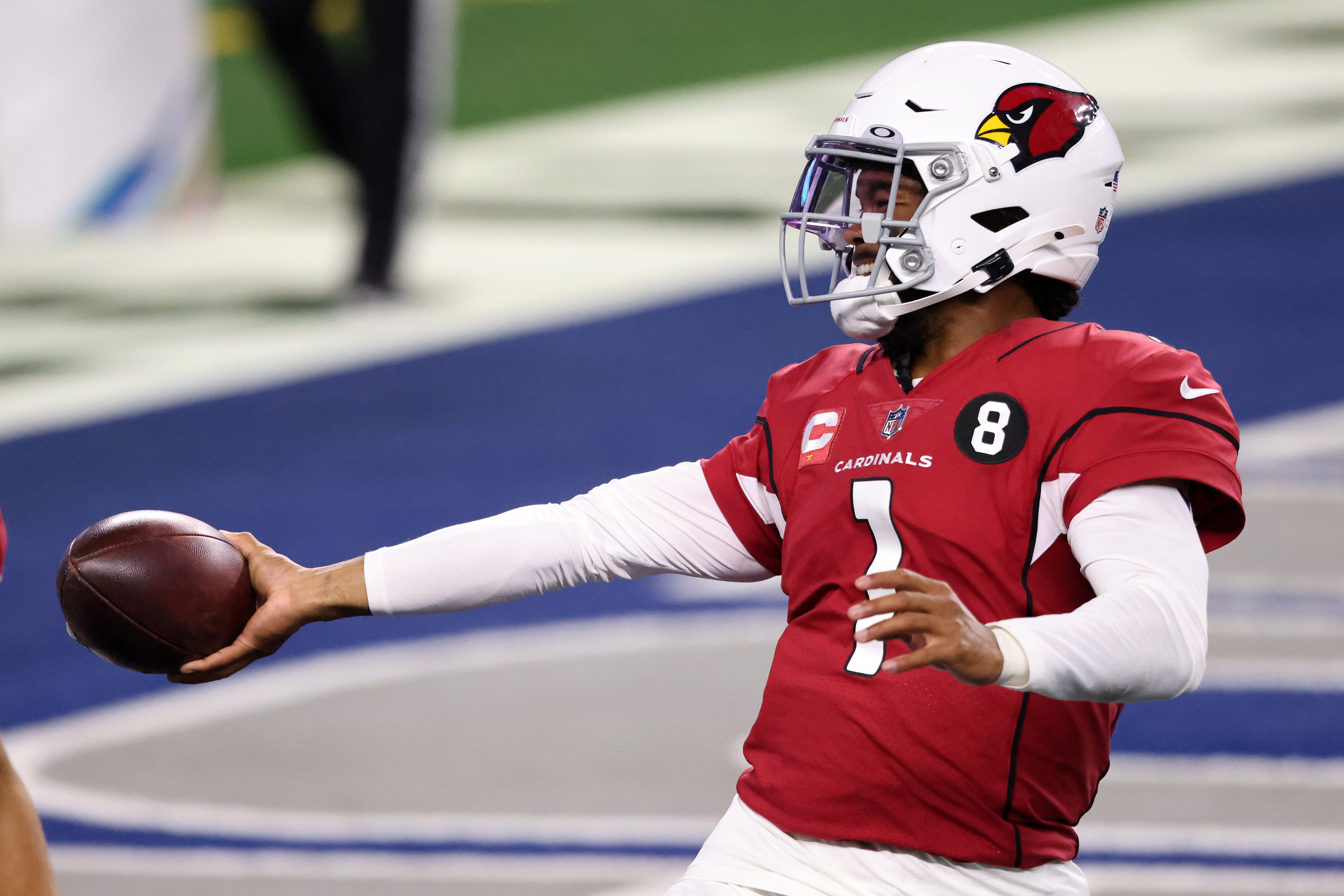 It added up to a banner homecoming for Murray, who finished 42-0 as a high school quarterback in Texas, with three of those wins arriving in state championships played at AT&T Stadium. He won another game in college at Jerry Jones’ palace, leading Oklahoma to a Big 12 championship game win over rival Texas in 2018.

Murray wasn’t prolific on Monday, completing 9 of 24 pass attempts for 188 yards and a pair of touchdowns. But he didn’t need to be. Arizona outplayed Dallas in every facet of the game.

Murray added 74 yards and a touchdown on the ground. Kenyan Drake met little resistance en route to 164 rushing yards and a pair of touchdowns. The Cardinals outgained the Cowboys 438 yards to 344 and won the turnover battle, 4-0.

After digging a 21-0 hole, the Cowboys had little choice but to force the passing game through their backup quarterback. Dalton completed 34 of 54 attempts for 266 yards with two interceptions. His only touchdown arrived via a meaningless pass to Amari Cooper with less than three minutes remaining.

Dallas managed just 97 yards on the ground with Elliott tallying 49 yards, and his two fumbles, on 12 carries.

With the win, the Cardinals improve to 4-2 to keep pace in a hyper-competitive NFC West.

For the Cowboys, there is one note of solace following Monday’s overwhelming loss. Somehow they remain atop the NFC East with a 2-4 record.

The NFL’s worst division came away from the weekend with a single win that the New York Giants claimed in an intra-division game against Washington. The Giants, Philadelphia Eagles and Washington are still looking up in the standings at Dallas with one win each.

But that’s of little comfort to a Cowboys team reeling six games into a season that started with championship hopes.

Steve McManaman: Real Madrid are an aging team. They need new players if they want to reach their previous heights
ISCO could move to Sevilla in January. Lopetegui is personally Interested
Bilyaletdinov about the Champions League: Loco can leave the group. Unmotivated Bayern can be beaten in the 6th round
Zlatan Ibrahimovic: I Thought about retiring, but I wanted to change the mentality of Milan
Vasco da Gama sports Director: Balotelli will be like Maradona for us
Real Madrid won't buy Mbappe in the summer of 2021 due to the crisis (Le Parisien)
Ibra scores in 39, Buffon drags in 42, Ronaldo has no plans to finish. Is football really getting old?
Source https://www.aol.com/article/news/2020/10/20/kyler-murray-cardinals-torch-cowboys-who-somehow-remain-atop-nfc-east/24656875/