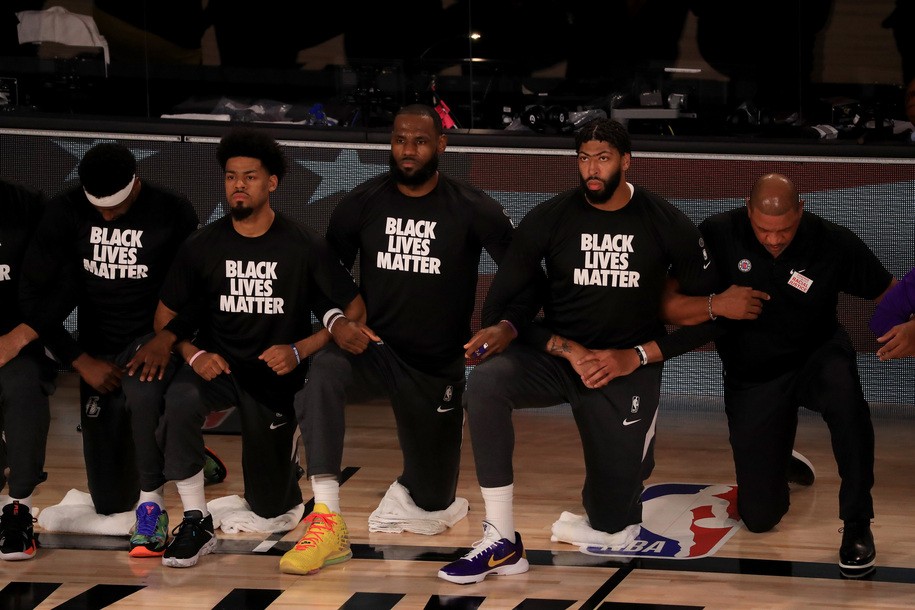 LeBron James' More Than a Vote has been quietly omnipresent in voter education efforts this campaign season. It has teamed up with Michelle Obama's group to hold get-out-the-vote "celebrations" throughout the country. It has successfully recruited volunteer poll workers, and James himself was instrumental in pressuring team owners to open safe voting sites in sports arenas.

Now that Election Day is just two weeks away, a new partnership will be focusing on rapid response to misinformation efforts targeting Black voters. Propaganda meant to intimidate Black voters or mislead them about their voting rights has popped up in every recent election, and is especially prevalent as Republicans panic this season. The new partnership with Win Black aims to identify and counter that misinformation as it spreads.

It's called "Under Review," and according to The New York Times will consist of celebrity and activist-hosted videos that will "take on political misinformation targeted at suppressing the Black vote." Those videos will be "featured" on Snapchat from now through Election Day.

In an interview with the Times, James emphasized the importance of getting information to Black communities that haven't "been given a lot of information along the course of time" on the importance of voting and doing their "civic duty." James said, "I want to give them the right information, I want them to know how important they can be."

Suppressing the votes of Black Americans has been the conservative game plan since, literally, the end of the Civil War. It continues today in misinformation campaigns, insufficient polling places in majority-Black neighborhoods, and intimidation efforts—all backed by courts packed with conservative ideologues intent on maintaining those well-worn tools. It’s on the rest of us to counter those plans, and defeat them.

We are facing a national shortage of poll workers. Help prevent long lines at the polls, or even the closure of polling sites, by signing up to become a poll worker in your area with Power the Polls.

Joao Felix: Atletico are missing Suarez and Costa
Loko didn't know what to do when Red Bull scored first. Naumov about 1:3
Gasperini about Atalanta: we will Go to Amsterdam with a small advantage
Striker Berisha Of Salzburg: We were better than Loko and deserved to win
Pep on city's 1st place in the Champions League group: we played very well in all the matches
Shakhtar defender Vitao on 2:0 with Real Madrid: the main Thing is not to fly too high in the clouds
Kiknadze and Meshcheryakov-out! Rabiner after Loko's defeat by Red bull
Source https://www.dailykos.com/stories/2020/10/22/1988354/-LeBron-James-More-Than-a-Vote-partners-with-Win-Black-to-fight-propaganda-aimed-at-Black-voters