It's the most provocative moment of the video for the music wunderkind's latest hit single, "Industry Baby," a song that chronicles his rise to the top and raises a giddy middle finger to his naysayers.

The video provoked extreme reactions: some loved it for its catchy, trumpet-heavy tune and the focus on a smirking and glistening Lil Nas X. But others were outraged by the gay, Grammy Award-winning pop star for offending them with the video's homoeroticism. Homophobic backlash erupted on social media -- and it didn't stop there. 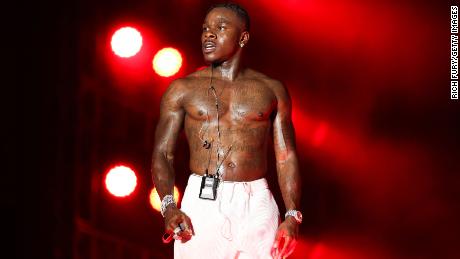 In the same week, rapper DaBaby was recorded insulting gay men and sharing misinformation about HIV during a performance at the music festival Rolling Loud. DaBaby's comments evoked an immediate, negative response, with artists like Dua Lipa, Madonna and Elton John chiming in about the inaccuracy and bigotry of his rant.
DaBaby didn't mention Lil Nas X, but rappers including T.I. and Boosie were quick to make a connection to the artist and the "Industry Baby" video, with Boosie going as far to use homophobic slurs and threatening to "beat [Lil Nas X's] a**."

In the face of it all, Lil Nas X did what he does best: double down and tweet.

"i usually don't respond to negativity from my peers. but this had to be said," the rapper said on Twitter, sharing a link to his own music video, letting it speak for itself.

Lil Nas X's unapologetic commitment to his identity has become even more essential in the wake of DaBaby's comments. He's proven he's not successful in spite of his sexuality -- he's successful because he embraces it. In the process, he's carving out a new space for the future of LGBTQ musicians to express themselves without limits.

"Lil Nas X is absolutely important, but he also is very much built on a history of other Black, queer and queer-adjacent artists who walked so he could run," said Alfred Martin, a communications professor at the University of Iowa who researches Black and queer media studies.

Little Richard, who rose to fame in the 1950s, often wore makeup and pioneered high-falsetto, camp performances. Sylvester, a disco, R&B and soul singer was known for his androgynous appearance. Prince, who never indicated he wasn't heterosexual, took cues from both and others like them, flipping gender norms and helping pave a path beyond the set ideals of masculinity in the industry.

Even as flipping gender norms in the arts grew more mainstream, many queer musicians still tried to set some boundaries between their professional and personal identities, in an effort to circumvent overt discrimination. It was often easier not to be 100% open about every aspect of their sexuality.

Lil Nas X, who came out to the world at 20, stands out because he doesn't hide any element of his identity -- not in his music, his social media presence or his live appearances.
There are other contemporary Black musicians who have challenged gender norms or come out while in the spotlight. Frank Ocean sang about a male love interest on his debut album, "Channel Orange," and opened up about his sexuality in 2012. Tyler, the Creator comfortably wears wigs and dresses in performances. Lil Nas X has even thanked them for making it easier for him to be where he is.

But pushing boundaries has always been a staple specific to rap, said Matthew Oware, a sociology professor at the University of Richmond who researches race and gender identities in pop culture

This goes back to rappers first including explicit language, content and controversial political statements, as heard in "F*** Tha Police" by N.W.A.

"There's still that general sentiment that this type of rapper, a gay, male rapper, isn't representative of masculinity," Oware said. "What Lil Nas X is doing by upping the ante is no different than what we see a stereotypical, heterosexual rapper do by upping the ante in their lyrics."

In both Lil Nas X and DaBaby's videos, the rappers perform shirtless, sing about sex and speak to their successes. But Lil Nas X receives backlash much more often because of what he represents.

"Queerness generally, but Black queerness specifically, still functions as this kind of scarlet letter for many folks who want to work within the media and culture industries," Martin said, adding that rappers are still more likely to cling to hypermasculine values, which makes it hard to accept queer artists.

This shows in the way many rappers defended DaBaby's comments, while the backlash largely came from those outside the genre, Martin said. For a long time, Black queerness specifically was used as a joke in media, Martin said, and it's hard for those deeply immersed in the rap world to break out of that mindset.

"As a man who has had to make his own way from very difficult circumstances, having people I know publicly working against me -- knowing that what I needed was education on these topics and guidance -- has been challenging," his apology said.

His apology came after music festivals he was supposed to perform at, including Lollapalooza and the Governors Ball Music Festival, canceled his appearances. Austin City Limits, the iHeartRadio Music Festival and Music Midtown canceled his scheduled appearance shortly thereafter.

"In this particular moment, we have DaBaby saying these really uninformed things about HIV/AIDS -- but because of all of the work that these other artists were able to do, we get to see this swift takedown of DaBaby," Martin said.

Carving out a future for LGBTQ creators in the music industry

The ripples of Lil Nas X's success may not immediately lead to a flood of queer, Black creators into the music industry, Martin and Oware said. Lil Nas X is the first star of his kind -- Black, gay, genre-bending, Gen Z and award-winning.

In addition to promoting his own projects, Lil Nas X uses social media to uplift others, too, retweeting fans and inspiring followers with his open persona. His music videos and tweets are playful, a perfect example of the kind of humor he has perfected. He's an artist who thrives on provocation and shattering expectations with a complete disregard for the people who don't get it. All those traits, most of all his confidence, are what infuriate his haters -- and endear him to fans.

"The issue with being the first is often that the first also becomes the last for a really long time," Martin said. "Black queerness has only very recently become really legible as something other than a punchline. There's a lot of work, of undoing that needs to get done. And Lil Nas X might be part of that undoing."

And after "Industry Baby" debuted at number two on the Billboard Hot 100 charts Monday, let the undoing continue.