A Louisiana pastor who was charged last week for violating the governor's coronavirus ban again defied orders and held services at church for Palm Sunday, one of the most significant religious observations for Christians. Pastor Tony Spell, the leader at Life Tabernacle Church in Baton Rouge, told CBS News in an email that more than 1,200 congregants attended on Sunday.

Since Louisiana Governor John Bel Edwards put forth a ban on gatherings of more than 10 people last month to stop the spread of coronavirus, Spell has continued to have worshippers at the church. He was arrested and given misdemeanor charges for violating the ban. That didn't stop him – or 1,220 people from attending on Sunday.

"We derive our inalienable rights from God, not any government," he told CBS News on Monday. 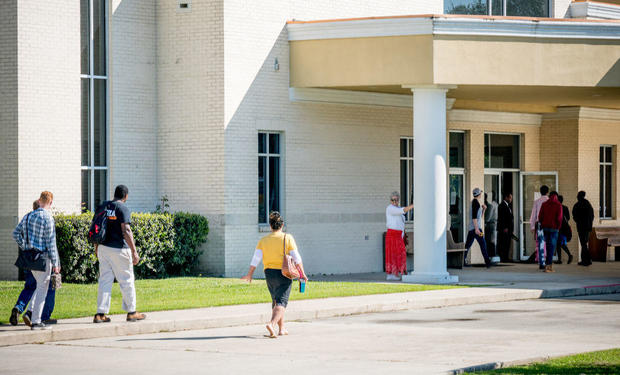 Congregation members enter the Life Tabernacle Church for a Palm Sunday service in Baton Rouge, Louisiana despite statewide stay-at-home orders due to the coronavirus. CLAIRE BANGSER

Spell said attendees did observe six feet of distancing at the services, but did not wear face masks. The pastor said the church is cleaned daily and boasted it's cleaner than open gas stations, Walmart and Sam's Club.

Spell confirmed to CBS News that he is preparing to sue over the governor's ban. Joe Long, Spell's lawyer, told Reuters that he believed Edwards' order violated the U.S. constitutional rights to freedom of religion and to peaceably assemble. States like Florida, North Carolina and Arizona have exempted religious services from their state-wide stay-at-home orders. However, Louisiana has not.

"We believe the governor is wrong," he said. "And we look forward to proving our case in court."

CBS News reached out to Long about the pending lawsuit, but did not immediately hear back.

After being arrested he last week, he continued to defend the gatherings despite the state-wide order.

"We are not posing any more threat with COVID-19 than people who are at Walmart by the hundreds right now," he said. "Do not close the church's doors as long as one retailer in this city is open."

Unlike Spell, some religious services have gone online.

"We decided to do virtual services after we heard the projections for the number of cases that were expected at that time, and now we see that it has become a reality," said Rev. Calvin Butts, a New York City-based pastor. "And we were convinced that the health and safety of our congregants comes first."

Zlatan scored 8 goals for Inter Milan. More than any other team
Alli is not training with Tottenham due to negotiations with PSG. He does not want to let Levi go
Batshuayi scored in the Premier League for the first time since October 2019
Valdarno about leaving the Youngster rent in the Arsenal and Real Madrid Player should not be so quick to give up. He did not have enough patience
Ighalo has announced his departure from Manchester United
Papu Gomez moved to Sevilla from Atalanta for 5.5+3 million euros
Carlo Ancelotti: I have a huge desire to lead Everton to the Champions League
Source https://www.cbsnews.com/news/tony-spell-louisiana-pastor-coronavirus-ban-palm-sunday-services/

Where is the storm? These satellite images show it poised to blast Bay Area

'Take The Politics Out Of The Census,' Biden's Commerce Pick Raimondo Says

A Showdown Over COVID Restrictions Looms in Israel

Valentine’s Day gifts for your best friend: 15 ideas to buy your Galentine

Schumer: Democrats must pass virus aid with or without GOP

Greg Norman speaks out on his ‘hilarious’ viral bulge photo

Tennessee angler says he caught possible record-breaking fish, threw it back in the water

A vote forced by Sen. Rand Paul on whether Trump's impeachment is constitutional fails to advance but offers clues ahead of the trial

Opinion: Why I'm An Invisible Man In The Global Vaccine Campaign

Stars Remember Kobe Bryant on the One-Year Anniversary of His Death: ‘Rest in Power’

Nurse To Be Selected As Acting Surgeon General

The Lessons of the Alcee Hastings Impeachment

“My boyfriend is literally trying to kill me!” Suspended Chicago cop charged in gambling case to remain jailed after alleged domestic attack

Waymo CEO Tells Tesla Their Autonomous Car Diving System Is, 'Not How It Is Done'

Ex-Zappos CEO was locked in shed with liquor, 'whippets' before fatal fire

WME and WGA Postpone Trial to February 2022 as Talks Continue

‘The Blacklist’ Gets Early Season 9 Renewal By NBC

‘The Blacklist’ Renewed for Season 9 at NBC

Catch up: Leon Black will step down as C.E.O. of Apollo after an inquiry found he paid $150 million to Jeffrey Epstein.

C.D.C. officials say most available evidence indicates schools can be safe if precautions are taken on campus and in the community.

Democrats introduce bill to raise minimum wage to $15 by 2025