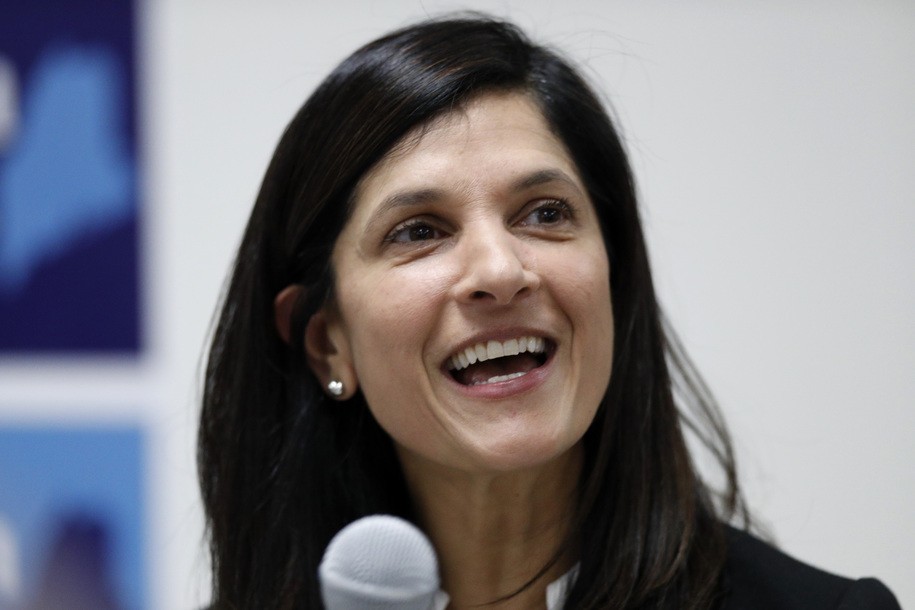 Eliminating Linn and reallocating his few supporters according to their second-choice preferences leaves the race largely unchanged—and with no one winning a majority: Gideon is at 48, Collins 47, and Savage 5. But drilling down to the third choices of Savage voters benefits Gideon, making her a 51-49 winner over Collins.

Some other recent surveys have asked voters about their second choices and have similarly found Savage supporters preferring Gideon to Collins, but none we're aware of have included third choices in order to replicate the entire process. At a debate last week, all four candidates said they would respect the outcome of any instant runoff, a contrast with former Republican Rep. Bruce Poliquin, who unsuccessfully challenged the system in 2018 after losing to Democrat Jared Golden in the 2nd District.

● MN-Sen: Republican Jason Lewis has been discharged from the hospital two days after undergoing emergency surgery for a hernia that his campaign said was potentially life-threatening. His team did not say whether he'd return to the campaign trail ahead of Election Day in his longshot bid to unseat Democratic Sen. Tina Smith.

Meanwhile, a new SurveyUSA poll for local media finds Democratic Sen. Tina Smith with just a 45-42 lead on Lewis—a touch better than the 43-42 edge the same pollster gave the incumbent in the middle of the month, but still closer than almost every other public poll. However, none of the major outside spenders, including Mitch McConnell's extremely flush Senate Leadership Fund, have gotten involved. Joe Biden has a slightly larger 47-42 advantage, though it's worth noting that his campaign just announced he'd make a last-minute stop in the state on Friday.

● SC-Sen: A brand-new mystery super PAC called Liberty SC has spent at least $1 million so far to boost Constitution Party candidate Bill Bledsoe in the race between Democrat Jaime Harrison and Republican Lindsey Graham, but as Business Insider notes, the group won't be required to disclose its donors until after the election. However, its FEC filings show its spending has been directed to firms with Democratic ties, and the content of its advertising makes clear that its goal is to peel away conservative voters from Graham by encouraging them to support Bledsoe instead—a tactic that Harrison's own campaign has pursued for some time.

Graham has finally issued a direct response to this threat, with an ad attacking Harrison's efforts to prop up Bledsoe, who dropped out at the start of October. What's surprising, though, is that Graham's spot doesn't feature any footage of Bledsoe, who could easily disavow Democratic attempts to boost his ghost campaign, even though he endorsed Graham when he quit the race.

● Polls: We're getting close to the end here, folks!

NH-Gov: ARG's numbers are by far the closest we've seen of this seldom-surveyed race, but almost all the other polls to date resemble YouGov's.

National Democratic groups hadn't shown any interest in this race after Bishop narrowly beat Democrat Dan McCready 51-49 in a special election last year after 2018's results were thrown out due to Republican election fraud. However, the district has since become about a point bluer on the presidential level as a result of court-ordered redistricting and now sits at 54-43 Trump. In addition, about 20% of the revised district's voters are new to Bishop.

Wallace hasn't raised all that much by today's lofty standards, but Bishop hasn't exactly raked it in either, perhaps not anticipating a serious challenge. Polling elsewhere in North Carolina has suggested we could see some large regional shifts against Trump, though an upset here would be a major shocker.

● NJ-03: Freshman Rep. Andy Kim apparently feels so confident about his re-election chances against Republican David Richter that his campaign recently donated at least $8,000 to fellow Democrats whom he presumably thinks are in greater need than he is. As cataloged by Greg Giroux, Kim has given $1,000 apiece to two challengers, Hiral Tipirneni in Arizona's 6th Congressional District and Cameron Webb in Virginia's 5th, as well to half a dozen members of his caucus, including Peter DeFazio in Oregon's 4th District.

Two years ago, this development would have been almost impossible to anticipate. Kim's narrow victory in 2018 was one of the biggest upsets of the midterms, and his bid for a second term in this expensive district that straddles the Philadelphia and New York City media markets had long looked like it would be one of the hardest holds for Democrats this year. But Richter proved to be a weaker-than-expected candidate—a wealthy self-funder who simply hasn't self-funded enough—and amid an ugly environment for the GOP, Republican outside groups have paid him almost no attention.

We recently moved this race from Tossup to Lean Democratic, but it's possible Kim thinks he's even more secure than that rating would suggest. However, it's worth noting that he was still asking for contributions as of Thursday—to his own campaign.

● Independent Expenditures: The House Majority PAC, which is the largest Democratic super PAC involved in House races, reported $38 million in new spending for the final week of the election with the FEC on Wednesday night. Most of the outlays come in races where outside groups, including HMP, have long been active, but a few are notable:

We'll have a final roundup of all House spending by the top four groups just before Election Day.

We have a big battle ahead of us. Conor and Sergio Ramos agreed to a fight
Tuchel on the match with Manchester United: Victory is mandatory. Coming to England for her is a big challenge
Jimenez will miss Atletico's games with Real Madrid and Salzburg due to a hip injury
Gladbach midfielder Neuhaus: it's a Pity that we didn't close the issue with reaching the 1/8 final of the Champions League. Let's clear this up in Madrid!
Ex-Manchester City and Arsenal defender Gael Clichy moved to Servette
Son of Maradona: number 10 should be withdrawn from circulation in Barca and other teams of his father
Diogo DotA: Ronaldo was my hero. For children from Portugal, he was always an example
Source https://www.dailykos.com/stories/2020/10/30/1990815/-Morning-Digest-Maine-s-instant-runoff-could-benefit-Sara-Gideon-thanks-to-left-leaning-independent

McConnell chokes up in emotional tribute to retiring Tennessee senator

Stay home for the holidays or get tested twice, CDC urges

‘Motorheads’: Teen Drama Series In The Works At IMDb TV With John A. Norris & Cavalry Media

Heartbreaking letters to Santa: ‘Please get me a power wheelchair’

CVS to Give Out Covid-19 Treatment in Nursing Homes

Obama suggests slogans like 'defund the police' are counterproductive

Gloria Estefan reveals she had COVID-19, is now recovered

US rules only dogs count as service animals on planes

The Deep State Is on a Roll

Biden to Discuss Virus-Weakened Economy Amid Stalemate Over Aid

Chinese spacecraft collects moon samples to take back to Earth

Forget PS5: Xbox Game Pass is the best gaming gift of the holidays

Nike faces backlash in Japan over ad that takes on racism

Stocks hover near records in midday trading on Wall Street

Congratulations! These are the 11 new Magical Towns of Mexico

Get the new Yahoo Mobile Phone for just $19.99 this holiday season

‘The Masked Singer’ Renewed At Fox For Season 5

‘The Masked Singer’ Renewed for Season 5 on Fox

4 Simple Steps to Overcoming Your Fears

Trump to award Medal of Freedom to Lou Holtz

Elliot Page’s Vulnerability Is a Gift to the Trans, Nonbinary Community

Kelly Clarkson Opens Up About The Hardest Part Of 'Horrible' Divorce

Obama Calls on Democrats To Give AOC a Bigger Platform

The past 24 hours in Trump’s legal issues and pardon news, explained

DACA recipients won at SCOTUS, but odious Republicans are still trying to kill the program elsewhere

Years after coming out, gay athletes upset by lack of change

Elliot Page's 'Umbrella Academy' role will not be changed: report

Virgin Galactic May Attempt a Rocket-Powered Test Flight Next Week