The remains of MOVE bombing victims thought to have been cremated and disposed of have been found, according to Philadelphia Mayor Jim Kenney. The discovery came a day after city Health Commissioner Dr. Thomas Farley was forced to resign for ordering the remains to be cremated in 2017.

Kenney says he was notified Friday afternoon that a box labeled "MOVE" was found in a refrigerated area of the Medical Examiner's Office. After comparison, Kenney says the remains appear to be the bone fragments that were ordered cremated by Farley four years ago.

Farley's resignation and the revelation came on the 36th anniversary of the 1985 bombing of the headquarters of a Black organization. Five children were among the 11 people killed when police bombed MOVE's headquarters, causing a fire that spread to over 60 row homes. 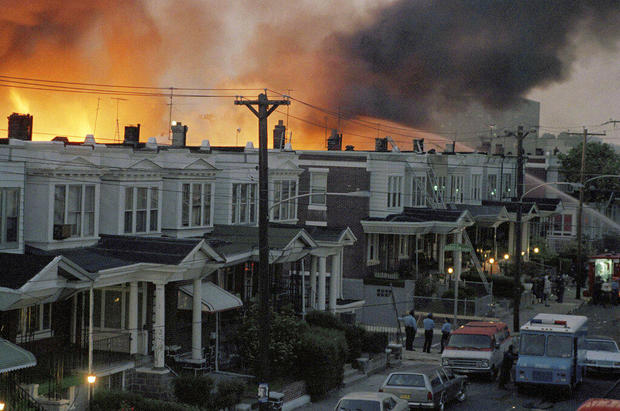 In this May, 1985 photo, scores of row houses burn in a fire in the west Philadelphia neighborhood. Police dropped a bomb on the militant group MOVE's home on May 13, 1985 in an attempt to arrest members, leading to the burning of scores of homes in the neighborhood AP

Kenney announced the discovery in a statement late Friday night.

"I am relieved that these remains were found and not destroyed, however I am also very sorry for the needless pain that this ordeal has caused the Africa family," Kenney said. "There are many unanswered questions including why the remains were not cremated as Dr. Farley directed. There are also clearly many areas for improvement in procedures used by the Medical Examiner's Office."

"The investigation of this incident and the handling of the remains of all victims of the 1985 MOVE bombing will continue. I pledge full transparency to the family of the victims and I hope that this latest discovery can give them some level of solace."

The mayor says the remains will be returned to the Africa family after an investigation is concluded.

Kenney has appointed Dr. Cheryl Bettigole as Acting Health Commissioner and a national search process will be done to fill the position for the rest of Kenney's term.

These remains are separate from those that were revealed last month to have been kept by the Penn Museum and later misplaced by researchers at Princeton after being transferred there.