The most consequential election in our lifetimes is less than a week away.

By now, I expect many of you who are reading this have made up your minds about who you want to be president of the United States in 2021 and to serve you in the U.S. House and Senate. However, I suspect some of you still need to be convinced of something: To go and cast your ballots.

Nevertheless, it is vitally important that you vote — and that you encourage and help your friends and family to vote.

It is especially important for you if you want to see President Trump in a second term. If all of President Trump’s supporters turn out — and all their friends and family members turn out — he will win in a landslide so large that no amount of ballot fudging will be able to overcome it. It could also help mitigate post-election resistance by Democrats in Congress (notice I said mitigate, not eliminate).

Democrats spent most of Trump’s first term trying to get him out of office — much to the country’s detriment. If he is reelected by a large enough margin, enough of the Democrats may realize they should stop #resisting and start governing again.

If you consider your community Trump Country, and you couldn’t imagine it going for former Vice President Biden — or other Democratic candidates — think again.

In 2018 we saw a slew of Democratic upset victories in places that have been traditionally safe for conservatives. This is what turned Joe Cunningham into the first Democrat to represent South Carolina’s 1st Congressional District since Rep. Mendel Jackson Davis retired in 1981. In Utah, two-term Republican Rep. Mia Love lost her supposedly safe seat to Democrat Ben McAdams by less than 700 votes.

If you think you live in an area that is hopelessly blue and your vote doesn’t matter, consider the Republican takeover of Congress in 2010, in which we picked up 63 seats.

Massachusetts had not elected a Republican senator since 1972. No one in the political class believed a Republican could win a statewide federal election there. But in 2010, Republican Scott Brown beat out a Democrat to finish the late Sen. Ted Kennedy’s term by 108,000 votes (52 percent of the total).

The same year, Joe Walsh — who had been living out of his car late in the campaign — ousted Democratic Rep. Melissa Bean by fewer than 300 votes in the Chicago suburbs.

No matter where you live, you cannot believe polls. Nearly all the major national polls were dead wrong in 2016, and nothing substantial has changed in the way that these same Washington Beltway pollsters are surveying Americans today. They continue to over-sample Democrats, under-sample Republicans, and focus on largely liberal urban and suburban areas while ignoring the middle of the country. There is no reason to believe the big Biden lead some of these polls are reporting.

But on Election Day, Reagan won a landslide 489-49 Electoral College victory over Carter. This is largely because Reagan was so strong during their single televised debate held a week before Election Day.

Perhaps the most historic example of how wrong polls can be was the election of President Harry S. Truman in 1948. The political elite were so thoroughly convinced that Republican New York Gov. Thomas Dewey was going to win that the Chicago Daily Tribune pre-printed the post-election paper with “DEWEY DEFEATS TRUMAN” to manage around a printers’ strike. 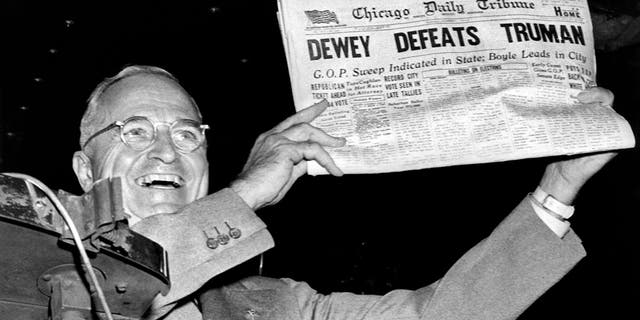 Truman won with 303 to 189 electoral votes, and the photo of him gleefully holding up the Tribune’s embarrassing front page is an iconic reminder that American elections are never predictable — and every vote matters.

Of course, the most recent, significant example of why every vote matters is Trump’s victory over Hillary Clinton in 2016.

As I have watched the 2020 campaign cycle, I have seen a lot of the same patterns being repeated by the political elite and Washington establishment. They think they have this one in the bag.

So, vote, make sure all your loved one’s vote, and let’s prove them all wrong again.

Neymar on Maradona: You will always remain in our memory. Football is grateful to you
If football was a movie, Diego would be its main character. Showsport readers say goodbye to Maradona
Napoli fans held a fire show in front of the stadium in memory of Maradona
Maradona signed documents about embalming and exhibiting. Family didn't know
Zorc about the future of Holland: We have long-term plans with him
Juve will play with Genoa, Inter against Fiorentina, Milan-Torino and other pairs of the 1/8 final of the Italian Cup
Musa about Sheffield: I want to play at the top level, with all due respect to this club
Source https://www.foxnews.com/opinion/election-vote-biden-trump-newt-gingrich