That could change this week.

A shot at snow and ice is in the forecast for the Northeast Tuesday and Wednesday. New York City could see a wintry mix on Tuesday, making commutes hazardous. The city is under a winter weather advisory through midnight with snowfall amounts around an inch and a glaze of ice possible.

The ice will make travel exceptionally treacherous. There could also be potential power outages with the accumulation of ice on trees and power lines. This will be the first time many Northeast areas along the Interstate 95 corridor will see measurable snowfall since mid-December.

New York City is currently running about 5.5 inches below normal for snowfall for the month of January. This entire season, much of the areas surrounding New York City have received less than an inch of snow.

New York City isn't alone. Even Boston is running well behind for snow. January 2021 has been the least snowiest January on record for Boston. Boston should have more than 10 inches of snow in January, and the city hasn't even received half an inch.

Philadelphia hasn't seen more than a trace of snowfall in January, and even Portland, Maine, is nearly a foot below normal for January snowfall. 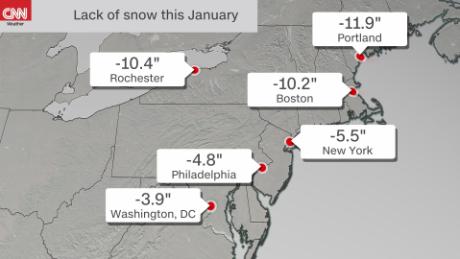 Is La Niña to blame?

We are currently in a La Niña pattern and it's expected to last the rest of the winter. This phenomenon that occurs along the equator, has weather consequences around the world.

In the US, we typically see wetter than normal winters for the Northeast, but blaming the lack of snow solely on La Niña is tricky.

"It is difficult to say how much of an impact the La Niña we are currently in is having on the lackluster snow season in the Northeast thus far this winter, but it does fit the pattern," says CNN climate expert Brandon Miller.

"The winter outlook from NOAA, issued before the season began, called for warmer than normal temperatures for the entire East Coast, largely because of the jet stream's usual response to La Nina", says Miller. The warmer than average temperatures do not always correlate to low snowfall seasons, but so far this year they have for large portions of the Northeast.
This week, the Climate Prediction Center has put out their new seasonal forecast, and is forecasting warmer than normal temperatures for the Northeast to last through April.

This won't completely wipe out snow chances for the region, but it could mean more rain and less snow overall. "There also hasn't been a big amplified jet stream this year. This is limiting snow systems from moving through the region. That has resulted in a more southerly storm track, which has brought more snow to some southern locations, and less snow to the cities in the north that typically get snow," Chinchar says. 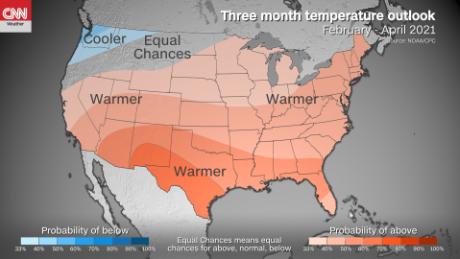 The winter season is still far from over, giving these cities plenty of time to make up for the lack of snowfall. A few long-range forecasts show a slight change in the forecast pattern that will give some of these big cities in the Northeast a better shot of snow during the next few weeks.

There could be another winter storm Sunday into Monday that could bring additional snow to these areas. All it takes is one blockbuster snowstorm to get the snowless cities back on track.

Biden withdrawing nomination of Neera Tanden to be OMB Director

How Andrew Cuomo plans to buck calls to resign: Goodwin

Everything we know about coronavirus variants in NYC

The Absurd Nike Scandal That Has Sneakerheads Losing Their Minds

What we know about the SUV crash near the U.S.-Mexico border that killed at least 13

Stream It Or Skip It: ‘Crazy Samurai: 400 vs 1’ on VOD, a Gimmicky Martial Arts Outing Boasting a Single 77-Minute Shot

This GOP governor has it all wrong on Covid-19

Who Represents Myanmar at UN?

Yoenis Cespedes showcase leaves teams as tempted as ever

Black Females More Likely Than White Females To Be Portrayed As “Smart” In Film & TV, But “Colorism” Persists Around Skin Tone, Says Study

Biden’s outrageous giveaway to federal bureaucrats should enrage you

The pandemic is crushing sleep. Here are 5 tips to help you get better shut-eye.

'The impossible is not impossible': The push to make Covid-19 vaccines at record speed

The best children’s books of all time: 11 old and new classics for kids

John Roberts has another chance to diminish the Voting Rights Act

Job in jeopardy, Gophers’ Pitino ‘not waving the white flag’

Leo Terrell on Dr. Seuss controversy: 'What those books reflected was a sign of the times'

‘The Chi’ Season 4 Release Date: What We Know So Far

What's happening in Texas and Mississippi has to stop

Watch out, PayPal. Square just launched its own bank

A Newspaper Casino? Toronto Star Company Is Getting Into The Online Gaming Business

Plumbers from around the U.S. volunteer to aid a struggling Texas

The GOP is still Trump’s and other commentary

As virus-era attacks on Asians rise, past victims look back

Horse so over-bred rescuers thought she was a cow